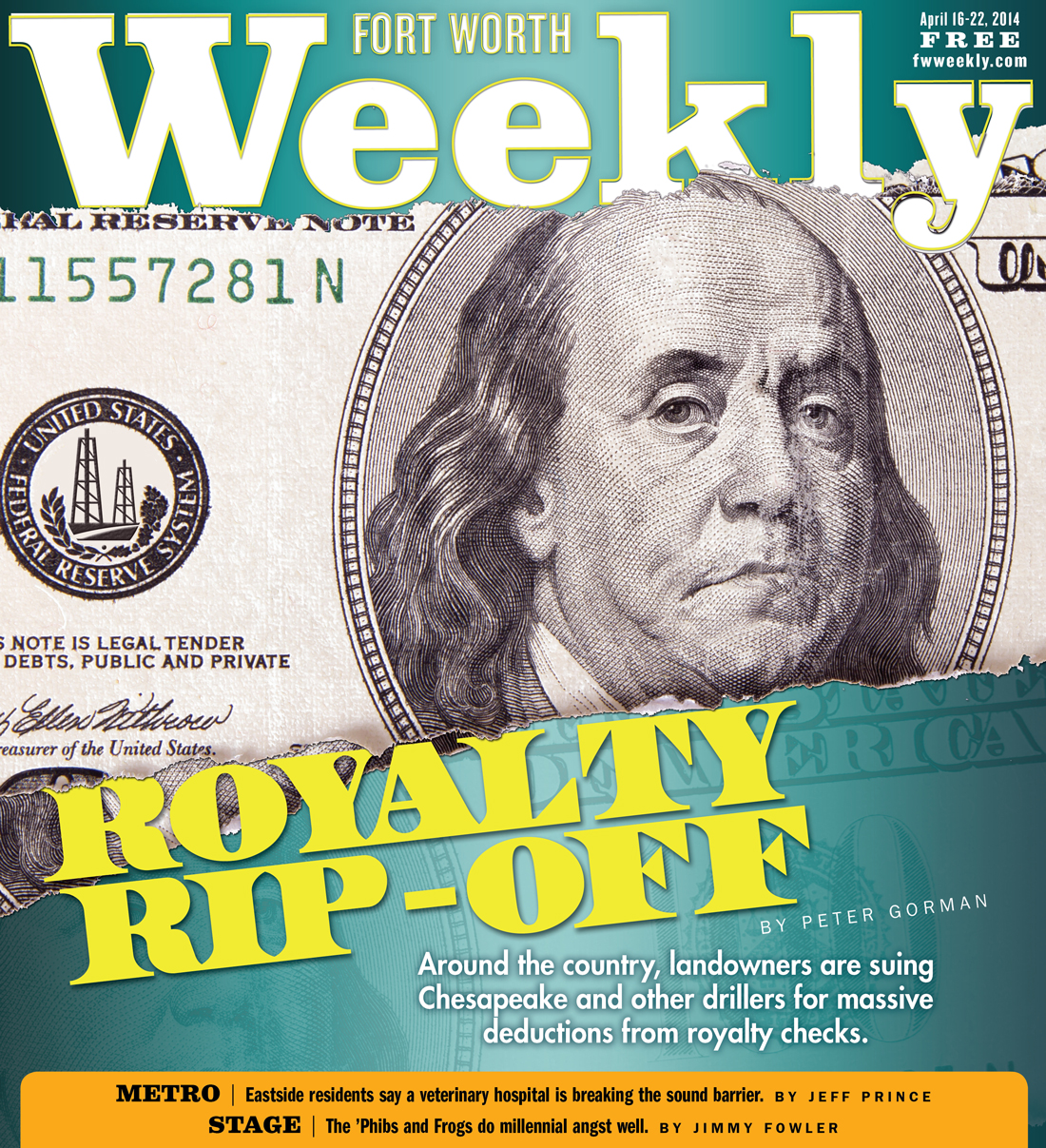 Donald Feusner used to be a dairy farmer. His 370 acres of land in northeast Pennsylvania border New York state in a gloriously lush area. In 2011, when his farm was no longer profitable, he sold off his herd and retired to what he thought would be the life of a gentleman farmer, living off the proceeds of the gas wells Chesapeake Energy had drilled on his land. And in December 2012, when the wells came in, it looked as though he’d made a safe bet: Royalty income from the first month’s production alone totaled more than $8,500.

But five months later, with the wells still producing the same amount of gas, his royalty check suddenly shrank by more than 80 percent, to just under $1,700, eaten away by what Chesapeake called “post-production costs.” In the following months, his checks dwindled even further, to almost nothing.

Harold Moyer, an accountant with the Pennsylvania Farm Bureau who represents Feusner and 150 other royalty owners in northern Pennsylvania, said that Feusner’s lease agreement was bad from top to bottom: It not only let Chesapeake put a large well pad on the property for no extra money, but it allowed the company to deduct post-production costs.

Chesapeake declined to comment on Feusner’s royalties or any other aspect of this story.

Those costs covered every aspect of getting the gas from the well to market: separating out water moisture and other gases, compressing it, sending it through gathering lines, even a fee for selling it. And the deductions weren’t made just from Feusner’s checks. Across Pennsylvania tens of thousands of people who leased their mineral rights saw their post-production costs — which are legal under the terms of most leases — jump from pennies on the dollar to most of that dollar in the beginning of 2013.

Jerry Simmons, executive director of the National Association of Royalty Owners, said the situation in Pennsylvania is the worst case of royalty rip-off he’s ever seen. It’s so bad there, he said, that Gov. Tom Corbett recently asked his attorney general to start an investigation.

Rules vary from state to state on post-production costs and other methods that drillers use to reduce the amount of royalties they pay. But one version or another of the problem seems to be happening all over the country, from shale drilling plays in Ohio to South Texas to the Rockies.

The worst offender is Chesapeake, by several accounts. “There is no question that Chesapeake is the bad actor all over the country, and its actions are being imitated,” said Jackie Root, president of the Pennsylvania NARO chapter. “They’re taking deductions from leases that have ‘no deduction’ clauses, and then they sometimes take deductions that are not legal at all.”

In North Texas, Fort Worth’s wealthy Hyder family won almost $1 million from Chesapeake for what were deemed improper deductions from their royalties on a thousand-acre tract. Two years ago, Dallas/Fort Worth International Airport won $5 million from Chesapeake to settle the airport’s claims of similar malfeasance. Last year, the cities of Fort Worth and Arlington, the Arlington school district, and the Bass family filed similar suits against the company, each for millions of dollars. Those lawsuits could come to trial later this year.

“And what is that to Chesapeake?” asked John McFarland, an Austin oil and gas attorney, referring to the amounts of settlements and judgments, compared to what Chesapeake and other companies bring in. “They just repay what they took plus attorney’s fees. Cost of doing business.”

He wouldn’t hazard a guess about the total value that Chesapeake might have wrongfully withheld from royalty checks in the Barnett Shale.

Gas industry spokespersons say they’re just engaging in prudent business practices that fall within the letter of the law.

But NARO leaders and oil and gas industry attorneys said it’s a rotten way to be the “good neighbor” that the drilling industry claims to be, especially for Chesapeake, a company that in the last decade bought municipal goodwill in North Texas by slapping its brand on everything from Fort Worth’s Thanksgiving parade to its buses. Not coincidentally, Chesapeake’s tactics of squeezing royalty owners became much more aggressive about the same time the company was going through a major financial crisis.

Lawyers and others said the drillers are banking on the fact that few people question what’s going on, and even fewer have the means to take companies to court. The expense involved in auditing, much less suing, huge companies is beyond the reach of all but a very few. Plus, the drillers seldom get fined for their actions even when they are found to be at fault, so the math is heavily weighted in their favor.

“If they get caught once in a while but get away with it most of the time, it’s still a win for the gas companies,” said Steve Townsend, a Pennsylvania lawyer who regularly deals with royalty issues. “There’s really nothing for them to lose.”

Class action suits, a tool by which a limited number of plaintiffs theoretically could push for justice for large groups of royalty owners, have been made much more difficult thanks to U.S. Supreme Court rulings, because of the patchwork of different contracts and state laws involved.

Wrongful deductions for post-production costs are only one tool being used by some gas companies to reduce their royalty outlays. If a lease includes a clause prohibiting post-production costs from being deducted, a company might change the term to “gas enhancement costs” and deduct them anyway. Some companies sell their gas to affiliates or subsidiaries at rates substantially below market value and then pay royalties only on those lower rates. Sometimes pipeline operators will charge several times the going rate to move gas to interstate transportation lines, and the gas company takes that out of royalty money, too. The costs of selling the gas get charged to royalty owners and sometimes an “impact fee” to recoup what the drillers pay in taxes or fees.

In Pennsylvania, landowners are finding out that loans taken out by drillers, with mineral leases as collateral, have led to liens being placed on the real estate itself, even though the drillers own no surface rights. Landowners have even found themselves liable for a driller’s bills — of more than a million dollars in one case.

“There is no end to their creative accounting,” said Moyer.