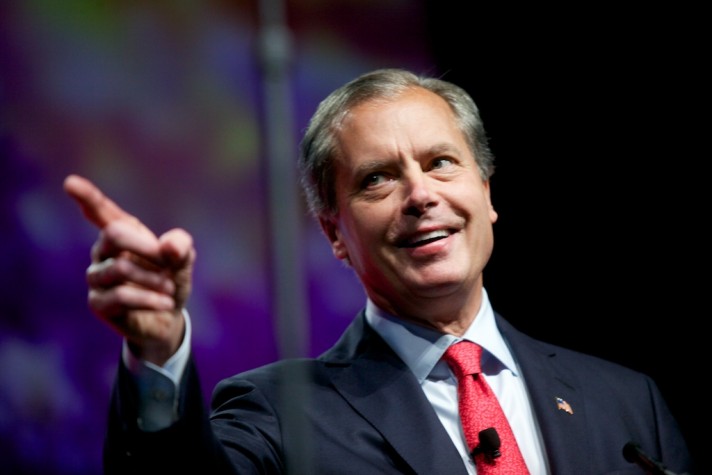 The lieutenant governor — the “lite guv” — is the second most powerful state official in Texas. Here’s what’s going on in the race for the job, why it’s so powerful, and why that could change.

Lt. Gov. David Dewhurst might never have held statewide office if he wasn’t rich. And despite his being an elected official for almost 16 years, a fat wallet may not keep him there. He got 28.3 percent of the vote to State Sen. Dan Patrick’s 41.5 percent in the March 4 Republican primary. He has the uphill chore of getting more than 50 percent in the May 27 runoff to hang onto his party’s nomination for the job.

A recent Dewhurst statewide TV ad attacked Patrick for declaring bankruptcy and then not repaying more than $800,000 in debts to creditors when he got back on his financial feet. The ad says Patrick “also got caught not paying his taxes, pocketed his employees’ payroll taxes, and changed his name from Dannie Goeb to hide from the debts.”

A woman looks into the camera and asks, “If he can’t run his own business honestly, how can we ever trust him to run the state honestly?”

The Austin American-Statesman’s “Politifact Texas” checked out Dewhurst’s new charge that Patrick changed his name to duck his debts.

PolitiFact Texas said The Dallas Morning News reported that Dan Patrick began using that name as a TV sportscaster in the late 1970s and has continued through his bankruptcy filing in 1986 and the follow-up that ended in 1992.

He legally changed his name to Dan Goeb Patrick in 2003 when he was considering running for Congress. Patrick said he wanted to avoid confusion.

PolitiFact Texas called Dewhurst’s claim that the name change was to avoid debtors “incorrect and ridiculous” and rated it “Pants On Fire!”

Look for a raging battle right up to the May 27 runoff. The victor will face  Democratic State Sen. Leticia Van de Putte, in the Nov. 4 general election.

Whoever wins will be the most powerful lieutenant governor in the country, with a mix of legislative and executive powers.

He — Van de Putte hopes to be the first “she” — acts as governor while the governor is out of state and is first in line to become governor if that officeholder dies, becomes president or senator, resigns, is impeached, or is incapacitated.

Under the Texas Constitution, the lieutenant governor also presides over the Texas Senate, the source of considerable legislative power.

Lieutenant governors in several states are picked by the gubernatorial nominee, much like a presidential ticket. But here, lieutenant governors might not even be of the same party as the governor. (For 12 of the 20 years from 1979 to 1999, they were of different parties.)

But those powers come mostly from the Senate rules, passed every two years, and it takes just 16 of the Senate’s 31 members to change them.

They could yank the power to appoint committees and their chairs. They could create a calendar committee to set the agenda. They could even pick their own leader to preside, as do the U.S. Senate and most states.

Basically, senators  could save most of the lieutenant governor’s power in the Senate for themselves.

In the House in 2009, 11 Republicans teamed with most House Democrats to elect Republican Joe Straus as speaker.

Several returning senators think Patrick is a self-serving, demagogic hot dog. If just five of the 19 or 20 Republicans teamed with 11 Democrats next January, they could jerk the gavel and choose (probably) a Republican leader. Or, if Van de Putte wins, Republicans would be able, without Democratic cooperation, to take away most of her powers.

Not a cinch to happen. But it could.