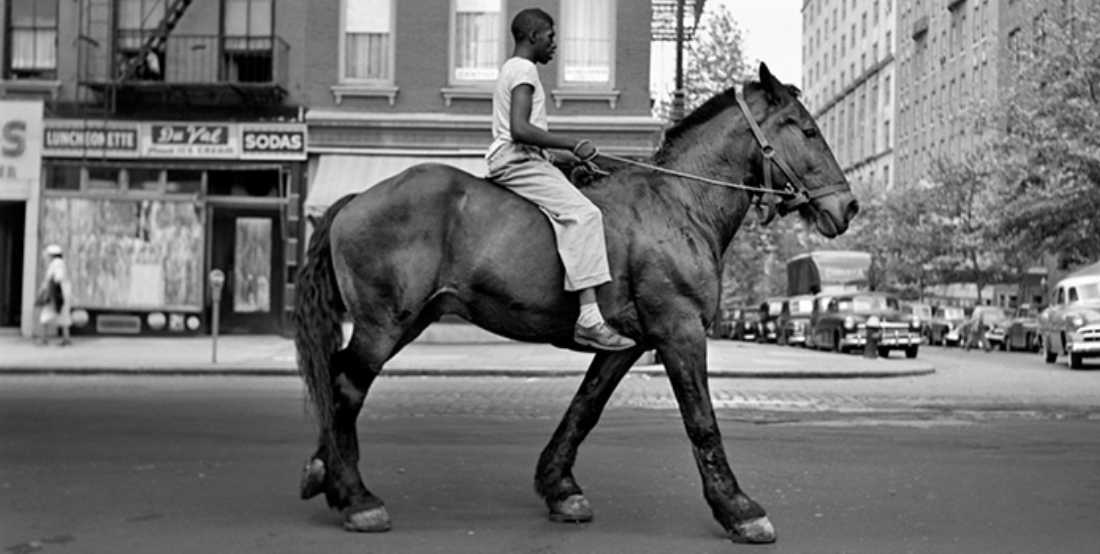 This story began in winter 2007, when real estate agent John Maloof, a habitué of flea markets and storage auctions, bought a box of photo negatives hoping to find something he could use in a history volume he was planning to write. The pictures were of every description — landscapes, portraits, scenes of urban life — and while Maloof couldn’t use them for his book, he sensed that they were good even though he didn’t know much about photography. He posted some 200 pictures on his personal blog, and both amateurs and professional photographers reacted to the pictures with astonishment. He had a name for the artist, Vivian Maier, but no other information. Maloof became obsessed with finding out who this woman was, what drove her to take these photographs, and why she had never shown them in public.

And so we get Finding Vivian Maier, a documentary that fits the “This weird thing happened to me, I wonder what the story is” template. The thin, bespectacled, young Maloof functions as our onscreen narrator and interviewer as he digs up people who knew Maier, who worked for decades as a housekeeper and nanny in the Chicago area. Everyone remembers a tall woman with a Frenchified accent who took large steps and wore all-covering men’s clothes. Most of the children she took care of remember a caregiver who loved them as her own and took them on fun outdoor adventures, though a few remember a mean, physically abusive woman. The parents who employed her (including the famed TV talk show host Phil Donahue) remember an eccentric who took considerable measures to hide her past. Nobody had any idea that she was a dedicated photographer, despite the fact that she frequently carried around an ancient Rolleiflex camera.

Attempting to track down where the artist came from, Maloof and co-director Charlie Siskel follow the trail all the way to a tiny village in the French Alps where Maier took photos 10 years apart. For all their efforts, their dramatic payoff isn’t nearly as satisfying as the one in Malik Bendjelloul’s Searching for Sugar Man or as unsettling as the ones in Marshall Curry’s If a Tree Falls or Arnon Goldfinger’s The Flat. You may not find Maier, who bore signs of early-life sexual abuse and eventually became an antisocial hoarder, as fascinating as the filmmakers do.

Still, her work is more than worth the price of admission. Her instinctive sense of composition, her sense of humor, her great empathy for the poor and homeless subjects she encountered, and her flair for capturing the character of old people and children she ran across on the street are all very much in evidence in her more than 150,000 pictures. Photography guru Joel Meyerowitz also sheds some valuable light on how the Rolleiflex allowed Maier to take such intimate pictures, as well as explaining the mix of gregariousness and solitariness that often makes up the temperament of street photographers. The quality of these pictures is enough to make us grateful that they survived.