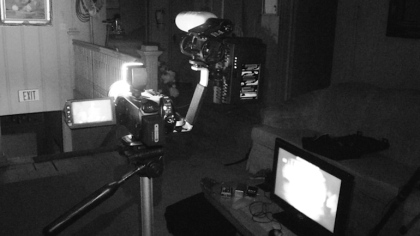 If your mother is anything like my late mom was, the idea of a Mother’s Day Ghost Tour of notorious (alleged) Fort Worth hauntings would not only sound plausible, but actually preferable to more traditional, fancy-brunch-in-a-corsage holiday celebrations. The current Dead End Ghost Tour is one of several guided walking treks of the spirit-plagued Fort Worth Stockyards that local history buffs have conducted over the years. Debbie Rhame, innkeeper of the popular (and reputedly spooked)  Stonehouse Bed & Breakfast, will conduct regular editions of her Dead End strolls at 8 and 9pm this Sun May 11. The starting point is right outside the Whiskey Girl Saloon, 2413 Ellis Ave. Tix are $20 per person, though group rates can be negotiated.

Rhame, an amateur historian and paranormal enthusiast who also lives at the Stonehouse, is exactly what you’d want a haunted tour guide to be –– a knowledgeable, garrulous eccentric. She’ll bring her iPad stocked with photos and notes about some of the homicides, suicides, and mysterious unexplained deaths that’ve occurred at key buildings in the Stockyards. While she doesn’t revel in seediness and vulgarity just for shock’s sake, Rhame isn’t afraid to relate some of the macabre and unattractive aspects of Fort Worth frontier life, from nighttime KKK rampages to Stockyards’ chippies dealing with unwanted pregnancies in tragic ways. Her tours mix confirmed historical facts with long-time rumors and gossip, i.e. they sound like a lot of fun.