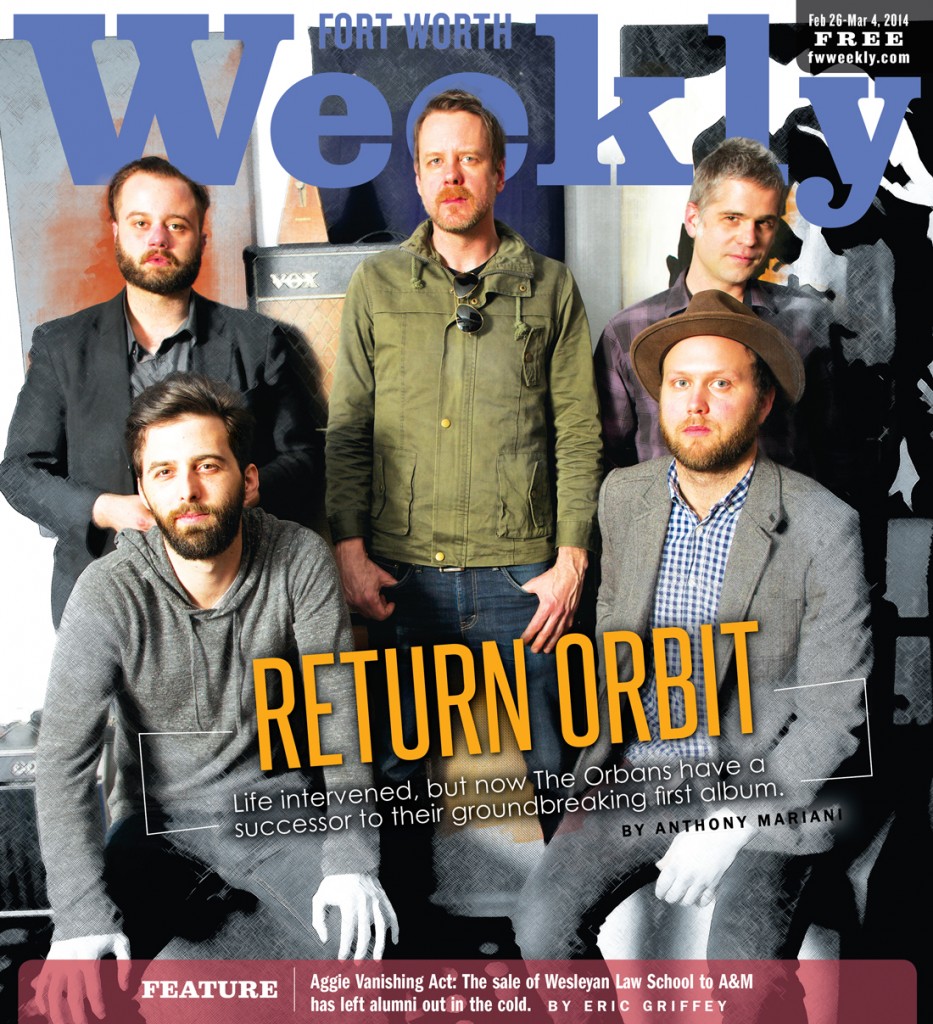 Before we get to the touring acts, a word about the Fort.

1.) The Near Southside is the place to be tonight (Friday). At 7 p.m. at Magnolia Green Park (1100 Lipscomb St.), Dallas/Fort Worth indie-rockers The Orbans will headline another iteration of Friday on the Green, a free monthly outdoor concert series brought to you by Fort Worth South Inc. and, among others, your friends here at the Weekly. Admission, as always, is free, and while lawn chairs and blankets (and pets) are welcome, coolers are not –– there’ll be cold, frosty beverages and food-truck fare for sale on the premises. Fort Worth singer-songwriter Jacob Furr and the hootin’ and a-hollerin’ Walker & The Texas Dangers will open.

That The Orbans are not a household name is just another reason why this music biz is crackers. Frontman Peter Black, guitarist Kenny Wayne, and the rest of the guys consistently produce some of the most perfect indie-pop imaginable: killer hooks, melodic riffs, and rocking rhythms. Though the band’s new album, Vedere, is spectacular, I can’t find any videos of any songs off it online, so here’s a number off When We Were Wild, The Orbans’ 2010 debut.

Once things wind down, mosey on over to The Where House (2510 Hemphill St., 817-913-7777), where a handful of badass underground Fort Worth acts –– Spacebeach, Doom Ghost, Jack Thunder & The Road Soda, and Tidals –– will perform as part of a benefit for Matt Vickers. Co-founder of Dallas Distortion Music, a concert promotions company and record label, the Fort Worthian was in a bad car accident a few weeks ago and has only recently regained consciousness from a medically induced coma. “Matt is coming along miraculously well, considering his initial prognosis,” said cousin Ryan Jernigan. “He is awake, aware, and talking. He is by all [indications] Matt.”

Physical rehabilitation, Jernigan said, will be “long and challenging.”

“Definitely tens of thousands [of dollars] and probably over 100,000 once rehab is done,” Jernigan said.

2.) Texas talent will be on full display Saturday at Main Street Garden Park (1900 Main St.) in Dallas. Along with the Fort Worth-bred Toadies, Homegrown Fest also features Austin’s … And You Will Know Us By the Trail of Dead, Houston’s Wild Moccasins and The Suffers, and Austin’s The Black and White Years. Of course there’ll be some closer-to-home acts, including Fort Worth/Dallas’ Calhoun and The Phuss; Fort Worth/L.A.’s Son of Stan (see: below); Dallas/L.A.’s Mystery Skulls; Denton’s Sarah Jaffe, The Baptist Generals, and Seryn; and Dallas’ Goodnight Ned and Sam Lao. Gates open at 11 a.m., and tickets are $20.

3.) You might-could call Deadhorse “Houston’s answer to Pantera.” Loud and thrashy, the Bayou City quartet was not nearly as huge as Arlington’s favorite sons but did experience some mainstream success, putting out a couple of major-label albums in the early ’90s. The band broke up years ago but recently got back together and is about to work on a new album. Deadhorse swings into North Texas this weekend, playing tonight at The Rail Club (3101 Joyce Dr., 817-560-RAIL) with Interment, Violence Arise, and Driver Eleven and Saturday at Three Links (2704 Elm St., Dallas) with Protest, Sonsofbitches, and Exploder.

4.) Mixing bluegrass, Western swing, and countrified rock, Boxcar Bandits are a North Texas treasure, one of only a handful of artists here devoted to that beautiful sound. These Denton cats have been spreading the old-timey gospel since forming in 2006, playing throughout the South and Texas, including at Dan’s Silverleaf, where they play every Monday and, incidentally, where their last album was recorded, the crazily titled Live at Dan’s Silverleaf (the follow-up to their 2008 debut, Smells like Grass). Catch Boxcar Bandits tonight at Fred’s Texas Café (915 Currie St., 817-332-0083).

5.) One of the baddest-ass bands in the world, Australia’s Wolfmother, comes to House of Blues (2200 N. Lamar St., 214-928-BLUE) on Sunday. Pounding out a hyper-kinetic brand of psychedelic fuzz-age, Wolfmother is the best of underground ’60s rock and today. Frontman Andrew Stockdale’s guitar solos are stringy and full of finger-vibrato in a Jorma-Kaukonen way, and the rhythms and riffs are sludgy and monstrous like those of The Sword or, closer to home, Stone Machine Electric. Don’t miss this one.