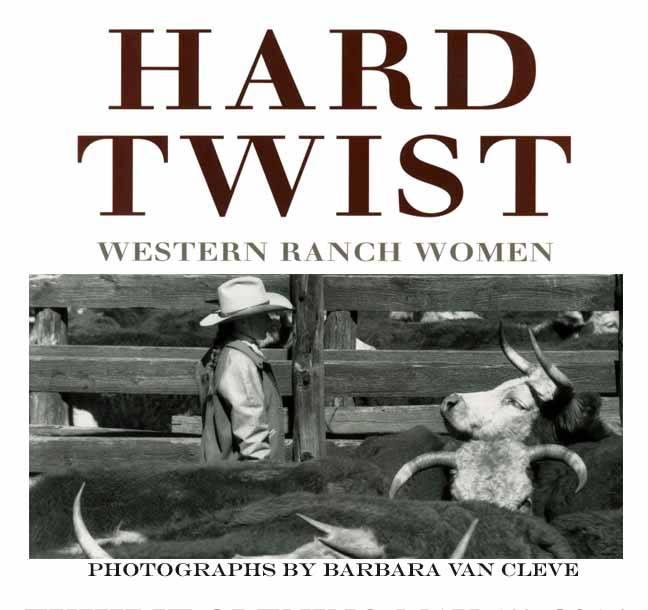 For folks who managed to grow up in cowboy country without learning a thing about ranch life, a hard twist refers to the old-time Manila hemp lariat rope that is tightly twisted or hard twisted. It can also be used to describe a small, physically strong person who very rarely breaks –– much like the Western women in the National Cowgirl Museum and Hall of Fame’s new summer exhibit.

Inspired by the apparent lack of images of ranching women, Van Cleve, who grew up in Montana on a ranch that dates back 134 years, spent most of 1986 through 1994 traveling the Rocky Mountain West on horseback, photographing and interviewing women on the range, on their ranches, and at rodeos. In 1995, the fruits of her labor were published in a book of the same name.

Images of women performing routine ranching duties, such as feeding animals or branding cattle, are juxtaposed with photos of often the same women in domestic roles, making dinner or even breastfeeding.

In “Double Duty,” a woman dressed in a full ranch getup, including chaps and a cowboy hat, also sports an oven mitt –– she’s checking on the brisket in the oven. In the audio tour, Van Cleve says this photograph epitomizes her notion of ranch women, who work outside and inside.

The exhibit consists mostly of candid shots but also portraits. One of the latter, of Melody Harding, who Van Cleve describes as one of her major inspirations for Hard Twist, shows a petite blonde woman with piercing blue eyes standing with her saddle in hand, the huge apparatus emphasizing her small figure as well as her obvious toughness. In another portrait, “Jan on a Bareback Bronc,” Van Cleve achieves a captivating slow-motion shot of a rodeo world champion in action, on a horse, Van Cleve says, that any man would be proud to ride. The blurriness gives a real sense of being right in the middle of the action.

Hanging next to the photograph is the red, white, and black rodeo shirt that Jan was wearing when she broke her neck competing. It was cut across the chest and later patched up by her sister –– Jan never competed in new clothes. She believed that if she got hurt in something and survived, it became a token of good luck.

Though black and white and occasionally dark and muddy, Van Cleve’s images are made vibrant by all of the life that they show. Hard Twist reveals the beauty behind a lifestyle often seen as rugged and dirty and also highlights women’s value in the male-dominated ranching world.