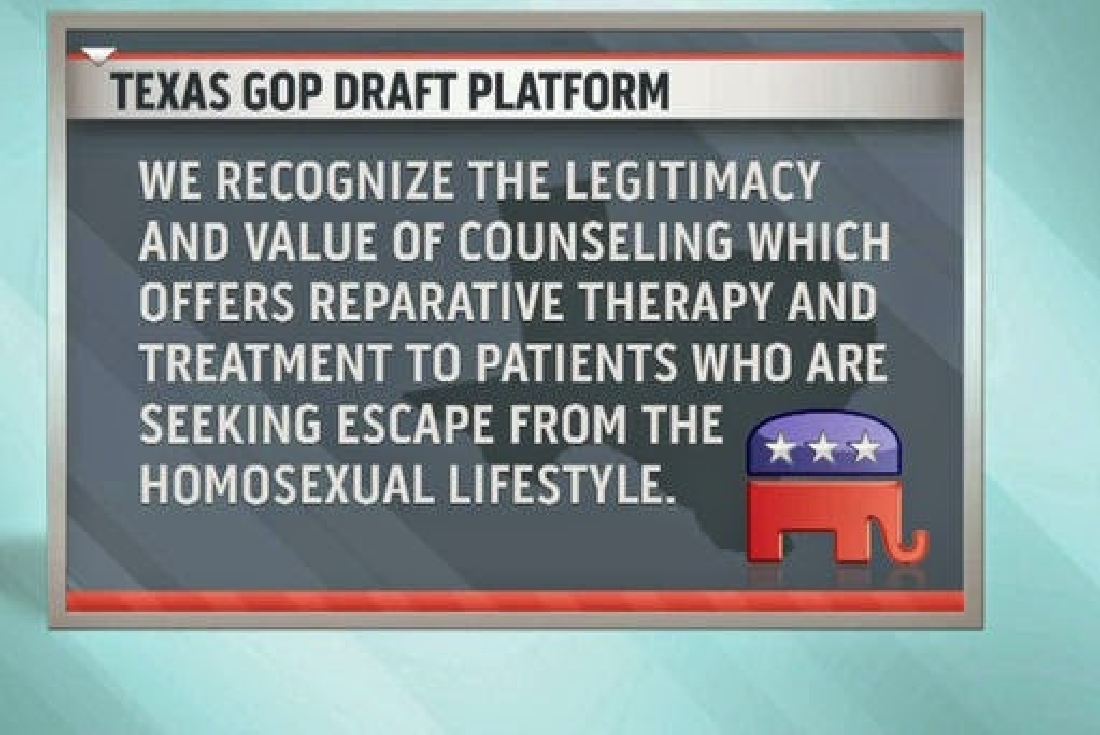 Want an e-mail box filled with hate letters and calls at all hours of the night? Then suggest to the GOP that their platform should include reparative therapy, a technique of counseling people to no longer identify themselves as gay.

Cathie Adams is president of the Texas Eagle Forum, a pro-family political movement linked to the Tea Party. She promoted reparative therapy at the recent Texas GOP convention in Fort Worth and has been besieged ever since. “I received a multitude of hateful and pornographic e-mails, curse words, calling me names that are not mentionable, very ugly,” she said. “To agree and disagree is part of the process, but we shouldn’t make it a personal attack.”

Adams says she pitched the controversial therapy after a friend told her he had benefited from it. Meanwhile, California and New Jersey have recently outlawed it. “All we’re trying to say is … let’s keep it an open and free choice for those who want to go,” she said. If it’s voluntary, “then why would anyone want to outlaw it?”

The many critics of the new GOP platform — which has put Texas’ um, uniqueness in the national news yet again — point out that the American Psychological Association and pretty much every other nonpolitical mental health group have decried the practice and don’t consider homosexuality a mental disorder or anything that needs repairing. Even the pioneer of the modern form of the practice, the Rev. Kent Philpott, denounced the practice (and came to terms with his own homosexuality).

Then again, the GOP has never been big on science that threatens their beliefs.

Suspicious? Static? Nah. But some things make the hair on the back of your neck stand up. Like the line in a June 2 story from Reuters news service noting that TransCanada had shut down the Keystone Gulf Coast pipeline, which runs from Cushing, Okla., to Port Arthur, for maintenance. It was supposed to reopen June 3.

When word finally spread several days later, pipeline opponents were also suspicious, especially since the pipeline is only a few months old, and TransCanada won’t elaborate. “What we want to know is what kind of maintenance was done? Why? Where?” said Julia Trigg Crawford, part of whose family farm was taken by the giant company through eminent domain for pipeline right-of-way.

The shutdown was still in force on June 10, a week longer than it was supposed to last, according to Reuters.

“For TransCanada to shut down its entire line so soon after start-up is a huge red flag,” said Vicki Baggett, a safety advocate with the grassroots organization NacStop.

The maintenance may be routine, but shutting down a major pipeline for a week, after less than six months of operation, isn’t. There is no sign of a spill as yet, but so many sections of the pipe had to be redone — because of faulty welds, cracks, bad pipes — that people living along it  are worried.

“We were out there when TransCanada tried to fix the problems with the pipe,” said Kathy DaSilva, an organizer with Tar Sands Blockade. “But they were not addressed adequately. They put a Band-aid on the problems but didn’t solve the underlying conditions. It’s incumbent on the [federal] Pipeline and Hazardous Materials Safety Administration” to keep the line shut down “until a third party has thoroughly inspected it,” she said.