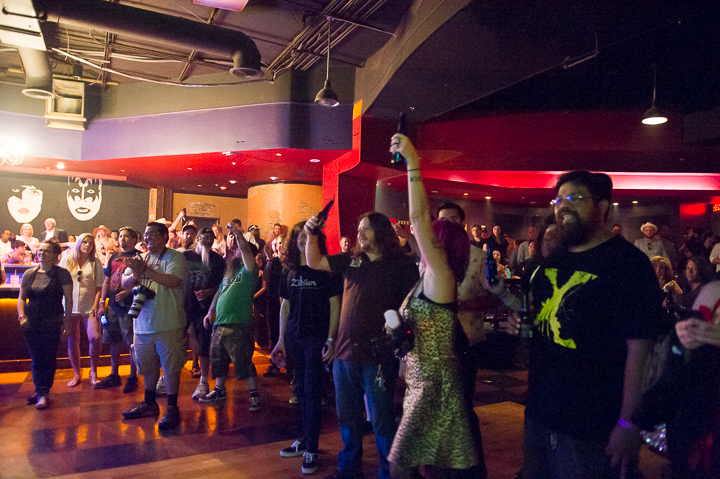 It all starts with a ballot. Well, actually, it all starts with listening to a lot of local music, but let’s say that’s implied. To compile the ballot every year, I solicit write-in votes from a gaggle of local movers-and-shakers: venue owners, talent buyers, my writers, other North Texas writers, veteran musicians, and others. I tally their votes, add a few of my own, and –– viola! –– we have ballot.

The next step is where it gets a little tricky. I’ve got to book at least 10 nominees at Eagle Audio Recording to lay down live tracks for our annual charity compilation CD and 48 nominees for our annual Music Awards Festival. Confirming the lineups requires only a pencil, a chart, a sextant, a telescope, a crystal ball, and lots of caffeine and alcohol.

The whole time, my writers and I are also working on the issue in which we break down all of the nominees. On the sales side, associate publisher Michael Newquist, marketing manager Dana Crumbliss, and their in-house crew are rounding up sponsors. In the production department, manager Scott Latham and art director Bonnie Mays are lining up images and laying out the issue and the handy-dandy pocket guide. (Thanks to photog Vishal Malhotra for his great snaps and to Corporate Image on Brentwood Stair, Eagle Audio Recording on the Near Southside, and Miss Molly’s Hotel in the Stockyards for allowing him to shoot some pics on location. Thanks also to Fort Worth artist Cody Soape for the dynamic, colorful cover art.)

Lastly, business/tech guru Bob Niehoff and his people, in-house and freelance (especially beloved sound guy Dre Edmonson), are making sure all of the technical details are in place for the festival. Taking place two weeks ago at eight venues in the West 7th Street corridor, this year’s throwdown was amazing, probably our best yet, which is really saying something, because we’ve been at this thing for 12 years. Though any sort of accurate head count is impossible, we can do some rough math: If we assume (and we can safely) that from about 7 p.m. ’til 9 p.m. each venue drew about 100 people, then that gives us about 800 folks. Multiple that by three, and you’ve got about 2,400 people, not even counting the crowds for the 4-to-6 p.m. shows.

The fantastic turnout is a testament to the loyalty of our readers. Other than in these pages, where we may have mentioned the festival once or twice in the preceding weeks (har har), the only other places you might have seen a preview of MAF’14 were DFW.com (thanks to theater critic Mark Lowry) and Central Track (thanks, Cory Graves). That’s it. The bulk of the publicity came from us and, via social media, most of the participating bands.

This year’s ballot was “liked” on Facebook nearly 8,000 times and tweeted nearly 400 times, and we received nearly 60,000 votes total, the online tallies, according to Google Analytics, coming from as far afield as New York City and London. Which just goes to show: There’s more to Fort Worth music than just Fort Worth.

The numbers may be impressive, but as I said at the Music Awards ceremony Sunday at Queen City Music Hall, the awards –– we call them the Panthys a la the Gammys –– are just for fun. Honestly, they’re nothing more than a very laborious yet very fun excuse to gather a bunch of local musicians together and par-tay. And par-tay we did. Nearly 600 people, all nominees and their plus-ones, piled into the downtown venue for some free Bud Light product (including –– gulp! –– Bud Light Platinum), some free Tex-Mex from Yucatan Taco Stand, and, for a select few, the Panthys. (The trophies themselves are little growling panther heads in honor of one of Fort Worth’s most popular nicknames, Panther City.)

The biggest winner was Holy Moly. The five punk-influenced country boys swept every category they were nominated in, including Artist of the Year, beating out the night’s second biggest winner, Quaker City Night Hawks, who took home every other category they were nominated in, including Best Band. A few Panthys went to other familiar faces: the Rock category again to The Hanna Barbarians, Heavy Metal to Southern Train Gypsy, Singer-Songwriter to Scott Copeland, Cover Act to Big Mike Richardson, Venue to Lola’s Saloon, and Rap to Rivercrest Yacht Club. The RYC’s victory sent a couple-a supposed hip-hop fans to social media afterward to dismiss the Yacht Club as a mere “comedy act” and argue on behalf of Fort Worth’s allegedly more serious, allegedly more active rappers. Neither seriousness nor diligence automatically equals high quality, but the fact that the RYC won this category for the sixth time in nearly as many years points up an important aspect of the Music Awards, one that bears repeating –– again. They’re. Just. For. Fun.

Probably the most interesting category every year is New Artist, considering there rarely is a clear frontrunner. This year’s winners, The Royal Savages, were among several other first-time Panthy recipients: Green Audio Productions’ Ben Napier for Producer, Leon Bridges for Blues/Soul, and Un Chien for Indie-Rock Album of the Year (Un Chien).

As part of Sunday’s shenanigans, we welcomed four more folks into our Fort Worth Music Hall of Fame, a virtual pantheon that counts among its inductees Vaden Todd Lewis, Ronald Shannon Jackson, Stephen Bruton, Robert Ealey, Delbert McClinton, and dozens more. Congratulations to our 2014 class: former Moon owner Chris Maunder, former Basement Bar owner Todd Osborne, and Pam and Billy Minick of Billy Bob’s Texas. During his acceptance speech, Billy promised to incorporate local rock ’n’ roll into the regular programming at The World’s Largest Honkytonk, generating easily the biggest ovation of the night. We can’t wait to see what happens with that.

Thanks again to all of our other sponsors –– North Texas Chevy Dealers, Number Juan Tequila, The T, Forty Creek Whisky, and The Art Institute of Fort Worth, Uber –– and also to Rush Olson Creative and Sports for the superb promotional videos, Weekly editor Gayle Reaves, proofreader Margaret Allyson, publisher Lee Newquist, and, last but not least, interns Kenney Kost and Melissa Wylie.

I’d also like to thank you, the most awesome, most active, clearly best-looking Fort Worth music supporters on Earth. Until next year …