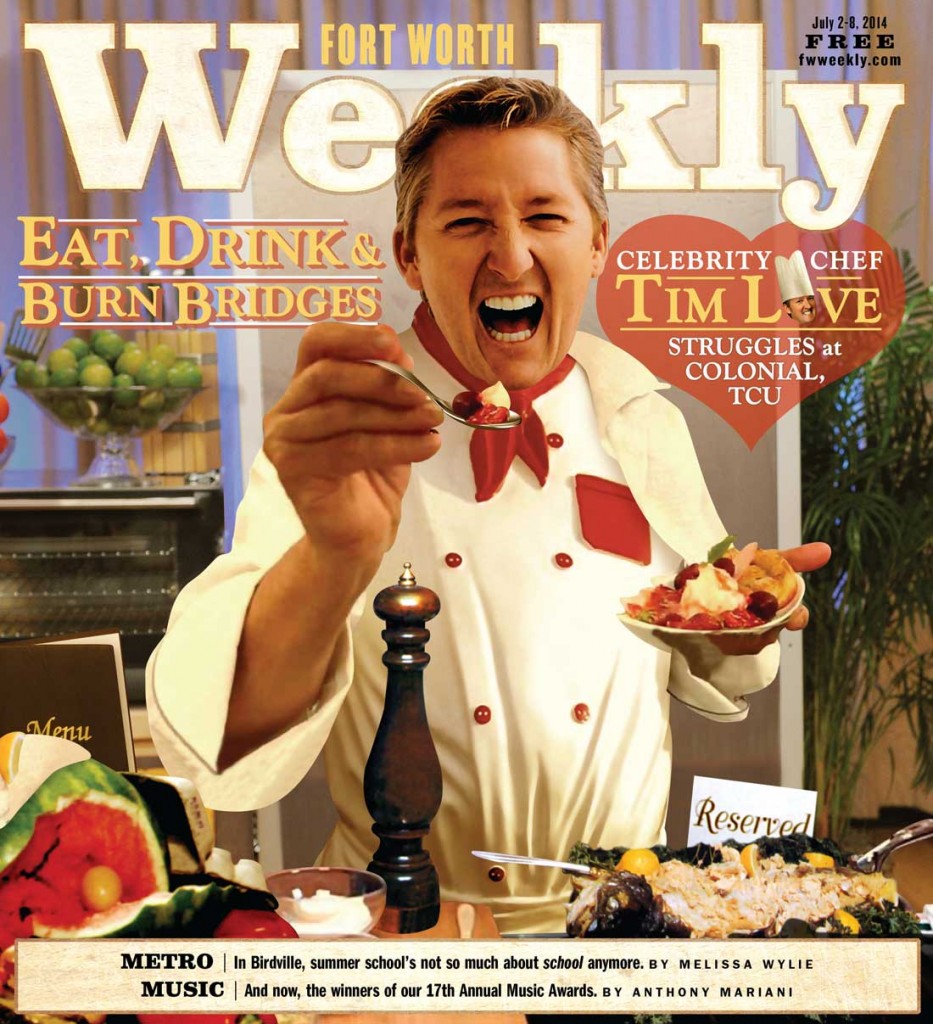 Last week’s cover story on chef Tim Love (“Eat, Drink & Burn Bridges,” July 2, 2014) received national attention in Esquire’s digital edition, much to Love’s chagrin. Fort Worth’s most marketed celebrity chef doesn’t mind dishing out verbal spankings, but he isn’t inclined to take any paddlings, and he sure got one. Esquire is a men’s lifestyle magazine that bills itself as the guide for “men who want to live a fuller, richer, more informed and rewarding life.”

Esquire Editor at Large Josh Ozersky penned the article “Which Celebrity Chef Douchebag Are You?” and displayed the Weekly cover featuring Love. Static would not cherish being stranded on an island with Love (or stranded in an elevator with him for two minutes) but even this snarky columnist would never call him a d-bag in a headline. We might be an alt-weekly rag, but we still have class.

Coincidentally, the New York Observer featured Boston celeb-chef Todd English in an article at the same time the Weekly profiled Love. Ozersky read both stories to determine which chef he’d rather be.

He begins by describing a well-known occupational hazard among celeb-chefs –– they turn into egomaniacal divas, a condition described as “chronic and progressive.” Ozersky says Love and English are each afflicted, as both are “audacious and cocksure.” He describes English as a “devilishly handsome” serial skirt-chaser known more for carousing than his “mediocre restaurants.” However, Ozersky says if he were going to be a haughty chef, he’d still rather be like English than Love.

English might radiate “smarminess” but at least he wears it like a badge of honor. Love, on the other hand, according to Ozersky, is thin-skinned and “less self-aware,” his New York restaurant bombed deservedly because “it was as bad as everybody said,” he stole his Love Shack concept from the Manhattan-based Shake Shack, and he “borrowed” his wood-grill concept for Woodshed Smokehouse from Dallas chef Tim Byres.

In Ozersky’s eyes, it’s better to revel in being contemptibly obnoxious than to be unaware of it.

“Love, for all his hucksterism, has never truly embraced his destiny, and continues to be wounded by the slights thrown his way by public and press; whereas English, depraved and dissolute, a shameless rogue and reprobate, is a hero to the meek and the conflicted,” Ozersky concludes. “Say what you will about Todd English; but for all his douchebaggery, he is a man who has come to know himself. And no man who completely owns his vices can ever be truly defeated.”