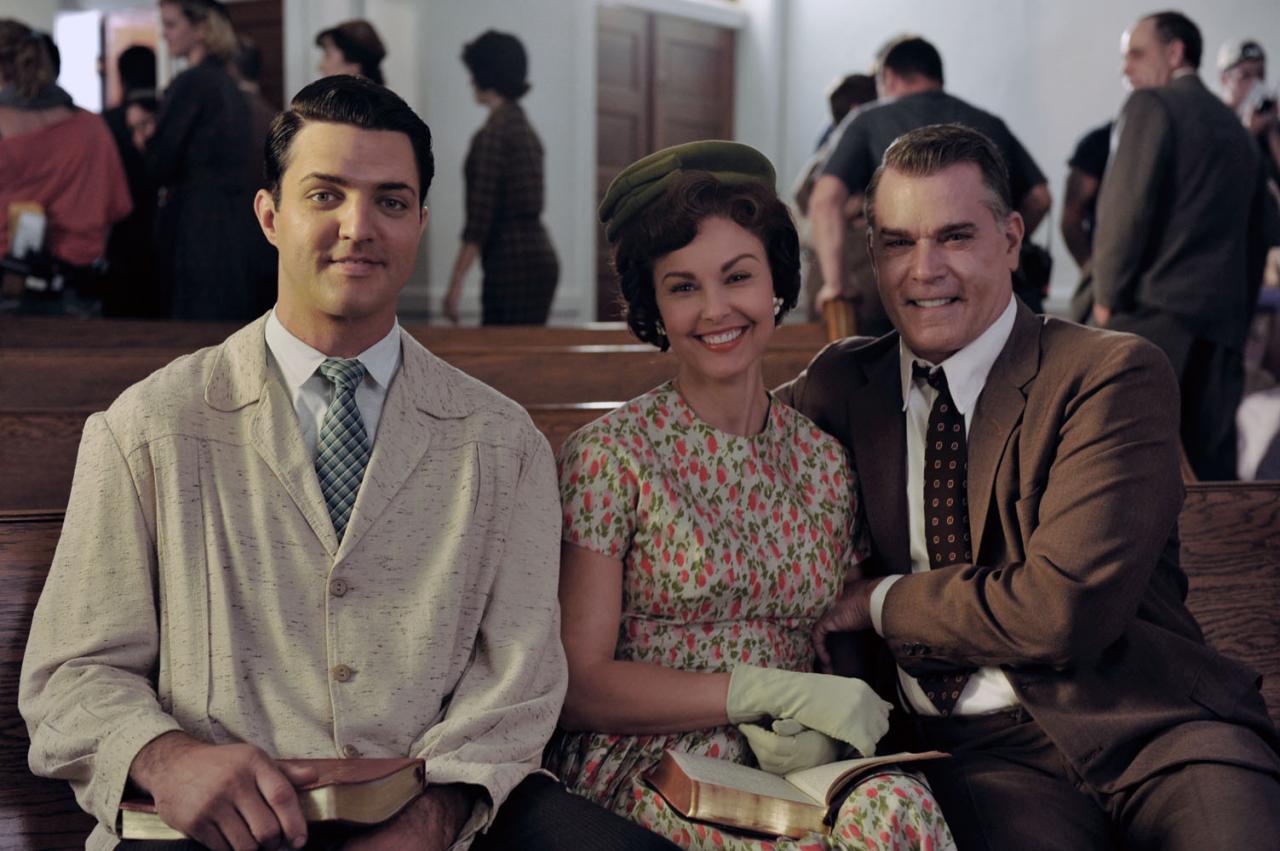 What if Elvis’ twin brother had lived? The makers of The Identical aren’t the first to ask that question, but they are the first to build a movie around the idea that a 1950s rock star had a long-lost twin who watched from afar all the good and bad things fame did to his brother. What’s more, they’re smart enough to make their movie about a fictitious rock star instead of tying their story down to the particulars of Elvis Presley’s life. This is a terrific premise for a movie. Too bad they do so little with it.

The movie picks up in 1935 when identical twin boys are born to a Mississippi couple (Brian Geraghty and Amanda Crew) who can’t afford to feed two additional mouths. They decide to give one baby up to the Rev. Reece Wade (Ray Liotta), a traveling preacher from Tennessee whose wife (Ashley Judd) can’t have children. The story then follows Ryan Wade (Blake Rayne), whose adoptive parents never tell him about the circumstances of his birth. He wants badly to make music but finds his path blocked by both his dad, who wants Ryan to follow his footsteps into the ministry, and his twin, Drexel “The Dream” Hemsley (also Rayne), who becomes a world-famous musical start.

So many Christian films about music have the same contemporary look; in fact, screenwriter Howard Klausner wrote one of those, 2010’s The Grace Card. This one switches up visual strategies to fit the period, showing the scenes with the twins’ parents in black-and-white, Ryan’s childhood in sepia, and the 1950s sequences with the saturated look of the Technicolor musicals being made during that time. In addition to the production values re-creating the period, this movie also has quite a bit of talent in the cast, including Joe Pantoliano doing a funny turn as a Jewish auto mechanic who puts on a fake Southern accent for his customers. The story niftily has Ryan make a living for a while as a Drexel impersonator, briefly coming face-to-face with his twin only when Drexel declares Ryan the winner of an impersonation contest.

The religious content doesn’t drag the movie down. What does that job is the slavish way it follows the conventions of music biopics. Ryan’s romance with a hospital nurse (Erin Cottrell) is wearisomely predictable and wholesome, as is the eventual revelation of Ryan’s relationship to Drexel. The movie overdoses on voiceover narration, too. Rayne — a Nashville singer-songwriter making his acting debut — is game but overstretched in a demanding lead role, and Mark Harchol’s forgettable rockabilly songs don’t convince us that either Drexel or Ryan are musical geniuses. All in all, too much of The Identical just plays like Walk Hard: The Dewey Cox Story. I’m sure that’s not the movie the filmmakers wanted to recall.