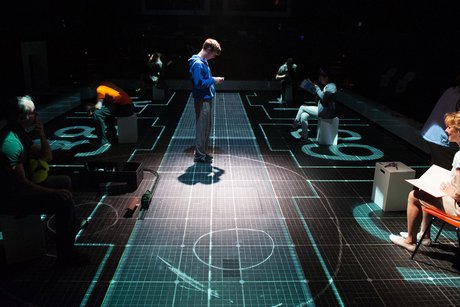 Right now we’re in that frustrating transitional phase from summer to fall that Texans know all too well: It’s still hot and humid, but Labor Day is over and the official start of autumn is less than three weeks away. It’s time to hibernate in the cool indoors and wait for the temps to drop. Theater and film fans will get the chance to go deep indoors –– in this case, the mind of a teenager with an autism-like condition –– with today’s (Wed Sept 3) 2 & 7pm screenings of The Curious Incident of the Dog in the Nighttime at The Modern (3200 Darnell St, FW). Tix are $12-$20.

Co-presented in Fort Worth by Amphibian Stage Productions, Curious Incident was, of course, a huge bestselling novel before it became an equally blockbuster, effects-filled stage play that took London’s West End by storm in 2013. Today’s screening is actually a rebroadcast of the National Theatre Live taping direct from the London theater district. The play, like the book, concerns a mathematically precocious adolescent with “behavior problems” who investigates the brutal killing of a neighbor’s dog. His hunt for clues leads to a series of dangerous discoveries about his own family. The less you know the better, so head to The Modern (and its fantastic a.c. system) to involve yourself in the mystery.