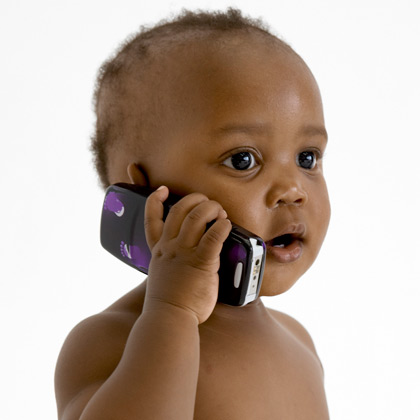 A University of North Texas doctoral student noted something interesting in the way parents are interacting with their children. More properly stated, over several days at several venues, Cory Kildare observed how parents appear to be ignoring their sweet babies in favor of multi-tasking on smart phones. Like any good educational psychologist, she proposed to turn these observations into her doctoral dissertation. For Kildare’s study, “Infants’ Perceptions of Mothers’ Phone Use,” she is recruiting 50 moms with infants 3- to 6-months old to participate.

A plethora of data exist on how children’s use of technology affects their growing brains. And if you wander anyplace there are parents with children, you’re going to notice a lot of us handing our cell phones to our progeny, in an attempt to occupy their time. Or keep them pacified, as the case may be. Because apparently some of us believe that kids are incapable of waiting in line for 15 minutes, or taking a trip in the car, without having something electronic in front of them. I don’t judge –– my teenager currently sits in the next room, reading a story on a Kindle and texting on her cell phone.

However, this electronic pacification occurs so often that the American Academy of Pediatrics came out with recommendations that children under age 2 not be allowed screen time at all, because, as their report states,  “a child’s brain develops rapidly during these first years, and young children learn best by interacting with people, not screens.”

There are also studies on the damage that video games and smart phones can do to kids’ brains. The flashy lights on video game applications may trigger seizures in kids with seizure disorders, and the interaction with smart phones may harm children’s short term memories. The visual stimulation of electronics right before bed can jack with both child and adult sleep cycles. Not to mention that all the texting is creating a legion of youth at risk for carpal tunnel syndrome. Older children’s time on television, computers, and smart phones should be limited to two hours daily, according to the AAP.

But there’s not a lot of research on how children are affected by their parents’ inattention. One study from earlier this year took a small sample of families in a fast-food restaurant and observed how much time the adults interacted with their children. Almost all of the parents took out their cell phones at least once during the meal. A small number of parents were on their phones for the whole meal, and a couple of those parents didn’t notice when their children left the table. That’s right –– they were so distracted by their gadget they didn’t see the kid leaving.

I’ll be honest: There’s not a meal I eat out where I don’t ignore my family while I check my e-mail.  You might actually have seen us –– my husband, my kid, and me, all on our cell phones while we wait for the check.

We can probably all agree that those parents who are so distracted that they don’t notice their child wandering out of a restaurant, or dangerously close to a ledge or an escalator, should put down their freaking phones and watch their children! But how much distraction is harmful? That seems to be the question that Kildare is aiming to answer.

Kildare said she struggled with the notion of using only mother-infant pairs, as opposed to opening the study to fathers of infants.

“It’s a small sample size,” Kildare said. “I decided to use moms because they’re more likely to be the caregivers, and most of the research looking at attachment uses mothers-baby pairs.”

Recruitment for participation in Kildare’s study runs October through March. In addition to the feel-goodness of participating in what might be ground-breaking research, reimbursement will include entry in a drawing for one of four $25 gift cards. The study is expected to take about 90 minutes –– unless, of course, mom has to answer some urgent e-mails. For more information, e-mail parentsandphones@gmail.com.