I was lucky enough to see The Innocents when I was a teenager, and it turned me off horror flicks with faceless slashers running after naked teens for good. This Halloween sees this 1961 British classic out on a handsome new Blu-Ray transfer from the Criterion Collection, and for a movie that has suffered from poor video transfers in the past, it’s a great development.

The story is based on the plot of Henry James’ novella The Turn of the Screw, adapted impeccably by the American novelist Truman Capote. Deborah Kerr plays a 19th-century governess (nameless in the book but named Miss Giddens here) who goes to a wealthy bachelor’s country estate to take care of his nephew and niece. That’s when she starts to see the ghosts of Miss Jessel, the previous governess, and Peter Quint, the groundskeeper. Are the ghosts real, or are they figments of her imagination?

As Maitland McDonagh notes in her excellent essay accompanying the disc, Kerr was approaching 40 when she played this role, which typically is played by much younger actresses. Still, she was well used to playing virginal naïfs, and she does well to play this one as a fevered and mentally unstable. (American audiences remember her best for the role she played eight years earlier, the adulterous Army wife in From Here to Eternity, a vibrantly sexual part that she regrettably never followed up on.) Much of this movie’s terror comes just from her performance as a woman who comes to see protecting the children as a sacred duty, even if it means destroying them and herself.

Then again, director Jack Clayton and cinematographer Freddie Francis do much to make this black-and-white movie a spectral experience, fuzzing out the focus at the corners of the frame and rendering the ghosts as terrifying presences, even though they don’t actually do very much. This is the quality that was frequently lost when the film was transferred to VHS. The classical look of The Innocents has been widely imitated to great effect (Alejandro Amenábar’s 2001 The Others) and much poorer effect (James Watkins’ The Woman in Black). Peter Wyngarde is unforgettable as Quint, but it’s Clytie Jessop’s Miss Jessel who makes the scarier appearances in broad daylight in a classroom and across a river, oblivious to the rain falling on her and glaring at the governess. 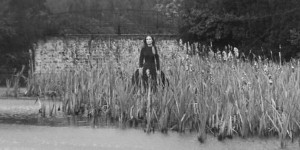 For a neat modern reference, check out this image from A Girl Walks Home Alone at Night, an upcoming Iranian vampire Western that I’m on fire to see. The traditional chador is used like the black Victorian dress. 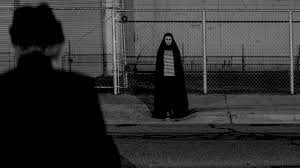 It’s interesting to compare The Innocents to Benjamin Britten’s opera version of The Turn of the Screw, composed seven years prior. McDonagh is correct to identify the movie’s Quint as a heterosexual presence who threatens the governess with his masculinity, but the homosexual Britten cast Quint as a pedophile who maintains a hold over the children even after his death because he molested the boy, and possibly the girl as well. Of course, the mores of the 1950s prevented Britten from saying this straight out, but most productions of the opera make it pretty clear. I highly recommend the opera, by the way.

I haven’t even mentioned the performance of Martin Stephens as the boy, Miles. He’s almost like a parody of the stiff and proper English schoolboy, but he has a demonic streak that surfaces from time to time, notably when he kisses the governess on the lips. This is one of the creepiest kids in the history of cinema, and he makes you wonder whether the evil in the house isn’t radiating from him rather than from any ghost. Stephens quit acting when he hit puberty and wound up pursuing a successful career as an architect, though he maintains a website devoted to his movie roles, which include a similarly unsettling performance in Village of the Damned. It’s hard to imagine what his career as an adult actor might have looked like. Would he have gone on to play a greater range of roles, or would he have kept on playing polite, courteous, unspeakably evil men? In any event, it would have been hard for him to top this performance here.

Anyway, the psychological complexity, the visual beauty, and the sheer terror of the climactic sequence make this into one of filmdom’s great ghost stories. The British associate The Turn of the Screw with Christmas, since the book’s framing story is set during that time of year. However, I can’t think of a better movie than The Innocents to see on Halloween and haunt your nightmares well into the next year.