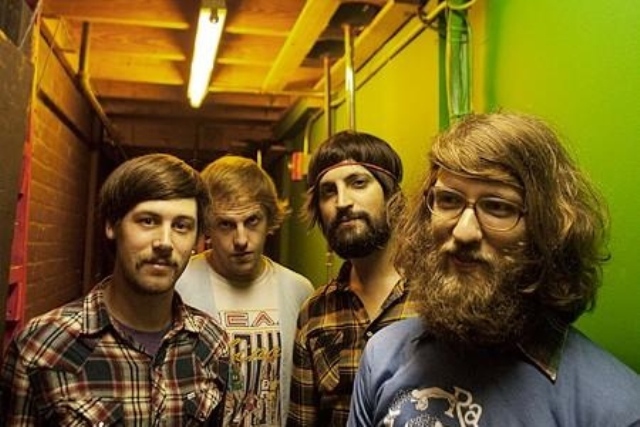 On the local end is Cleanup, whose grand, sprawling math-rock, full of bubbly tapped-and-pulled guitar notes, deep grooves, and sumptuous harmonies, will provide a heavy, semi-bombastic counterpoint to the touring act. Equally steeped in mathy melodies, Chicago’s Maps & Atlases is a little softer and a little poppier though no less progressive, their polyrhythmic beats, lots of clickity-clacking rimshots, jittery skips, and rumbling percolations and stomps, and twinkling guitarwork summoning a strange brew of Afrobeat and maybe even a little flamenco mixed with traditional electric folk, the point driven home by frontman Dave Davison’s syrupy but cranky Dave Matthews-esque voice. Like Cleanup, the material is terrifically challenging but only subtly ­­– neither band sacrifices substance for sizzle.

Brooding Fort Worth synth-popsters Ice Eater will open the show. Admission is $10-15.

2.) Here’s another study in complementary musicality. Joining the darkly operatic Fort Worth duo Pinkish Black on Friday night at The Chat Room Pub (1263 W. Magnolia Ave., Near Southside, 817-922-8319) will be Curse. Where Pinkish Black is loud and heavy, the Baltimore twosome is, well, still loud, but instead of rumbling, thunderous drums and synthetic waves of molten lava there’s a trebly, brassy punk clang.

The Dallas-based rock-influenced jazz trio Unconscious Collective will open the show. Admission is $5.

Which, of course, isn’t a bad thing, even though I’ve always thought that the former Flickerstick and current Jetta in the Ghost Tree frontman’s voice was singular. Anyway, though Lea and Nick Urata share a Broadway belt –– and a penchant for writing superbly melodic songs –– DeVotchKa combines contemporary pop sensibilities with lush, Russian folk-influenced musics. The Denver band is in the midst of a tour that will stop in Dallas tonight (Thursday) at Gas Monkey Bar N Grill (10261 Technology Blvd. E, 214-350-1904) with Dallas’ Fox and the Bird. Admission is $22-200.

4.) Saturday’s show at The Live Oak Music Hall & Lounge (1311 Lipscomb St., Near Southside, 817-926-0986) will be the last one for Calhoun for a while. The Fort Worth/Dallas/Baton Rogue/San Francisco guys are working on another record, the follow-up to the delicious 2013 EP Paperweights.

5B.) In memoriam of the North Texas trumpeter Leonard Belota, who passed away recently after battling several illnesses, a bunch of local jazzbos, including the TCC Monday Night Band, will gather from 2 to 5 p.m. Sunday to perform at Arts Fifth Avenue (1628 5th Ave., Near Southside, 817-923-9500). Admission is free.

Remember the shows above in addition to what’s going on at The Where House (2510 Hemhill St., Near Southside) on Friday, a big ol’ Halloween party starring Fort Worth hard-rockers Vicious Firs, Dallas punks Sealion, and Son of Stan, whose new recording, the EP Georgia, is quite a treat, and on Saturday Fort Worth alt-Americana rockers Siberian Traps and psychedelic country boys Igneous Grimm at the new River Run Roadhouse (937 Woodward St., near downtown).