In early 2012, Ryan Coplen and Hank Tosh of the Fort Worth surf-rock quartet The Ape Hangars decided it was time to record their debut album. They knew they wanted to work with producer Jennifer Rux, co-founder with husband Robby Rux of Dreamy Soundz. The Near Southside analog recording studio and vinyl/cassette-tape label has been a force since 2011, pumping out acclaimed platters and tapes by the likes of War Party, Bitch Bricks, The Fibs, Year of the Bear, Fou, and Skeleton Coast. Turns out, Jennifer counts among her various influences an early-’90s psychedelic outfit called Terrapin, which Tosh co-founded.

“That was a funny coincidence,” Coplen said.

Of course Jennifer said yes when Coplen and Tosh approached her with their project, and Dreamy Soundz will release The Ape Hangars digitally and on vinyl in late January or early February via the Dreamy Soundz label. Beside bassist Coplen and drummer Tosh, who have been jamming together since their late teens, perhaps most notably in the early-’90s outfits Duck Duck Annihilation and Feast of Snakes, The Ape Hangars include keyboardist Ben Fleming and lead guitarist Raj, a native of surf-rock’s birth state, California, whom Tosh met through a classifieds ad. Tosh and Coplen had always been surf-rock fans but were inspired to start the Hangars after learning to truly appreciate the groovy, frenetic, hypnotic quality of Dick Dale & The Del Tones’ early-’60s recordings and The Mummies from California circa the late 1980s.

The Hangars hadn’t been playing together long when Tosh and Coplen approached Jennifer. Half of The Ape Hangars’ eight tracks are Raj originals. The others are covers obscure and famous, including Les Mustangs’ “Drums” and, from the Repo Man soundtrack, The Plugs’ “Reel Ten.”

Jennifer, who also plays theremin on Raj’s “La Muerte te Sigues,” said The Ape Hangars is an especially personal project. She and Robby “became obsessed” with vintage equipment, tape delays, and ’60s-era sparkle-green drums as a result of Terrapin, she explained.

“It felt right to be working with these guys on analog equipment and letting this come full circle,” she said.

And, yes, Tosh plays his classic sparkly green Rogers drumkit on The Ape Hangars. He and his bandmates also managed to scrounge up some vintage Farfisa and Vox organs for Fleming’s swooping, shimmering parts, which provide such a pleasant counterpoint to Raj’s fiercely galloping six-stringed pyrotechnics.

Day jobs, side projects, and unexpected family events are what have kept the tracks on the shelf so long, Coplen said. Some Fort Worth shows are on the horizon, but nothing has been confirmed yet.

Having played pretty much every style of music, from art-metal to slow punk, Coplen feels The Ape Hangars’ nostalgia-tinged but always-fresh sound represents by far the most artistically satisfying genre he’s ever worked in.

Surf-rock, he said, “is a super-intense form of music. Before prog, it was one of the first kinds of rock music that departed from the standard chord changes into different tonalities and even Middle Eastern scales. It becomes tiring just playing the standard blues and rock ’n’ roll chords all the time. Surf-rock requires a certain level of musicianship.” 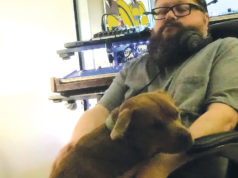