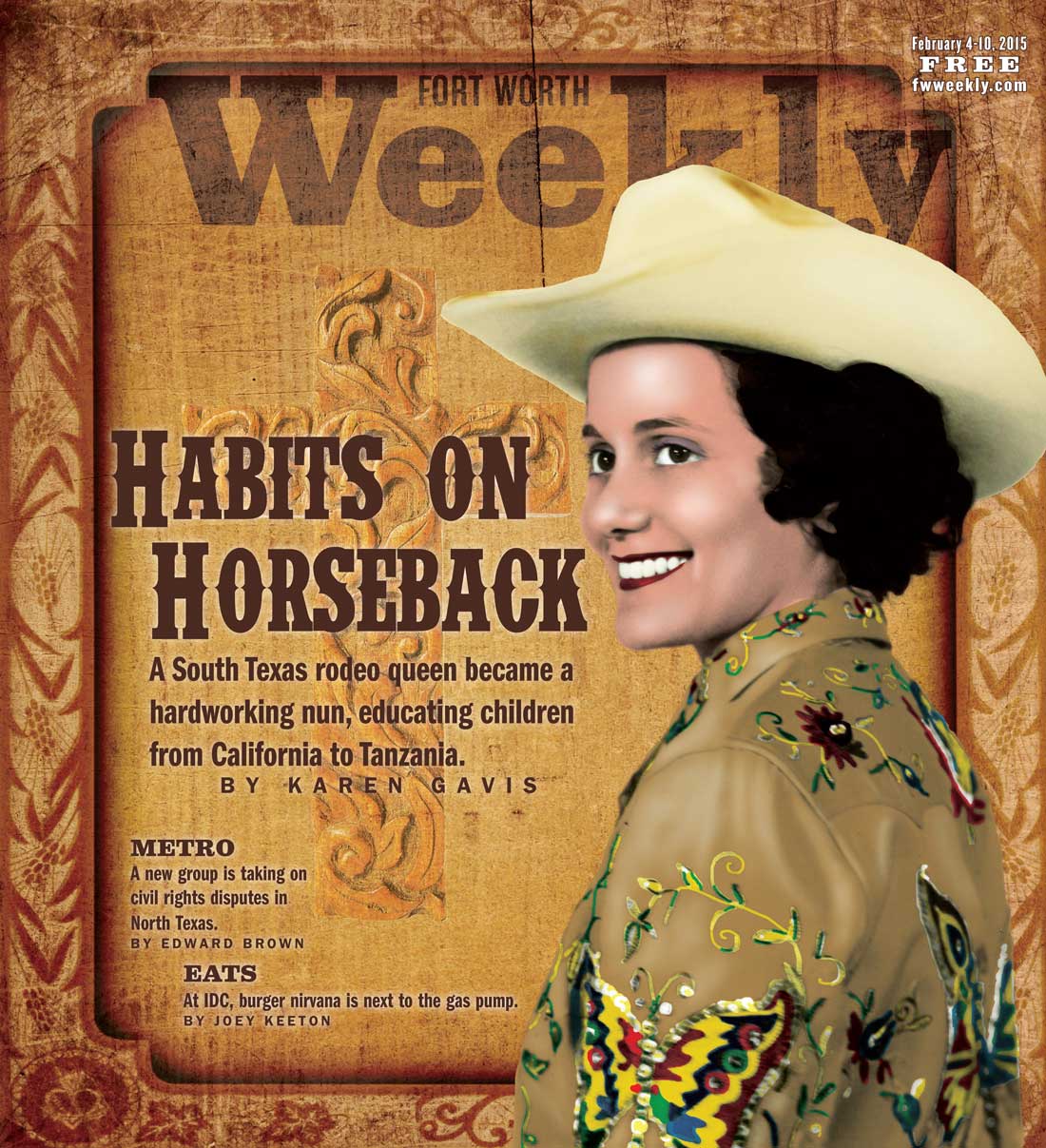 A swanky Western jacket hung nearby as Sister Camella Menotti, 84, thumbed through a folder filled with old photographs and newspaper clippings.

“We’re supposed to keep stuff like this. We put it out when we die. We have a table, pictures and stuff,” said Menotti.

She has been a Catholic nun for more than 60 years, but before that she was a cowgirl — both on the ranch and in the arena — and a rodeo queen. The hardy, spirited Texan who once mended fences and doctored cattle now takes care of the computers and helps tend the trees at the Our Lady of Victory Center just off South Hemphill Street. She’s on the list of nominees for induction into Fort Worth’s National Cowgirl Museum and Hall of Fame.

The folder holds a record of Menotti’s life and a career of service stretching from South Texas to East Africa. There’s a black-and-white photo of her at 21, sporting a white cowboy hat and sitting on a white-faced bay horse named Pride.

The year was 1951, and Menotti rode high on a silver-mounted saddle borrowed from the local sheriff. She won the Texas City Rodeo Queen competition — for what she now calls “just prissing around the ring.” Menotti said she spent the whole $150 in prize money on photographs of herself to give to family members.

“It was cold. I didn’t have a jacket or anything, ’cause you wanted to show off everything,” she said. “At that time, people would have a little bottle of whiskey or something in their boot. I’d have a few swigs of that.”

As a young woman in her hometown of Dickinson, near Galveston, Menotti taught in the local Catholic school. She began as a kindergarten aide and taught second-graders the following year. She had everything she wanted in Dickinson, she said, including family support, plenty of good food, and friends. She dated, but the friendships she made with the sisters at the school helped convince her of her calling.

“They were very affirming to me,” she said. “You know, sometimes nuns kind of have a … feeling toward people who are leaning toward a calling of the Lord. And they nourished that.”

After weighing the matter for more than a year, Menotti joined the convent in 1952. In some ways, her life since then has mirrored the changes within the church. From her style of dress to the declining number of sisters to the dawning of the digital age, she has continued to adapt. Menotti’s strength and resilience keeps her moving forward, even now, as she battles cancer.

Menotti entered the religious order of the Sisters of St. Mary of Namur in Fort Worth, where the order has its U.S. headquarters. In the order, she took the name Louis Ann, after members of her family. She went back to being Camella in 1975, when nuns were allowed to resume their birth names.

Now white-haired but still energetic, she lives with 23 other sisters at Our Lady of Victory Center, a two-story retirement home and infirmary for Catholic nuns. Built in 1987, the center sits across from boarded-up buildings along Shaw Street, near Hemphill and West Berry streets, and northwest of a looming, five-story Gothic Revival-style structure, a former boarding school for girls where Menotti attended junior college.

Menotti said the sisters lived in the historic building, which opened in 1910 as Our Lady of Victory Academy, until it was deemed a fire hazard by city officials. The order then sold the structure and built the OLV Center.

Instead of a horse, Menotti now rides around on a golf cart with Lilly, the center’s tail-wagging pooch. She planted the pine trees for the center’s Meditation Garden, and about 10 years ago she planted pear, apple, peach, and fig trees as well.

“I’m going to look after them because every summer I make delicious preserves, and the sisters love them,” she said. “[The trees] take care, you know. You have to trim them, you have to feed them, you have to doctor them. They get bore worms.”
Until recently, Menotti also took care of the grounds. Fixing things, she said, is just one of the skills she picked up from her father.