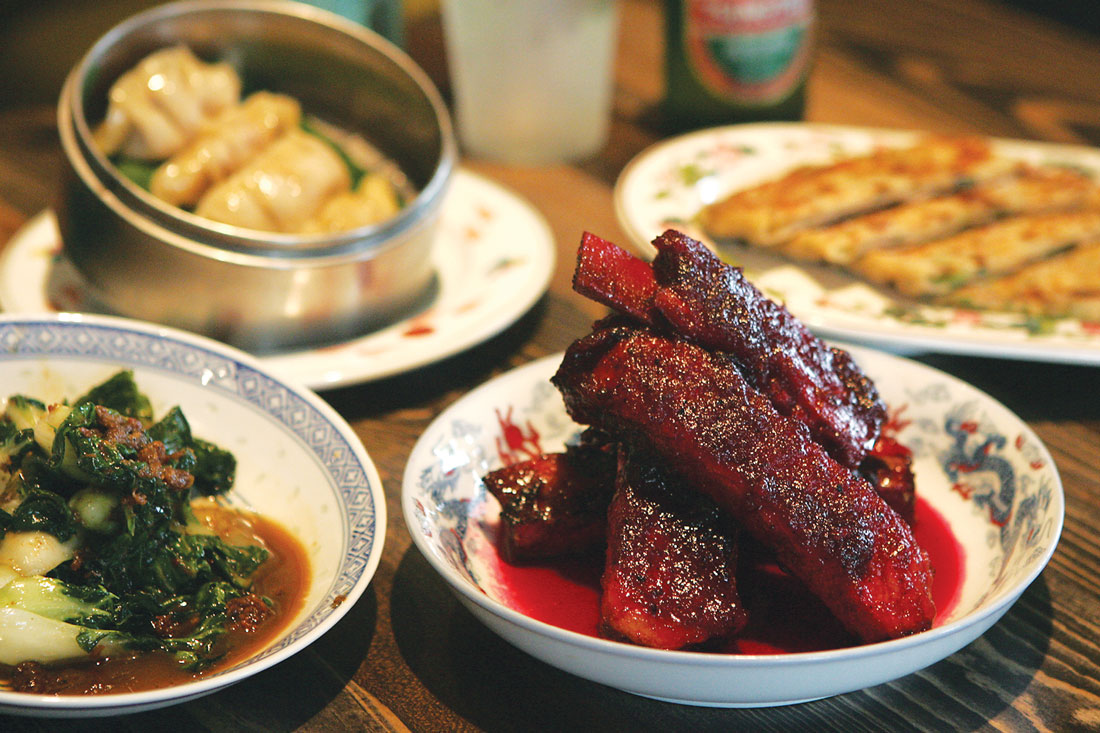 Cannon Chinese Kitchen proprietors Jarry and Mary Ho have had more than their share of successes and setbacks. In June 2014, an accidental fire forced the temporary closing of the duo’s first restaurant, the popular Tokyo Café. Fortunately, their other venture, Shinjuku Station, kept their dreams afloat while they rebuilt. Now the Hos have launched their first Chinese food endeavor. Cannon Chinese Kitchen offers several traditional selections that are free from the heavy sweet and sour sauces that commonly bog down Chinese cuisine in buffets and strip malls.

The restaurant occupies a refurbished 1920s home in a quiet Near Southside neighborhood. Parking is a breeze. The location isn’t near any other businesses. The space’s old, worn hardwood flooring juxtaposes sharply with vibrant, Asian-themed wallpaper and gives the dimly lit eating area a refined yet quirky feel.

The first plate out, the hot and sour soup, was a refreshing take on a traditionally simple appetizer. The rich broth was full of porky goodness, and the small, rubbery blocks of dried tofu, thinly sliced mushroom, and bamboo shoots each added a unique texture and flavor. The soup was intricate enough that we avoided the temptation to add any condiments. One unexpected ingredient did catch our eye. Bits of dried lily flower, our waitress said, were added just for that day due to an oversupply in the kitchen. The staff here tries not to waste anything if it can be helped, she said.

The four steamed heritage pork and leek dumplings were simple and a bit underwhelming. The dough was thick and slightly chewy, and the meat was mild — a bit too mild, actually. Our server suggested that we add a little Maggi seasoning (similar to soy sauce) and chile oil to liven things up. The trick worked, but we would have preferred it if more of the seasonings were in the dish, not on it.

The maple leaf duck stir fry was scrumptious. The medley of bean sprouts, diced carrots, and bok choy cabbage were cooked to al dente perfection and bathed in a mild soy- and maple-flavored broth. Mixed in were generous chunks of poultry and bits of fried duck fat cracklings. Rice came on the side. The salty fried topping added a pleasant jolt to the otherwise mild entrée. Our only disappointment: The star anise (a Chinese spice with a pungent, woody, licorice flavor) sometimes overpowered the delicate balance of the other ingredients.

The pork ribs were a feast for the eyes as well as the stomach. Four large, bright, cherry-red porksicles came served over a thick, syrupy gravy. Again, the rice came on the side, and it turned out to be the perfect way to sop up the slightly tart sauce. The meat had a pungent rice vinegar scent and a sweet raspberry jam-like flavor. Each bite was oily, fork-tender, and delightful.

For dessert we went for the chrysanthemum panna cotta. The cupcake-sized confection looked and smelled like a giant campfire-roasted marshmallow. Beneath the outer layer was a frothy meringue with a light taste of chrysanthemum and honey. Under the foamy delight was a thicker cream that had a mild vanilla and ricotta cheese flavor. We savored every bite.

Throughout the evening, our waitress took time to answer our questions. Every dish was well-prepared, and we were reminded how wonderful Chinese food can be.