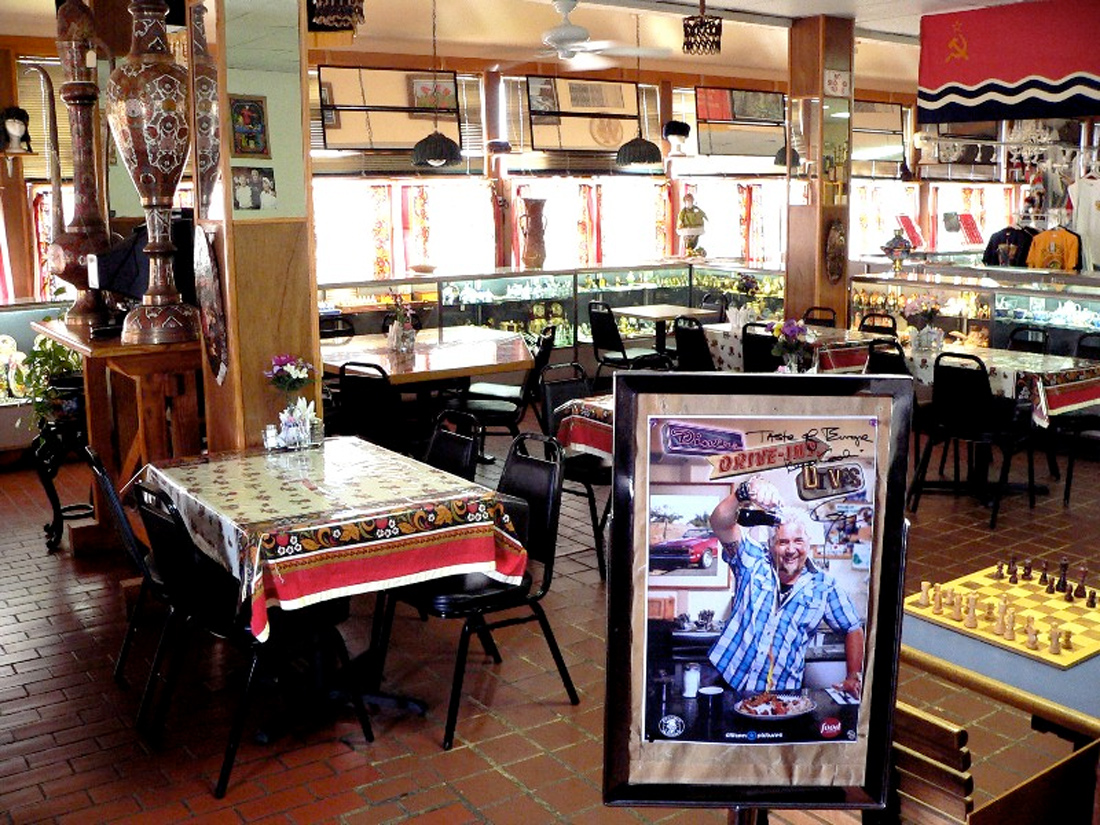 Since taking over this column (it will be four years next week), I’ve touted Arlington as the best bang-for-buck food town in Tarrant County. Sure, it’s growing at the pace of the Game of Thrones opening sequence, and pricey chains are moving in fast. But it still houses an untold amount of cool, small, interesting mom-and-pop restaurants that serve great food for a fraction of what you’d pay in Fort Worth. And Taste of Europe (1901 W. Pioneer Pkwy., 817-275-5530) is a perfect example of what I’ve been blathering on about.

It doesn’t get more interesting than the place’s Russian gift shop/Army-Navy store/divey scratch-kitchen café vibe. Where else can you see a framed picture of Guy Fieri, t-shirts emblazoned with images of Stalin and Lenin, rows of authentic Russian military garb, glass cases full of handcrafted Russian nesting dolls and religious iconography, shelves of foreign movies and music albums, and an Eastern European snack aisle? Seriously, had it started snowing or a Fiddler played on the roof, I would have sworn I had passed through some Narnia-like portal to Mother Russia. Even the charming owner’s ringtone played Russian folk music.

The café consists of only about a half-dozen tables decorated with ornate tiles dropped in the middle of the Soviet-era time capsule. The menu consists of cuisines from all over Eastern Europe and has flags next to each dish. That didn’t help me much since I stopped learning about world affairs around the time Yakov Smirnoff planted his roots in Branson, Missouri.

A guest and I started with the appetizer sausage sampler ($5.95), large portions of cervelat sausage from Switzerland that looked and tasted a little like salami, snappy bratwurst from Germany, and housemade bologna, all sitting atop a zesty sauerkraut salad. I also went for a cup of the insanely fresh and well-seasoned borscht ($3.45), Taste of Europe’s take on the traditional Russian red beet soup. With a bright red broth, the soup was beautifully aromatic, and the beets were soft without being mushy.

My entrée, according to the menu, was featured on the Food Network, which explained the hanged pictures of Fieri. The kolduny ($9.95), or grilled potato pancake, was stuffed with beef and chicken, with sour cream served on the side to lighten up the starchy dish. Though the lunch portion didn’t look formidable, I couldn’t finish the second flapjack –– the first one sank in my gut like a nuclear sub. Any normal person might have stopped eating at that point, but after tasting the remains of my pal’s half-eaten order of the chicken blintz ($7.95), a large crepe stuffed with chicken and caramelized onions and topped with a light, creamy gravy, I grabbed my hammer and sickle and went back to work.

Quirky, unique, locally-owned places like Taste of Europe represent everything I like about Arlington. I hope that city doesn’t grow so fast it loses what makes it cool. Or as Smirnoff might say, “In Arlington, Russian diner finds you.”