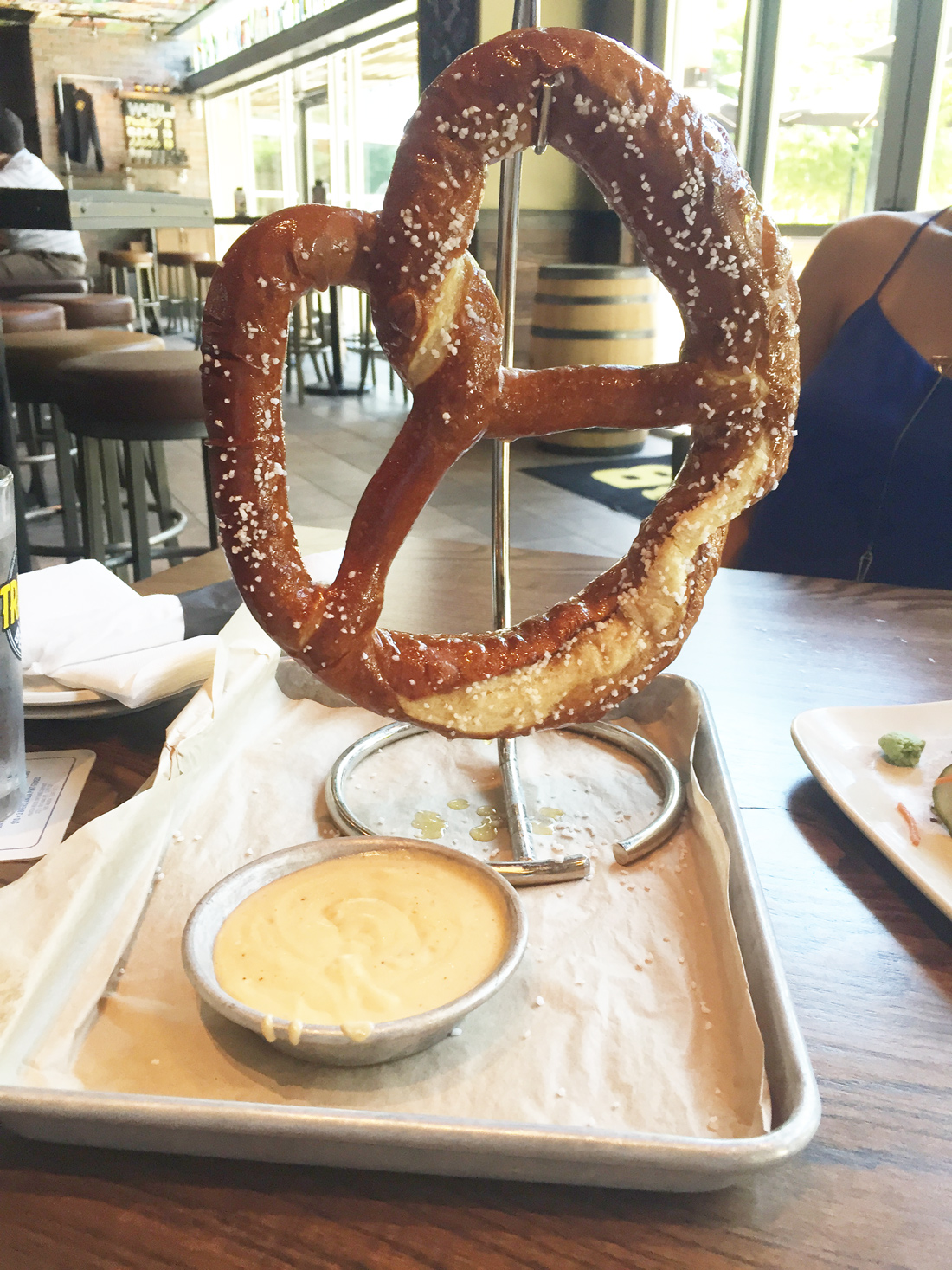 The German pretzel ($8), with house-made beer cheese ($2), is the kind of gimmicky snack you might find at a state or renaissance fair. But it seemed right at home with the rest of WOB’s beer-centric menu.

The new West 7th pub boasts an almost comically huge selection of brewskies –– like, it has all of them. All the beers. And there’s a suggested beer pairing with each item on the food menu, and a good portion of the grub has a brew cooked into it.

There’s a beer-brined chicken breast in the pesto grilled chicken sandwich ($10), a Chimay burger ($12) with cheese and an aioli made with the stout Belgian brew, and even the salad of spring greens and kale ($7) has Framboise in its vinaigrette. We get it, World of Beer.

The place is only open for lunch three times a week (Friday through Sunday), and on my recent lunch visit, the dining room was mostly empty. The few people who were there all had a pint in hand. I guess that’s why our polite, efficient server’s face contorted so violently when my guest and I told him we were abstaining from suds. He looked at us like we had just insulted his mother. I like to believe he thought we were a part of a television prank show in which people who don’t want beer go to places that serve more than 400 of them.

When he brought over that pretzel, he looked as if the order of the world had been restored. I quickly understood why. When my guest tore off a hunk, steam billowed from its soft, spongy interior. It was a salty, buttery, moist treat, and the beer cheese sauce added a layer of artery-clogging decadence.

The appetizer of seared ahi tuna ($13) didn’t quite live up to the first act. But what could have followed that pretzel? The tuna, rolled in sesame seeds, was pedestrian at best. The ginger-soy dipping sauce added a nice spice, but it wasn’t enough to cover for the bland fish.

For entrées, we stuck with the formula of ordering one beer-centered dish and one healthyish plate. The turkey club ($10), with its three layers of oven-roasted turkey, bacon, mayo, lettuce, tomatoes, and toasted marble rye bread, was stacked so high we could have used it as a raft. All of the ingredients were fresh, light, flavorful, and well-balanced (literally).

The Guinness brat sliders ($8), served on a warm pretzel roll with caramelized onions and peppers, were more on the heavy, salty side. The brat’s casing had a lovely snap, and the onions and peppers elevated the dish to something more elegant than just bar food.

Our server was disappointed when we left without pointing out the hidden cameras. But he got the last laugh. Even when you don’t want to drink a fermented adult beverage, they put it in your food. You win, World of Beer.