At this time of year, I get sort of annoyed with my friend Russell.

That’s not actually fair to him. Russell is a good guy with a lovely family and he’s a fine citizen, with no outstanding warrants to my knowledge. The reason I’m vexed with Russell is quite unreasonable, actually : he’s not a football fan and therefore doesn’t play fantasy football.

Of course, I shouldn’t be bothered by him;  It’s me and my football issues that are the problem. I feel like I’m dead weight in my fantasy league. There, I said it, got it out in the open (exhale). I’m that guy who fails to update his roster for weeks on end. If my quarterback is in a bye week or sustains a season-ending hangnail, my opponent that week pretty much gets a free win. I let the computer autodraft for me. In short, I’m apathetic.

The thing is, I’m very much not apathetic about sports, as the three or four of you (including my father and editor) who read this column regularly may know. My problem is one of self-control.

I could easily get carried away with fantasy sports. I’d love to munch data and micromanage a roster like crazy. Constant monitoring of the latest league-wide minutiae, however, would require oodles of time a business owner doesn’t have. So I don’t even try fantasy sports like baseball and hockey that play lots of games. Football’s once-a-week approach better tolerates indifference.

I forced myself to adopt this approach a few years ago after spending a sizable amount of time researching players and preparing a draft list for a league in which I used to play. I even created a logo (sorry for the trademark infringement —  it was right after the XFL’s bold experiment). We got into the season and I got busy with some work stuff and forgot to update my roster to remove a key player on his bye week. I lost that week, of course, and heard about it from the guy vying with my opponent in the standings. He was right : My inattention was bogus. When that league decided to raise the entry fee to $100 the next year, I decided I needed to either go hard or go home. I went home.

Luckily, a good friend named Trent runs a fantasy league and he offered to let me in despite my likely failings as an owner.

Trent is a fantasy sports guru. He’s won a number of leagues and in high school, he even ran a USFL league (which he won). In those pre-internet days, we couldn’t have spent all our time gathering data on that league even if we had wanted to. We drafted by passing around the same preseason preview magazine and basically picking random names. Trent guessed right on Jim Kelly and John Jenkins’ Run-and-Shoot offense. 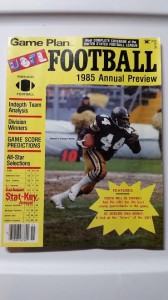 Maybe Trent allows me to play in his league because he’s a good guy (he is) or maybe he’s keen to get that occasional free win when I forget that some All-Pro running back or other has been on injured reserve for three weeks. Whatever the reason, Trent has assured my that my detachment would be OK with him and the XFL Rejects were welcomed (maybe too strong a word there) into the circuit known as “Fractional Points Rule.”

In the ensuing years, I actually managed to win the league once, although in the depths of my apathy I had forgotten it until the commish reminded me in the course of researching this article. Autodraft stuck me with Peyton Manning and he went nuts that year. I tend to feel bad when I beat someone, knowing it’s all luck. The one bit of work I have actually put into it the last couple years (other than really trying to occasionally, every once in a while, remember to adjust my roster if someone has a bye week) is to cut any Redskins the computer drafts for me. As a Cowboy fan, I realized it diminished my enjoyment of football on Sundays to cheer for any part of the team with the least sensitive name in pro sports. I dropped Alfred Morris the year after he gained 1600 yards just because of his team affiliation. I didn’t win many games that year, but I also didn’t experience the angst of having to root for him to shred the Pokes’ D twice that season.

You’ve now heard my fantasy football confession and you’re probably thinking : “How does this involve that Russell guy?” Well, see, when Trent first started the league he got Russell to join it. As a math genius, Russell could really make hay with advanced statistical analysis if he wanted to, but he just doesn’t really like football. So after a few years, he dropped out of Fractional Points Rule.

I hated that, because as long as Russell had a team, there was someone in the league more apathetic than me. Now I was on my own, my lethargy exposed to the world. It was tough to swallow.

Thus I’ve decided to make a guy who’s been a loyal comrade since 7th grade the scapegoat for my fake football failings. I realize this situation is really on Trent and me. We had four years of high school to help Russ realize how rewarding obsessing over sports can be and we failed. Kind of like the XFL Rejects will do again this year.