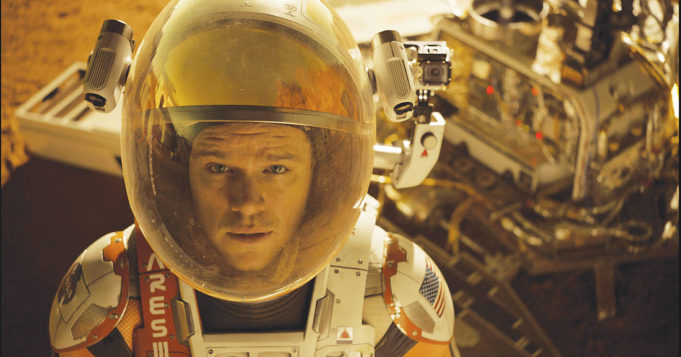 Of late, directors the caliber of Christopher Nolan and Brad Bird have made science-fiction spectacles engineered to lift our spirits and turn our faces to the skies again but only wound up falling on their faces in Interstellar and Tomorrowland. They didn’t realize that simply telling a well-told adventure yarn might do the trick far more effectively. That’s what Ridley Scott’s The Martian does, and while it’s not as technically innovative or visually sublime a space thriller as Gravity was, it’s a very solid piece of Hollywood entertainment.

The movie starts with a hurricane-force dust storm on Mars forcing NASA to suddenly abort its third manned mission to the Red Planet. As the crew members evacuate, astronaut Mark Watney (Matt Damon) is hit by a flying satellite dish and, to all indications, killed. With everyone else’s lives at risk, the commander (Jessica Chastain) reluctantly orders the crew to leave. However, Mark is alive, though stripped of his communication devices. Back in the safety of the astronauts’ habitat, he makes a video log to take stock of his predicament: “It’s gonna be four years before another manned mission to Mars, and I’m in a Hab designed to last 31 days. If my oxygenator breaks, I’ll suffocate. If my water reclaimer breaks, I’ll die of thirst. If the Hab breaches, I’ll just sort of implode. And if none of those things happens, I’ll eventually run out of food.” His conclusion: “I’m gonna have to science the shit out of this.”

Much screen time is given over to Mark’s lonely efforts to science himself away from death, though this is no study of lonely survival like Cast Away or 127 Hours. Just as much time is devoted to NASA’s attempts to do the same once they realize what has happened. The scope of this movie is such that it allows for many heroes besides Mark: the lowly satellite tech (Mackenzie Davis) who first works out that Mark is still alive; the astrodynamicist (Donald Glover) who conceives a last-ditch plan to save Mark; the Chinese scientists (Eddy Ko and Chen Shu) who offer up their country’s classified technology to the rescue effort; the NASA astronauts who make a considerable sacrifice to get their man back themselves. The emphasis on the labors of so many people gives the movie a feeling of collective triumph, similar to Ron Howard’s Apollo 13, another tale of a great rescue in space.

This rather comes at the expense of character development. The likes of Chiwetel Ejiofor, Jeff Daniels, Sean Bean, and Kate Mara are in this movie, but we don’t learn much about who their characters are away from the job. Even the straitlaced commander is reducible to her weakness for the 1970s disco songs that form the soundtrack. (Mark has only her playlist to listen to, and he hates it. “No! I will not turn the beat around!”) At 144 minutes, this movie certainly has time to throw in a few telling details, and it should have taken the opportunity.

Still, the film is funny enough to make that running time pass smoothly. Many of the best lines and situations are taken from the Andy Weir novel on which this is based, as when NASA’s media relations director (Kristen Wiig) cluelessly asks about the name of the agency’s Project Elrond and is immediately bombarded by the Lord of the Rings geeks around her. Screenwriter Drew Goddard, who wrote and directed the brilliant The Cabin in the Woods, adds his own zingers. The movie boasts a number of comic actors like Wiig and Michael Peña as one of Mark’s fellow astronauts. Glover gets some memorable slapstick bits, too, like the one in which he tries to dispose of some cold coffee.

Best of all is Damon, who’s convincing as both a wonky scientist and a frat boy jokester, which suits both the character and the grimness of his situation. (Succeeding at growing potatoes in Martian soil, he proclaims, “I am the greatest botanist on this planet!”) Director Ridley Scott’s recent movies have been sunk by deadening self-seriousness, so all this comedy gives his filmmaking a badly needed jolt of life. He mostly gets out of the way of his actors, but he comes up with one amusing sight gag after Mark accidentally causes an explosion.

All this means that The Martian earns its uplift honestly, and while it doesn’t rank with Scott’s greatest films, it is on a par with his Gladiator as a pleasing thriller for the popcorn crowd. For a 78-year-old director who was starting to look like a spent force after Robin Hood and Exodus: Gods and Kings, this is a heartening late-career triumph.