James Franco spent his early 20s taking lead or secondary lead roles in gritty urban thrillers like Deuces Wild, Sonny, and City by the Sea, not to mention the sympathetic villain in the Spider-Man films. With his smoldering good looks and streetwise sensibility, he seemed a good bet to become a conventional Hollywood leading man, so it’s no wonder that he made a hard push to get there. It didn’t work, mostly because his movies in the early 2000s pretty much sucked.


Thank God for that, too, because failure has driven him to stop picking projects designed to set him up for a blockbuster franchise. Instead, he’s seeking out roles that he finds personally rewarding, even ones as unorthodox as the 40-episode stint on General Hospital that he did last year. As a result, the 32-year-old Franco is a far more interesting performer now than he would have been had he spent the last decade headlining mediocre big-budget thrillers and romantic comedies. 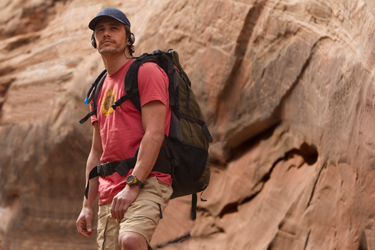 Just named as a co-host for the upcoming Oscar telecast, Franco is being talked up for an Oscar nod for his latest film, 127 Hours, though his portrayal of Allen Ginsberg in the recent Howl is actually more deserving of the buzz. Both films are vital, because if you put those two performances side by side, you’ll get an idea of Franco’s incredible range. He’s no less convincing as a thrill-seeking, wisecracking straight Western outdoorsman in 127 Hours than he is as an owlish gay New York Jewish beatnik poet-intellectual in Howl. If you then put those two performances next to his comic stoner turn in 2008’s Pineapple Express, you’ll probably be left wondering if there’s anything this actor can’t do.

In 127 Hours, he plays Aron Ralston, whose real-life story you may have heard on cable news a few years ago. Ralston was an engineer from Colorado who loved to spend his off-hours climbing mountains and hiking through canyons. In 2003, he was navigating Blue John Canyon near Moab, Utah, when an 800-pound boulder suddenly fell, leaving Ralston trapped in a standing position with his right arm wedged between the rock and the wall of the slot canyon. After five days and seven hours that left him on the point of death by dehydration, Ralston finally freed himself by amputating his arm with a dull pocket knife. The script is based on Ralston’s memoir of the incident, Between a Rock and a Hard Place — changing the title was the right move.

A movie with one character trapped in a single location risks becoming monotonous and gimmicky, like the recent Buried. Director/co-writer Danny Boyle changes things up by giving us hallucinatory sequences (a thirsty Aron fantasizes about colas, sports drinks, and a flood washing him out of the canyon) and flashbacks depicting Aron’s relationship with his French ex-girlfriend (Clémence Poésy). These glossy, swirling, candy-colored scenes — and the otherworldy glow that suffuses Utah’s natural scenery — give the movie the look of a typical Boyle film. You’ve got to hand it to the director: Whether his movies are about Scottish drug addicts, English zombies, or Indian street kids, they’re all identifiably by the same hand. Also typically of Boyle, he doesn’t flinch during the climactic scene in which Aron violently wrenches his own arm to break the bone and then messily hacks it off, a sequence that famously caused festival audience members to vomit or faint.

The film leads up to this moment of resolve, but the moment is powerful because of the movie’s portrayal of Aron as a bon vivant adventurer with a careless streak. This is where Franco is crucially well-cast. His smile is the key to his whole persona; compared to other distinctive leading men’s smiles like George Clooney’s sly, knowing smirk or Denzel Washington’s billion-kilowatt gleamer, Franco’s smile is a big, goofy grin that hints at his charmingly off-kilter sense of humor. We see that fun-loving side of him in a prologue showing Aron flirting with two young female hikers (Kate Mara and Amber Tamblyn) while guiding them toward a cave grotto. It’s even more apparent in a late scene when a semi-delirious Aron makes light of his predicament by turning it into a comedy sketch wherein he portrays his own diffident self, a smarmy talk-show host interviewing him, and audience members asking questions. 127 Hours tries to tease some sort of philosophical meaning out of Aron Ralston’s accident, but this isn’t a deep movie by any means. It’s just a good survival yarn with a charismatic star turn by a rapidly evolving actor.