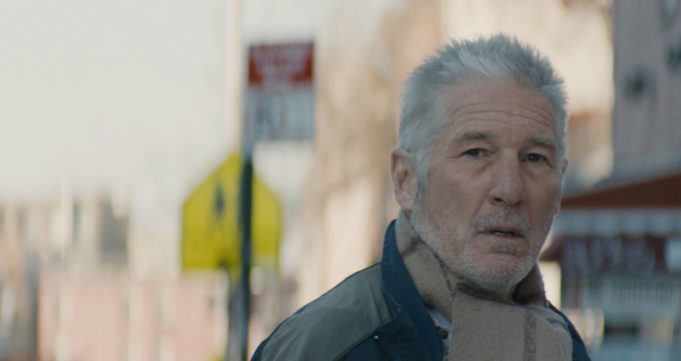 Richard Gere shouldn’t play a homeless person. Let’s just say that off the bat. He gives it a good try in Time Out of Mind, which oddly enough opens only in Burleson this weekend. He grows out his hair and several days’ worth of stubble, and he wears shabby clothes that look like he’s been sleeping in them. Nevertheless, his efforts are for naught. He’s too polished a presence. It’s clearly the same guy from An Officer and a Gentleman and Chicago in those rags. Too bad, because the movie that he’s in is rather good despite his miscasting.

He plays George Hammond, a widower who drinks too much and appears to be suffering from some unspecified mental problems — he forgets things easily and is shocked when he realizes that he is, in fact, homeless. He keeps tabs on his estranged daughter (Jena Malone) as she goes to and from work as a bartender, but most of his time is devoted to trying to survive on the streets of New York City, moving from location to location and trying to scrape together enough cash to eat and a warm place to sleep in the dead of winter.

The Israeli-American writer-director Oren Moverman (who made Rampart and The Messenger) has clearly been watching the films of Jean-Pierre and Luc Dardenne, the Belgian brothers who have seamlessly incorporated French movie stars into stories about the poor and downtrodden. In their spirit, this film is filled with recognizable actors who disappear into their characters in ways that Gere doesn’t: Steve Buscemi as a building superintendent, Ben Vereen as a chatterbox of a homeless man, Kyra Sedgwick as an aluminum can collector.

As George tries to find and keep a place in a shelter, Moverman keeps his camera at a distance from his characters, often filming them from across the street or from behind glass windows and doors while we hear the chatter of passersby going about their lives. His rendering of the supporting characters is balanced — for every pedestrian who laughs or throws rocks at George, there’s another who tries to give him what aid they can, and for every social worker who tries to help him out, there’s another one who’s bored and tries to get him out the door as quickly as possible. This mix, along with the lack of background music, gives the movie a realistic feel and keeps it away from the usual sentimental pitfalls of Hollywood movies that try to address homelessness.

George’s mental illness means that we don’t get to know all that much about him, but much like Kelly Reichardt’s superior 2008 film Wendy and Lucy, this movie successfully makes the case that his mere existence is reason enough for us to care about him. Near the movie’s end, when George walks into the bar where his daughter works and tries to hold a halting conversation with her, the climax feels earned. Time Out of Mind takes some patience to watch, but it turns out to be worth the trouble.