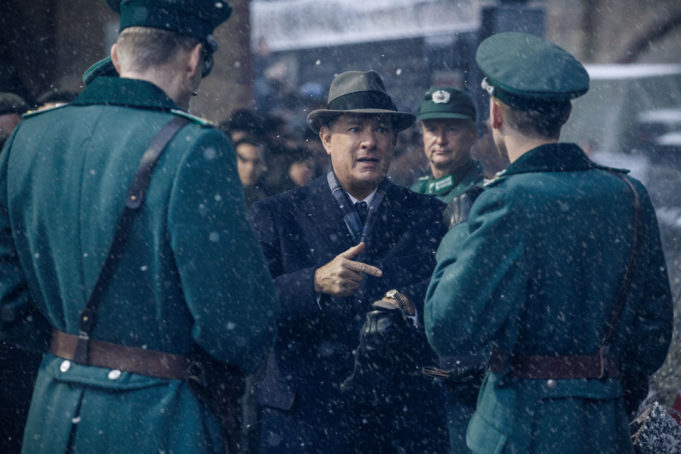 Steven Spielberg directed Bridge of Spies from a script that was co-written by the Coen brothers. Not so long ago, these filmmakers seemed to be diametrical opposites: Spielberg was the representative of Hollywood’s old guard and a purveyor of childlike wonder, while the Coens were the new-jack indie operators dealing in brutal realities. Age and success now have brought these guys to a middle ground — albeit one that’s far more Spielberg than Coen — for this spy thriller that depicts real-life events that happened during the Cold War. The collaboration between these otherworldly talents seems like it should be fantastic. So why did it leave me unmoved?

The film begins with Rudolf Abel (Mark Rylance), a British-born Soviet spy masquerading as a middle-aged artist, being arrested by the FBI in his Brooklyn apartment in 1954. Jim Donovan (Tom Hanks) is assigned to defend Abel, even though he’s an insurance lawyer who’s never tried a criminal case, the assignment will bring him public hatred, and his client is guilty beyond doubt. Despite a trial blatantly rigged in the prosecution’s favor, Jim manages to salvage Abel’s life by convincing the judge that America may need the spy as a bargaining chip in the future. That comes six years later when U2 pilot Francis Gary Powers (Austin Stowell) is shot down while making a flight over the Soviet Union, causing the U.S. government to call on Jim to act in an unofficial capacity to broker a prisoner exchange between the superpowers.

The movie’s first half is divided between Powers’ training as a pilot of America’s top-of-the-line spy plane and Jim’s attempts to see his client through the judicial process. The Powers material is the least compelling part of this movie and could have easily been cut from this 135-minute film. Stowell (who appeared in Whiplash and the Dolphin Tale movies) doesn’t do anything interesting with the part, though to be fair, Powers doesn’t appear to have been an interesting person, merely one who got caught at a certain place and time. The only thing this part of the movie brings us is a fairly realistic re-creation of the U2 plane being shot down.

The trials yield better material, where Jim appeals the verdict all the way to the Supreme Court and unsuccessfully begs them to reverse the abuses of the lower courts: “Shouldn’t we show our enemies who we are? Is not who we are our most powerful weapon against them?” Our glimpses of Jim’s home life don’t give us much of interest, and Amy Ryan is wasted in the role of Jim’s wife. However, this part contains the movie’s complement of soaring rhetoric as well as the best performance here, a beautifully self-contained turn by Rylance (who has done most of his acting on the British stage) as the fastidious, soft-spoken, tight-lipped agent who never shows any stress — when asked about that, he readily answers, “Would it help?” — and comes to appreciate his lawyer’s efforts to do right by him.

The movie’s latter half takes place in an East Berlin that’s still bombed out from World War II. This is the part that most closely resembles a spy thriller, as Jim goes beyond his brief and tries to trade Abel for both Powers and Frederic Pryor (Will Rogers), an American economics student who got caught on the wrong side when the Berlin Wall went up. Jim triangulates the Soviets and East Germans against each other while keeping his exasperated CIA handlers at arm’s length. Armed with only his powers of persuasion and a smattering of German, Jim negotiates situations ranging from an encounter with a street gang demanding his overcoat on a freezing day to going through a low-level flack (Max Mauff) to convince the East Germans that it’s in their best interest to do everything to free Abel.

Nice as this is, this is where the movie runs into trouble. Spielberg sets us up for the story of a fiery idealist who challenges the system only to make a left turn into the story of a pragmatist who works within the confines of the system, and the change in tone is too jarring. He has run into trouble before striking a proper balance between his heroes’ small-picture focus and the big-picture things that they accomplish. He gets lost among the bureaucratic details here, just as he did with Lincoln. (In Schindler’s List, on the other hand, he got the balance mostly right.) Bridge of Spies gives you quite a bit to admire, but as a Cold War spy thriller, it has only slightly more impact than The Man from U.N.C.L.E. I was expecting more from these filmmakers.