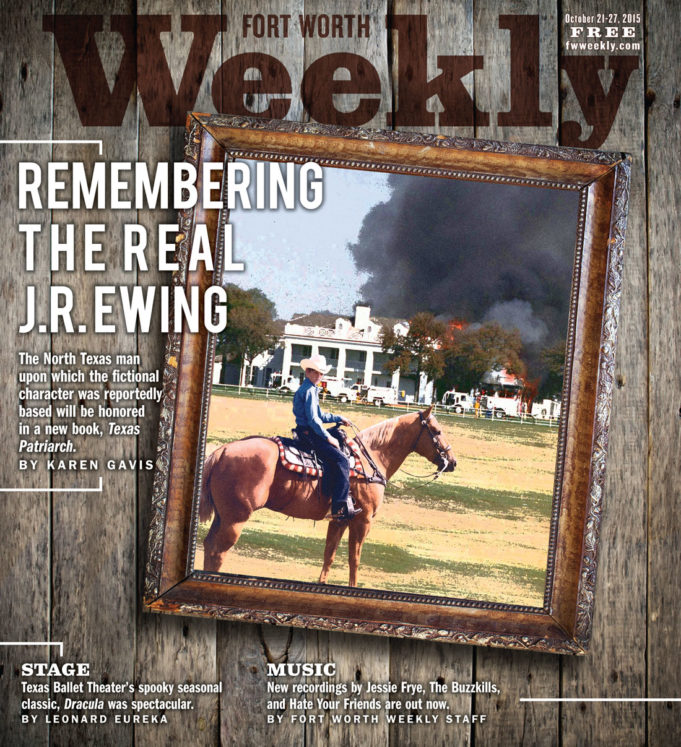 Sitting at his office in Dallas, Douglas D. Box, wearing broken-in cowboy boots, faded jeans, and a blue, pearl-snap shirt, looked as comfortable as he probably does on a ranch. That’s likely because the 58-year-old father of three grew up on the Frisco ranch where pilot episodes of Dallas were filmed in the late 1970s. “I was fired up about it big time,” he said. “Who wouldn’t want Hollywood to be on your front door step?”

Sitting on 2,000 acres, Box Ranch was one of three ranches (two in Texas, one in Florida) owned by his father, Cloyce Box, a well known oilman who was able to acquire, maintain, and lose much of his wealth in the cement industry.

Cloyce also is allegedly the inspiration for J.R. Ewing, the “nastiest” small screen villain of all time, according to TV Guide, who was played by native Fort Worthian Larry Hagman.

“If my dad was sitting here,” Douglas said, “he would just laugh at that. It’s certainly worth speculating that he may have been the real J.R. The similarities are pretty striking, because my dad was pretty notorious in his business dealings.”

But Cloyce had a few attributes that J.R. lacked. He was a professional football player, for one thing. For another, he was a pilot and World War ll Marine.

Partly to get the story straight and partly to preserve Frisco’s history, Cloyce’s legacy, and help business families avoid all-out war, Douglas is writing Texas Patriarch. The follow-up to his 2014 memoir, Cutter Frisco, will be about Cloyce’s “phenomenal rise out of poverty and how he acquired and accomplished so much and, basically, due to a lack of succession planning, how we lost the family ranch and lost the business,” Douglas said.

Modeled after Tara from Gone with the Wind, built in 1941, and estimated at around $3 million, the original main house on Box Ranch burned down in 1987. The newly painted sunroom, filled with about 75 gallons of paint and lacquer, ignited from a spark from an extension cord. Cloyce vowed to rebuild the building but lost the land in a bitter business deal. He died of a heart attack in his sleep in 1993 when he was 70. Today, all that remains of the Box family home is its skeleton

Oldest brother Don died in 2010 from complications from an earlier car accident. Gary, 62, lives in Canton, Texas, and owns a convenience store, while Thomas, 60, lives in Dallas and is president and CEO of Box International Consulting, focused on the cement industry. Douglas puts his experience to use as head of Box Family Advisors, specializing in family businesses, and writing.

Cloyce died 22 years ago this month, and Douglas is determined to see his father’s legacy honored. So many things in Douglas’ life, he said, have been fleeting: his favorite horse, Cutter Frisco; the ranch; the family oil business. Even the Frisco he knew and loved as a kid seems to be vanishing, he said.

As he talked, his carefully typed manuscript lay on the conference table near him. The second chapter is entitled “Was He the Real J.R.?” Douglas said some people are firmly convinced that the dirty dealing oil tycoon on the small screen was Cloyce to a T. But there’s no proof, Douglas said, and he himself isn’t so sure.