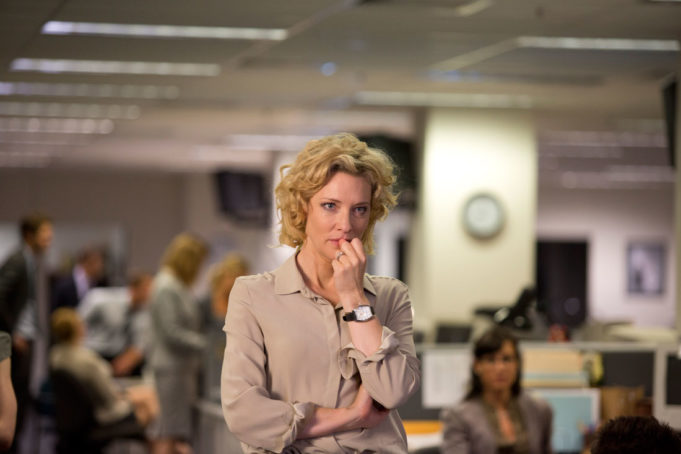 You may recall that 16 years ago, Michael Mann made a laudable, well-acted, detail-oriented journalism movie called The Insider that cast CBS News as the villain. Truth aims to repeat the trick, and its depiction of the Eye has the network so mad that they’re refusing to air ads for the film. No doubt CBS would be mortified if the picture became a huge hit and scored a bunch of Oscar nominations. I, for one, would enjoy the spectacle. I don’t see it happening, though, because the movie isn’t good, unless your idea of fun is watching Cate Blanchett get beaten with sticks for two hours.

She plays Mary Mapes, a Dallas-based producer for 60 Minutes II who, as the 2004 election looms, finds documents showing that incumbent president George W. Bush didn’t fulfill his duties with the National Guard during the Vietnam War. She and anchor Dan Rather (Robert Redford, making only a token effort to sound like the familiar TV newscaster) deliver the story, only to watch rival press outlets, the White House, and a fifth column of conservative bloggers question the reporting until CBS cravenly caves in to them and fires Mary and her entire crew while ushering Dan out the door.

Movies about American journalists like All the President’s Men used to show them as superheroes making deadlines and calling the evildoers to account. Now they’re like Kill the Messenger and show them as tragic heroes being crushed by the system, though I expect the upcoming Spotlight will resume normal service. Making his directing debut, screenwriter James Vanderbilt (who wrote Zodiac and the last two Spider-Man movies) bases this on Mapes’ 2005 memoir Truth and Duty: The Press, the President, and the Privilege of Power, so it’s no surprise that the story revolves around her. That doesn’t explain why Vanderbilt had to bring in a deluxe supporting cast (Dennis Quaid, Elisabeth Moss, Topher Grace, Bruce Greenwood) just to rattle on about how awesome Mary is. Once the story starts to unravel, the movie bogs down in scene after monotonous scene of her being sold out by her sources and higher-ups. By the time Mary’s abusive dad resurfaces just to kick her while she’s down, you’ve had enough.

Vanderbilt makes a case that Mapes’ reporting about Bush was substantively correct, even if the chain of evidence was fuzzier than it should have been. Whether you believe that or not, it’s not enough to hang a whole movie on. A political film needs to say something to the present moment, and this is neither convincing as a dirge for the death of network TV news nor as a warning against the ignorant hordes of partisan deniers and truthers who have now taken over too much of cable and the internet. Truth lets its righteousness shade over into self-righteousness, and it concentrates so much on being hard-hitting that you don’t feel anything at all.