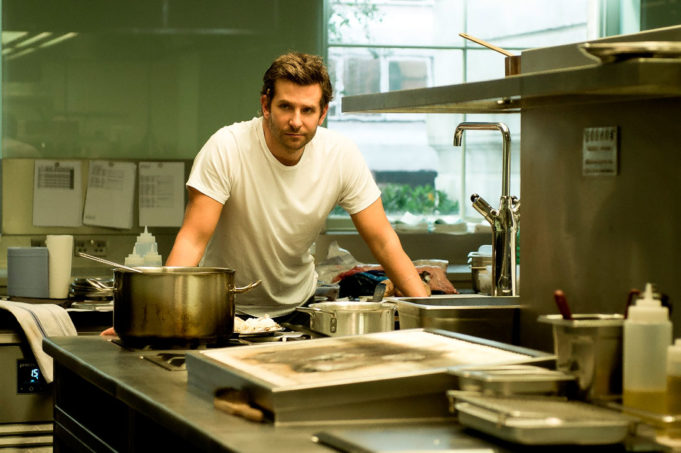 Most movies about chefs portray their subjects as divinely inspired (if occasionally temperamental) artisans who live to dazzle us with their culinary creations. Ah, but we know better, don’t we? Reality TV shows and chef memoirs have shown us a different side of the profession. Burnt dives into this other side: The chef as unstable, substance-abusing petty tyrant who lives to scream in his underlings’ faces when they peel potatoes wrong. It’s the first movie like this that I can recall, and it has a recipe for crackling drama, and yet the finished product feels oddly tame.

Bradley Cooper portrays Adam Jones, an American chef who won two Michelin stars in Paris before flaming out, leaving behind a closed-down restaurant, a pile of drug debts, and a trail of pissed-off ex-colleagues and girlfriends. Now he turns up in London, two years sober, ready to work again, and hellbent on earning that third star from the French hospitality guide. He gets a second chance, partly because people around him are afraid he’ll die if he isn’t recognized. They might be right.

It’s rapidly becoming a Cooper specialty, playing charismatic guys who are driven by their demons. Adam can be delightful company, as evidenced by his surprising defense of the food at Burger King and his observation of the immaculate all-white décor at a rival’s restaurant: “Seems like a perfect place for stoning infidels.” Yet he knows his good looks, wit, and talent in the kitchen give him leverage to act high-handedly. When he encounters a saucier named Helene (Sienna Miller), he’s so blown away by her spaghetti cacio e pepe that he gets her fired from her job so that she can work for him. He triples her pay, but then, after a disastrous opening night for his new restaurant, he humiliates and manhandles her in front of the kitchen staff. (She only comes back to work after he doubles her salary again, and after he drops his old-fogey resistance to cooking sous vide.) Never afraid of his characters’ dark side, Cooper makes that scene as unpleasant as called for, and he gets bonus points for delivering his teary climactic monologue entirely in French.

Best known as the creator of ER, John Wells directs this movie like it’s an episode of that TV show, a quick-hitting look at a near-hermetic, pressure-packed workplace full of highly trained professionals who hold conversations while they’re hunched over what they’re laboring on. It’s not a bad idea, giving us glimpses of parts of the process that most other films gloss over, like the washing up at the end of the day and detailing how employees at a high-end restaurant try to spot Michelin’s inspectors. Still, the approach makes him shortchange the food. Unlike on ER, here we actually do want to see the cuts of meat. The dishes are designed by master chefs Marcus Wareing and Mario Batali and lovingly photographed by cinematographer Adriano Goldman, and too often Wells cuts away before we can fully appreciate them. Sometimes he lingers on the right thing, like with the ganache-covered cake that Adam blows gold dust over or the dome-shaped birthday cake that he makes for Helene’s young daughter. Even so, you long for the food-friendly approach that Jon Favreau brought to Chef.

This supporting cast is enviable: Emma Thompson as a psychotherapist who informally diagnoses Adam with OCD, Uma Thurman as a food critic, Daniel Brühl as Adam’s boss, Omar Sy as his sous chef, Matthew Rhys as a former protégé-turned-enemy, and the inescapable Alicia Vikander as one of Adam’s exes. Amid all this star power, it’s Miller (lately stuck in thankless wife roles in Foxcatcher and American Sniper) who reminds us that she can act when she’s given the chance. Deglamorized, she gives a neat, low-key turn as a chef who understands Adam because she has a troubled past of her own.

Ultimately, this is the story of a man who seeks perfection in the things he makes because he can’t bear the imperfections in himself. The trouble there is that we had a better movie fitting that description just last week in Steve Jobs. That movie was clear-eyed enough to present its main character as a guy who would probably never change. This one feels like it has to redeem its hero all the way, with the love of a good woman and a modicum of peace even if he never gets that third Michelin star, and it feels synthetic. Burnt could have blazed a trail for more complicated movies about chefs, but it’s too flawed in its execution and presentation. Some other film will get that highest rating from me.