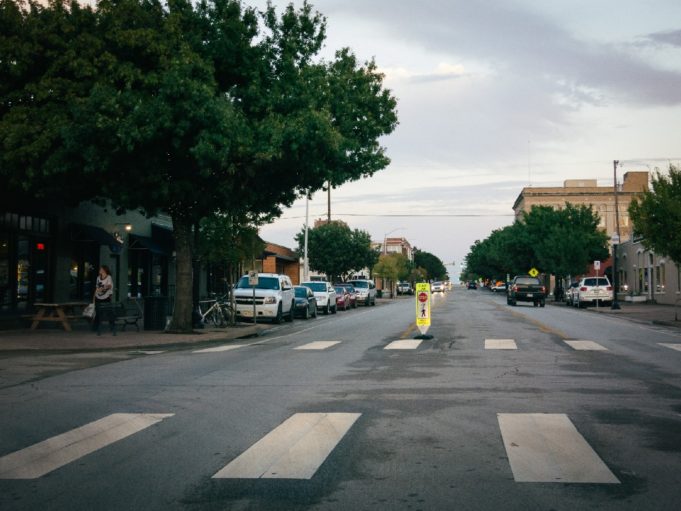 In a previous post, I started a journey into the concepts of urban design and planning by discussing the placement of buildings in relation to the street. For a brief recap: To make a place truly walkable, to make it safe and inviting to more than just car traffic, buildings should not be staked out behind huge parking lots. Rather, they should be brought right up to the street, along the sidewalk, with windows and doors and other such features oriented to pedestrians. Parking, if present, should be either on the street or hidden from view. Buildings up along the street without parking between pedestrians and their destinations helps create an “outdoor room” that makes people want to explore the area on foot.

We can’t talk about the importance of putting buildings up along the street, though, without talking about the quality and design of the streets themselves.

In the sort of car-oriented suburban design that blew up across the United States following World War II, street design has been increasingly dominated by the desire of traffic engineers to make car traffic move as fast and as interruption-free as possible. They even have a term for this: “level of service,” graded like a school report card. A street gets an “A” if cars can travel fast without stopping.

This mindset has shaped the form of streets in the post-war era. It leads to streets being designed to be far wider and with more lanes that is truly necessary. Sidewalks are tiny or nonexistent. Any “obstacles” like trees, pedestrian lighting, parked cars, and buildings are removed. Turns become large and sweeping so that cars don’t have to slow down. And the interconnected street grid of the city becomes the dendritic, meandering, disconnected pattern of suburbia’s arterial streets and cul-de-sacs.

A consequence of this obsession with traffic flow has been the creation of endless miles of streets on which no human being would ever want to spend time.

When a street is wide and features multiple lanes, that size discourages people from walking along it. The higher speed of wider streets makes people uncomfortable. The huge distances make it harder and less safe to walk from one side to the other, while also moving destinations farther apart.

The obstacles that traffic engineers are keen to remove –– things like trees, lights, benches, and street parking –– are, to the pedestrian, important quality-of-life improvements. Street trees, located along the curb between the street and the buildings lining it, slow traffic, and serve as an important physical and psychological barrier between people and traffic, making them feel safer and more secure. Parked cars in on-street parking bays serve the same effect.

The large-radius sweeping turns of car-oriented streets further discourages walking compared to the more squared-off right-angle turns of the city. Not only do the sweeping turns encourage cars to maintain high speed, but they also increase the distance pedestrians must brave to cross the street. In pedestrian-friendly street design, turns are squared off to calm traffic and shorten crossing distances. In the most walking-focused environments, intersections feature “bulb-outs,” extensions of the sidewalk that shorten crossing distances (you can see these in Fort Worth on Magnolia Avenue, for example).

Even the basic layout of streets –– a twisting soup of arterials and collectors and cul-de-sacs versus an interconnected grid –– serves to influence pedestrian activity. The suburban street network features few connections, almost no alternate routes, and very little choice. There is mostly only one way in or out of a place. In the city, the interconnected street grid gives users multiple route options, and thus more choice. A person walking in the city could go down the side street, past the neighborhood park, or along the main street’s shops and cafes, and have multiple ways to get to and from each, whereas a potential pedestrian in suburbia often has to go far out of his or her way to walk from home to work or retail destinations due to the winding, disconnected street network.

As a result of the interplay between street design and pedestrian traffic, it is ironically the worst streets that get the highest grade from traffic engineers –– the least appealing places for human beings. In the interest of speeding car traffic, we sacrifice the human foot traffic that makes walkable places work. And those car-dominated streets have a nasty habit of winding up congested and dysfunctional anyway, as a consequence of “induced demand” –– the tendency of usage to swell to fill capacity. The car-oriented streets wind up being more ruined by congestion than their walkable counterparts –– instead of traffic congestion with two lanes, you wind up with traffic congestion with six, or eight, or ten lanes.

It’s in the city’s best interests, if we want to encourage walkability, to re-tame our city streets from cars and redesign them for human beings –– and to change the design of our ever-sprawling exurban areas to use the principles of walkability as well.