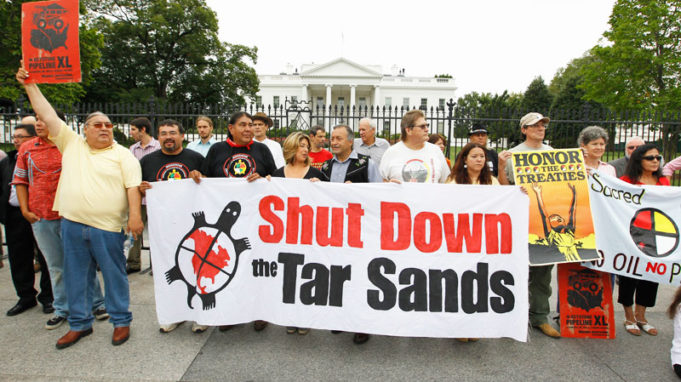 On Friday, Nov. 6, President Obama gave the word that the Keystone XL pipeline, intended to carry tar sands bitumen from Alberta, Canada to Cushing, OK, would not be approved. In announcing the decision, President Obama, speaking from the Roosevelt Room of the White House said simply: “The State Department has decided that the Keystone XL pipeline would not serve the national interest of the United States. I agree with that decision.”

The pipeline would have carried the bitumen from Canada to Cushing, then on to Houston’s refineries and from there to Port Arthur, a tax-free zone, for shipment to China and other foreign ports. TransCanada, the energy giant, has acknowledged that the tar sands bitumen was slated for overseas markets, and that once the pipeline was built would produce only 35 or 40 permanent jobs in the U.S.

Environmentalists around the country and world cheered the pipeline rejection because of the dangers the pipeline. The material is almost impossible to clean up and the line would have passed over the Ogallala aquifer, which supplies fresh water for the breadbasket of the U.S. Others cheered because the pipeline would have given a foreign company the right of eminent domain for profit. Still others cheered the line’s rejection because the pipe would have produced nothing—fuel or jobs or taxes—for the U.S., while TransCanada and the Koch brothers, who have a potential $100 billion windfall invested in Canadian tar sands, would have made enormous amounts of money at the risk of U.S. taxpayers who would be responsible for any spill clean up.

Despite all those drawbacks with no upside, Speaker of the House, Paul Ryan called the decision by the State Department and President Obama “sickening”.

Two days prior to Obama’s announcement, TransCanada had asked that their request for the pipeline permit be suspended, which would have allowed them to activate it at a future date. Secretary of State John Kerry denied that request. That denial is significant: it means that if TransCanada decides to pursue the Keystone XL in the future, it will be starting from ground zero in the permitting process.