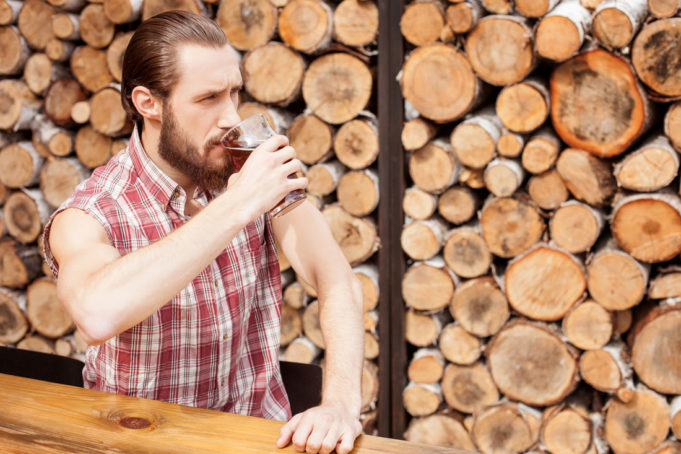 What is it about beer and wine snobs that irritates me so? I mean, I’m a wine person, but I don’t stick my whole face into a glass of vino and sniff like I’m huffing paint. I don’t swirl the juice around, raise it above my head like Simba, and gaze through the thin glass like it holds the secrets to the universe. I find craft beer aficionados even worse, mainly because I hate beards and ironic t-shirts. But places that specialize in fancy suds are opening all of the time.

Despite my strong feelings, I tried to keep an open mind about Dagwood’s Grinders and Growlers (1736 Mall Cir., 817-570-7924), a new craft beer beacon/gourmet sandwich shop recently opened near Ridgmar Mall. The eatery was the first part of a three-part drama from super-ambitious Chef David Hollister, formerly of Yucatan Taco Stand and Gas Monkey Bar N’ Grill. His biz team has already opened two other Fort Worth restaurant concepts: Dagwood’s Fire Tap Grill in the Foch Street warehouse near the West 7th Development and Common Ground Grill & Tap near TCU.

Hollister has the look of a typical beer-centric chef: Full beard? Check. Sleeve tattoo? Check. Barrel chest? Check. (When did every male chef decide on the tattooed lumberjack look?)

I haven’t been anywhere near Ridgmar Mall since my days at Arlington Heights, when my fellow upper classmen would infest the food court everyday at lunch –– it was either that or Under the Tower. There’s a yoga place near Dagwood’s, and the Naval Air Station Joint Reserve Base is just a mortar shot away. On my recent lunchtime visit, the tiny dining room was packed with a hilarious mix of men in military uniforms and women in yoga pants. Ah, West Fort Worth.

I started out with the beer-cheese soup ($2.50), an intensely rich, bold yellow sludge. All I could taste was the garnish of way too much bacon, goat cheese, and thyme.

The place’s namesake sandwich, however, was a different story. The Dagwood ($12) was the kind of gut-punch that Popeye would deliver after eating spinach turned his fist into an anvil. The two-hand monster packed silken, tender wood-charred akaushi beef tips, thick-cut, fresh-tasting beefsteak tomatoes, creamy blue cheese, crispy leeks, and a fried hen egg (as opposed to a Velociraptor egg?), stuffed in between wood-grilled sourdough bread slices that were slathered in a fragrant smoked Rosemary aioli, with a bone marrow au jus on the side for dipping.

My guest’s Jive Turkey ($7) didn’t have the same wow factor. Though it was a tryptophan coma-inducing sandwich, it also had a beautiful balance of nuanced flavors. The moist turkey breast was drenched in a spicy peppercorn dill ranch sauce, with arugula, tomato, avocado, poblano pepper, red onion, and smoked cheddar, served inside toasted sourdough.

I didn’t partake of any beer, but a lot of people were day-drinking. And, I should admit, no one in the dining room was examining his or her beer like it was the antidote to a rare beard disorder. I don’t imagine I’ll come around on beer snobbery anytime soon, but at least I’ve found a place where I can co-exist with those people.