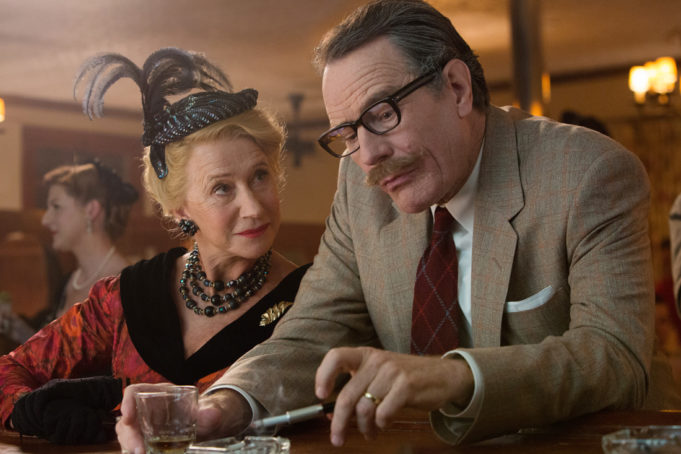 Dalton Trumbo was, to use an overexposed word, a hero. His life may never have been in grave peril, but after the Oscar-winning screenwriter was blacklisted from Hollywood by the House Un-American Activities Committee, he continued to write scripts in secret. At a significant emotional and financial cost to himself and his family, he helped break the ban by standing up to the thought police. There’s a terrific tragic story with a happy ending to be found in his life and career. The director of Meet the Fockers turns out not to be the guy to find it, which is unfortunate, because he’s in charge of the entertaining but inconsequential biopic Trumbo.

Bryan Cranston plays the man who is Hollywood’s highest-paid screenwriter until 1947, when the studios cave to the U.S. government’s anti-Communist hysteria and fire him and nine other card-carrying writers. After a prison term and exchanging his mansion for far more modest housing, Dalton keeps writing on the sly with the help of his wife Cleo (Diane Lane), their three kids, two brothers who produce low-budget movies (John Goodman and Stephen Root), and a network of sympathizers willing to assume credit for his work. Fueled by Scotch, cigarettes, and benzedrine, he churns out crap to pay the bills but also watches his scripts for Roman Holiday and The Brave One win Oscars. It’s not until 1960, when Kirk Douglas (Dean O’Gorman) drops by his house and asks him to rewrite the script for Spartacus that Dalton gets to use his own name again.

Unquestionably, the best thing here is the cast. Cranston has a grand old time playing the hero as an owlish trickster who, rather than stand up and fight a losing battle, delights in sneaking around and putting one over on the guardians of correctness. Acting as a more than capable foil is Louis C.K. as a fellow writer who’s always on hand to deflate Dalton’s self-satisfied rhetoric. (“Do you have to say everything like it’s going to be chiseled into a rock?”) Christian Berkel gets a punchy cameo as the fastidious German director Otto Preminger. Flashiest of all is Helen Mirren as Hedda Hopper, the flamboyant gossip columnist and self-appointed anti-Communist scourge. This is a rare turn by Mirren as a despicable villain, and she has so much fun with it that you wish she would do it more often.

Despite all this, the movie loses its momentum too often. Trumbo wants to be a statement on the value of standing on principle at a time when everybody else is running scared, and given the current political climate, it could have been incredibly timely. But it doesn’t have the power.