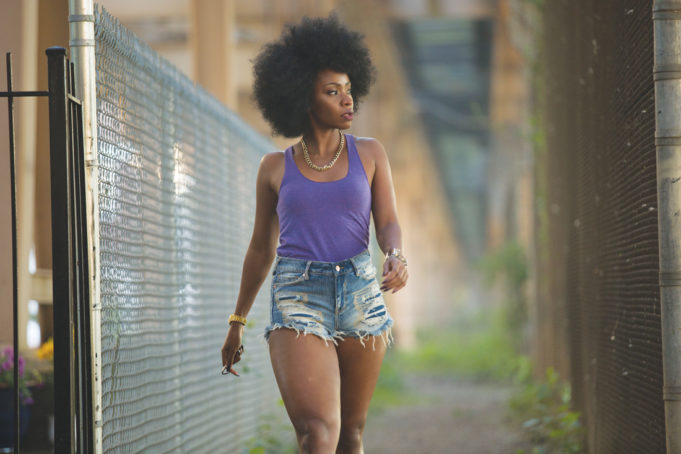 Satire has been an element of Spike Lee’s filmmaking since the beginning. Caricatures, heightened reality, and subversive jokes aimed at all manner of targets have popped up all through his early films like She’s Gotta Have It, School Daze, and Do the Right Thing and continued in a more subtle vein like in that video-game parody in Inside Man. His comic legacy is easy to find in the larger culture. We probably wouldn’t have the college satire of Dear White People or the sketches of Chappelle’s Show or Key & Peele without Spike Lee.

Yet the fact remains that when Lee tries to do an out-and-out satirical film, the results are often gruesome. He has trouble balancing laughs with his serious points (like in large swaths of Bamboozled), and sometimes his comic touch goes entirely out the window (like in She Hate Me). His latest film Chi-Raq is a riff on gang violence based on the ancient Greek comedy Lysistrata and performed mostly in rhyming couplets, and you could be forgiven for approaching it with trepidation. There’s every reason on paper why this should fail. It’s something of a miracle that this uneven film works as well as it does.

After a flat opening featuring grim statistics, the proceedings explode into life during a concert by Chi-Raq (Nick Cannon), a Chicago gangsta who raps to a club full of fans about his love for his Spartan street gang and vows to shoot Cyclops (Wesley Snipes), the one-eyed leader of the rival Trojans. Predictably, some Trojans in the crowd start shooting up the place. The carnage continues unabated until a little girl is killed in the street one day, and her grieving mother (Jennifer Hudson) curses Chi-Raq’s girlfriend Lysistrata (Teyonah Parris) for her part in the war. Chastened, Lysistrata organizes a get-together with the Trojan women and leads a sex strike, denying the men sex until they call an end to the bloodshed and rallying her women with a cry of, “No peace, no pussy!”

Lee’s knack for music and movement makes that opening rap concert intoxicating, as the women in the front row move in unison with glow sticks in their hands. The rhymes in the script by Lee and Kevin Willmott are meant to mimic rap, and while some of them land with a thud, others land with real force. One beleaguered resident (Angela Bassett) remembers Sandy Hook and says, “When they kill white babies, and things don’t change / You know black lives are way out of range.”

Bassett is one of the luminaries in this formidable cast, which also features Samuel L. Jackson as a pimped-out Greek chorus dropping truth about Aristophanes. Dave Chappelle turns up as a strip club owner who’s suddenly without strippers, Steve Harris gives unholy glee to the part of a silly men’s rights activist, and Isiah Whitlock Jr. turns up to deliver an extra-long “Sheee-it.” More seriously, John Cusack shows more energy than he has in the last 10 years as a hippie priest who delivers a fiery eulogy for the murdered girl, apportioning blame to the NRA and the politicians without absolving the African-American community itself. This monologue lasts a full eight minutes, and Cusack is spellbinding. At the center of it all is Parris, who’s commanding here in a way that she wasn’t in Dear White People and makes herself look much taller than she is. (The stiletto heels and the huge Afro help.)

Focus has never been Spike Lee’s strong suit. He’s always finding things that interest him at the margins of his stories. In his best films, he makes us interested in them, but here and elsewhere, he just leads us up blind alleys, like the scenes with the predatory insurance salesman (Roger Guenveur Smith) or the uptight police commissioner (Harry J. Lennix). The scene with Lysistrata sexually enticing an Obama-hating Army general (David Patrick Kelly) who wears Confederate flag underwear is a big misfire, and Lee doesn’t get as much humor as he could out of the increasingly frustrated men in this story or Lysistrata’s sex strike going global. In this age where white resentment seems to be everywhere, there’s plenty of targets for an African-American satirist and Lee seems lost about where to aim. I’m not worried about that, because with all the terrific African-American filmmakers working today, somebody’s going to get it right. In the meantime, Chi-Raq hits often enough to keep Spike Lee current with the times.