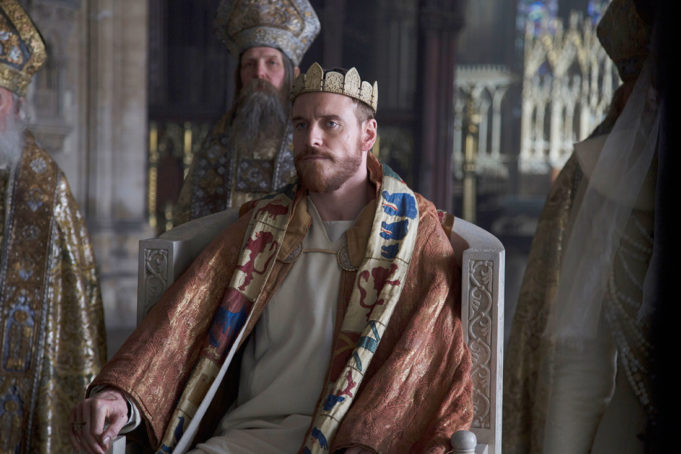 Some otherwise rational people think that there’s a curse over Shakespeare’s Macbeth, and one piece of evidence they have is that so many great actors have suffered critical and financial failure playing the Scottish usurper. I think there’s a simpler explanation for this than a curse: Macbeth is just a really hard role to play. How do you find a way into this character whose actions are driven by a prophecy delivered by three strange women and who at first seems controlled by his wife but then becomes a greater monster than she is? Without an actor who can solve this, the whole play fails, since Macbeth so thoroughly dominates the work that he’s in. Many great actors have been felled by this, and now it’s Michael Fassbender’s turn in the latest big-screen version of Macbeth.

Australian director Justin Kurzel keeps the action in medieval Scotland and plays up the contrast between the splendid Dunsinane Castle that Macbeth inherits and the wild, pagan countryside where encountering witches and ghosts doesn’t seem all that odd. He takes a few pages from Zack Snyder in the battle that opens the movie, but that’s in keeping with the spirit of this film that doesn’t stint on the blood and gore that accompanies Macbeth’s rise to power.

However, he never finds a rhythm for this, despite Macbeth being one of Shakespeare’s leanest and meanest tragedies. He cuts out the comic interlude with the drunken porter, which leaves references in the tragic part of the story dangling. The bit when the murdered Banquo (Paddy Considine) shows up at Macbeth’s banquet isn’t nearly as fearsome as it should be, nor are the executions of Lady Macduff (Elizabeth Debicki) and her children as horrible. Having Macbeth be haunted by the ghost of a young soldier (Scot Greenan) killed in his service is an interesting idea that goes nowhere.

Marion Cotillard does well enough by the part of Lady Macbeth during the early going when she’s urging her husband to kill King Duncan (David Thewlis), but her later mad scene is much less effective. As for Fassbender, he has one good demonic flash when he points a knife at his wife’s chest and says, “O, full of scorpions is my mind!” Elsewhere, he turns Macbeth into a mopey bore, and Shakespeare’s language (which is exceptionally vivid even for him in this play) fails to come to life in Fassbender’s delivery. Track down the 1978 British TV version of Macbeth that starred Ian McKellen if you want to see a great actor who has figured out this thorny role. This current movie is yet another adaptation that, despite some moments of skill and insight, manages to be forgettable.