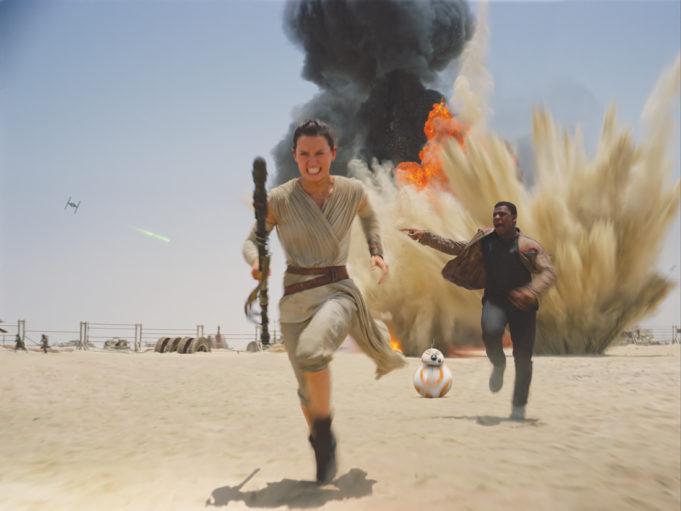 I think I’ve been resisting the Star Wars hype pretty well. While people around me have been holding their breath for the better part of a year waiting for Star Wars: The Force Awakens, my anticipation was cooled considerably by those sodden, bloated prequels that George Lucas made in the previous decade. The Christmastime release helped me approach this seventh installment as just another movie to see among the crush that comes upon me every December. Well, now I’ve seen it, and I daresay that this fresh new outing will disappoint far fewer fans of the epic than The Phantom Menace did.

The story picks up some decades after the events of The Return of the Jedi. The rebellion has fallen into disarray following the disappearance of Luke Skywalker (Mark Hamill), and the Empire has risen again under the name The First Order. The new political landscape brings three people together on a remote desert planet: Poe Dameron (Oscar Isaac), an ace pilot searching for Luke; Rey (Daisy Ridley), a local girl scrounging a living by scavenging spaceship parts; and an imperial stormtrooper (John Boyega) who deserts after being ordered to kill civilians and who has no proper name but is christened “Finn” by Poe. He and Rey escape the planet by stealing a familiar-looking spaceship, bringing them into contact with the old smuggler Han Solo (Harrison Ford), who happens to have a deep personal connection with Kylo Ren (Adam Driver), the Jedi-trained First Order enforcer who’s hunting them all down.

This is in the hands of J.J. Abrams, who establishes himself as a first-rate imitator with this film. Maybe that sounds like a backhanded compliment, but his ability to absorb other creators’ styles makes him perfect for carrying on a series like this, which renders him invaluable in today’s Hollywood. In Star Trek, he picked up the aesthetic and core values of Gene Roddenberry’s TV show while vastly improving the quality of the writing and characterization. Here, he slips easily into Lucas’ narrative rhythms, which are leisurely by contemporary standards, and restores the breezy sense of fun that made the original trilogy such a success. Helping greatly with that is Ford, who looks energized back in his old role, exploding hilariously in disbelief when Finn mistakes what The Force is and whipping one-liners at the youngsters. (Oh, yeah, the dialogue here is much better than George Lucas’, too.) The reunion between the estranged Han and Leia Organa (Carrie Fisher), who now prefers to be addressed as “General” rather than “Princess,” has the proper weight to it.

The decision by Abrams and his co-writers (one of whom is Lawrence Kasdan, who worked on The Empire Strikes Back and Return of the Jedi) to restore the old status quo with the good guys fighting as plucky underdogs isn’t the most inspired one. There’s still too much airy philosophizing about The Force here, though the problem is nowhere near as severe as it was in the prequels. We’re supposed to take Rey as an unschooled natural talent when it comes to Jedi skills, but she’s so competent here that she verges on superhero status — how does she think to do the Jedi mind trick when she’s in a jam, let alone pull it off successfully the first time she tries it?

Still, she wields Luke’s lightsaber in a spectacular forest duel against Ren, with their sabers cutting down trees and melting the snow, and I’m not sure I remember a woman handling a weapon like that in any of Lucas’ films. (Hand it to the old master: This many decades after he first imagined them, lightsabers are still really cool weapons.) Isaac gives his role a swashbuckling quality that recalls Ford in his old days, and Driver helps make the easily angered Ren a more layered tragic villain than Anakin Skywalker managed to be in the prequels. There are plenty of callbacks for fans of the old series, but they don’t intrude on the momentum of this adventure saga, which clocks in at a relatively lean 135 minutes. With all of this, J.J. Abrams does more than just deliver one of the better Hollywood blockbusters of the year. He carries on George Lucas’ creative vision better than Lucas himself could have ever done. The Force, it seems, is with him.