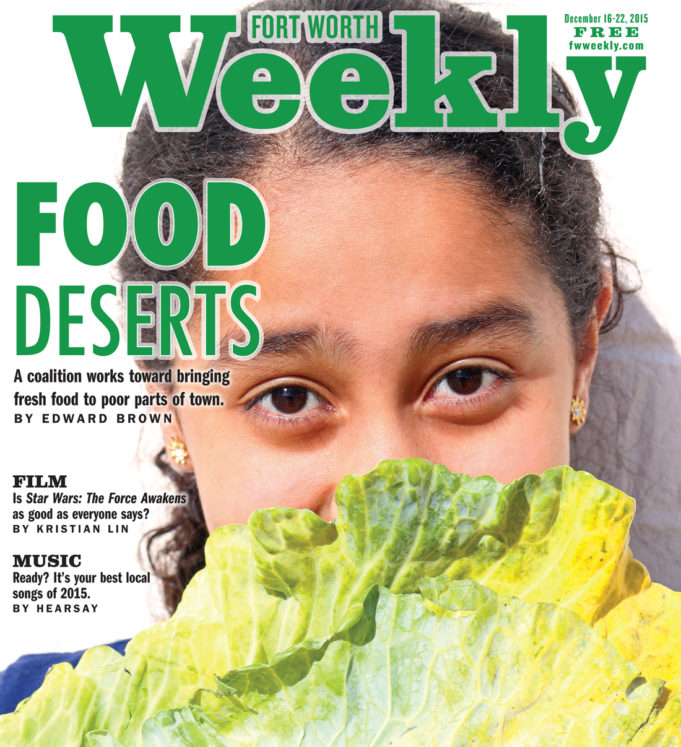 The scene looked nothing like the picturesque images plastered on billboards by the Fort Worth Convention & Visitors Bureau. Several dozen people with IDs in hand were in line in an open-air facility near a row of retail stores on Cherry Street in West Fort Worth. As each person’s name was checked off, he or she was given a grocery cart and two cardboard boxes. The men, women, and children were stocking up on donated fruits, vegetables, and poultry.

Tarrant Area Food Bank directors didn’t choose White Settlement by accident. The drop off point lies within a 16-square-mile food desert, a designation by the U.S. Department of Agriculture for any rural or urban area whose residents don’t have easy access to “fresh, healthy, and affordable food.”

A middle-aged African-American woman who works full-time as a security guard, Ava Lane said the donations fill a void. Even if families have money, she said, their community might not have a grocery store, forcing them to travel –– often by bus –– miles away.

“My son has seven kids,” she said. “So I go to these food banks because he lacks fresh food. The babies need to eat the right kinds of food.”

Any excess she has goes to her elderly neighbors who no longer drive, she added.

Christi Durko, a volunteer from West Freeway Church of Christ who was signing in Lane and others, said the produce helps replace the processed foods that have already created public health problems.

“Many of these people have diabetes,” she said. “A lot of the foodstuffs that lower-income people can afford are sugar-heavy. These people want to get healthy.”

The Food Bank says an estimated 280,000 Fort Worthians live in a food desert. The demographics trend low-income, meaning many of the folks here are faced with two unsettling choices: take a bus several miles for a few bags of produce or purchase largely processed foods from convenience stores. The first option is time prohibitive, and the second option has significant health ramifications for a population whose members largely cannot afford adequate health insurance.

Highly-processed, packaged food, she said, is generally loaded with fat, sugar, salt, and calories. In addition to obesity, these elements can often lead to “diabetes and cardiovascular disease, including heart attacks and strokes.”

The focus is driven partly by a 2012 USDA study that systematically mapped Fort Worth’s food-deprived areas. Nonprofits like Tarrant Area Food Bank have been in the thick of it for decades, visiting local food-deprived zones and handing out surplus produce donated from supermarkets.

A recent boost in the effort came last year with the arrival of Blue Zones Projects, a national program offered by Healthways, itself a for-profit wellness company headquartered in Franklin, Tenn. Blue Zones’ largest funder is Texas Health Resources, a nonprofit that operates a network of hospitals and care facilities in North Texas. Blue Zones has made a four-year commitment to improve health outcomes here through health and active living projects.

The Blue Zones’ signature baby blue logo and hookish mottos have many city officials and restaurant owners clamoring over one another to appear on the healthy-eating bandwagon. The Blue Zones folks oversee several projects, including the coveted bestowment of Blue Zones certification, a bragging right of sorts for businesses that can fulfill a checklist of healthy-eating recommendations –– one checkmark requires eliminating free refills of sugary drinks, for example. But it’s the group’s proposed changes to Fort Worth policy regarding mobile produce carts and community gardens that may have the biggest impact on Fort Worth’s food deserts.

Several local nonprofits are collaborating directly or in concert with Blue Zones’ efforts to address complex problems, from a lack in public transportation to restrictive city ordinances, disenfranchised local farmers, and food waste.

“We assume everybody is mobile with a car and always has gas money,” said Barbara Ewan, the Food Bank’s director of food programs. “There are a lot of people who have to work really hard to get healthy food.”

Ewen said the mobile pantry program in White Settlement and elsewhere allows her nonprofit to funnel donated food directly into the deserts. The contributions consist mostly of what’s missing in low-income neighborhoods — fresh fruits and vegetables. From her office just north of West 7th Street, she keeps close tabs on the ever-changing boundaries of low-access food areas.

According to the environmental research blog Grist, Fort Worth ranked 36th out of the 51 largest cities in the U.S in 2014. Whereas 72 percent of New York City residents are within a five-minute walk to fresh food, only 8 percent of Fort Worthians are.

“There is an economic cost to not eating well that everybody should be interested in because we end up paying for it through the healthcare system,” Ewen said. “The rise of diabetes and heart problems are tied to nutrition. There is a drag on society when people are chronically sick.”

The Food Bank has a “War Room”: a wall with several maps pinned to it. Ewen singled out a small red square in south Fort Worth, just west of I-35.

“It’s moved,” she said. “Either the poverty rate has gone up, or stores have closed.”

Poverty, race, single parents — all of the most deleterious factors in play in low-income neighborhoods — are defining features of food deserts, she said.