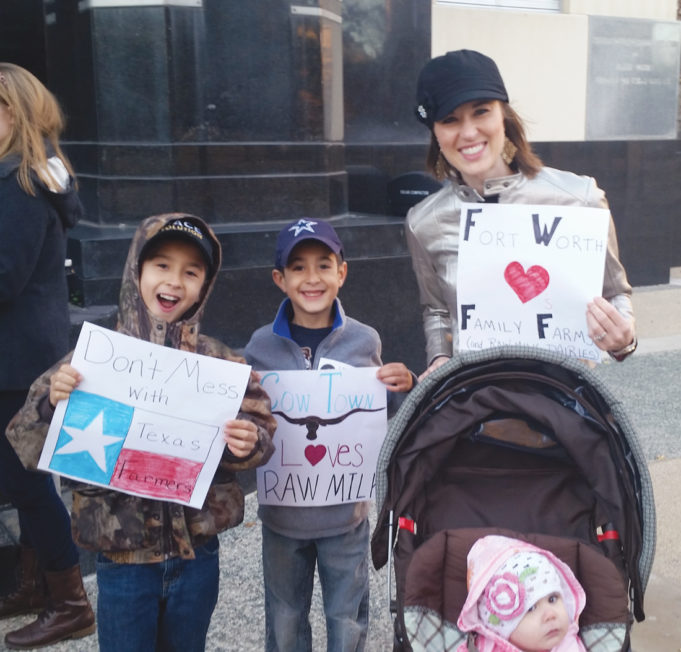 Outside a municipal courthouse downtown last week, a dozen or so protesters held signs that read, “Cowtown loves raw milk” and “Don’t mess with Texas farmers.” A lot of the protestors wore stickers emblazoned with “I support Rosey Ridge,” the nine-year-old Hill County farm whose owner, Eldon Hooley, has been accused of selling unpasteurized milk within city limits.

Protestor Jenna Blevins believes the case is about more than just a kind of liquid.

Inside the courtroom was much less exciting. Hooley supporters were greeted by drab brown walls and backbreaking pews. It took four hours for the judge to get around to the rancher’s case, and then the session dragged on into the late hours of the next morning. The verdict? Guilty

Hooley must now pay a $1,500 fine. He is going to appeal, a process that could last well into 2016. In the meantime, he is allowed to continue his farming as usual as long as his milk is no longer distributed in Fort Worth.

Hooley’s path to the courtroom began last year, when he was notified by Fort Worth’s Consumer Health Department that he was in violation of a 2014 ordinance that prohibits the distribution of unpasteurized milk within city limits.

The Centers for Disease Control and Prevention, Fort Worth’s health department, and Texas Department of State Health Services all take the stance that raw milk is a potentially hazardous food because if untreated the dairy product can become an ideal environment for bacteria and other pathogens.

Cleburne’s Campbell’s Classic Dairy, one of several North Texas farms affected by Fort Worth’s 2014 ordinance, has stopped selling raw milk due to frustration with the law and with aggressive state inspectors. Owner Regina Campbell said the ordinance cut into her business, frustrating her Fort Worth customers, who were forced to make the commute to Cleburne on individual bases.

The sale of raw milk in Fort Worth retail stores has been illegal since the city adopted the state’s position in 2000, but until the 2014 law, Hooley’s patrons, many of whom belong to food co-ops, could distribute his milk in town.

It is legal in Texas to purchase raw milk directly from farms that have a special permit.

Hooley pleaded not guilty, noting that he has no control over what consumers do with his product after it is sold.

The trial is only the most recent turn in a saga that goes back several years. Hooley’s supporters claim the case is part of a witch hunt by state and city officials to shut down Rosey Ridge, the main source of income for Hooley, his wife Lisa, and their six children.

DePaula rebuffs the accusations. Fort Worth, he said, is simply being consistent with the official stance of the state’s health department.

Members of groups like the Texas Medical Association have testified in the past that pasteurization is fundamental to public health –– cows’ udders carry potentially dangerous diseases. The association’s position, said TMA media relations director Pam Udall, is that infants, people with immunity-compromising conditions, pregnant women, and the elderly are particularly at risk.

Mary Kelleher is almost as upset as Hooley. The Tarrant Regional Water District board member has witnessed and reported significant code violations in Fort Worth that pose grave public health risks, but, she said, the sale and/or distribution of raw milk has never been one of them.

“I think it’s a sad day when our city officials are more concerned about raw milk than other more serious health risks that exist,” she said.

Examples? Just a few months ago, Kelleher said she notified city officials that a local developer had built a concrete plant that she claims emits large amounts of greenhouse gases near residents. Over the years, she has pointed out numerous construction projects within Fort Worth’s flood zones and elsewhere that get “a free pass” from city officials.

Why? Because the developers are personal friends of city officials, Kelleher said, and because ordinary citizens like Hooley are held to a higher standard.

Texas raw milk consumers are more than a handful of fanatics. Judith McGeary, founder of Farm and Ranch Freedom Alliance, a national nonprofit that supports independent farmers, estimates the number of consumers of raw milk in Texas to be near 750,000.

Kay Singleton, a longtime resident of the Arlington Heights area, spoke to the Weekly last year about the harassment that she and others have endured at the hands of city officials over raw milk. Code compliance staffers routinely hassled anyone who dropped off raw milk at her residence, she said.

Hooley supporters say the directors at the state health department have made several unwarranted inspections. On one occasion, Hooley alleges that his Grade A milk permit was suspended without due cause.

After Fort Worth City Council passed the raw milk ordinance last summer, many raw milk fans were scared off.

“Nobody can afford the $2,000 fine,” said Kayla Wenzel, a Fort Worth mother and raw milk enthusiast.

Wenzel and her raw milk-loving friends have acquiesced and now meet outside Fort Worth to collect and distribute raw milk through co-ops.

David G. Cox, the lawyer assigned to Hooley by the Farm-to-Consumer Legal Defense Fund, a nonprofit that protects consumer access to raw milk and nutrient-dense foods, said the city’s claims are vague and that no one has ever been clear about why charges were brought against his client.

There was more at stake than a fine, Hooley said before the court proceedings. To say a farmer is liable for how a product is used after it is sold is unfair and unreasonable.

“If Mr. Hooley makes someone sick, then he should be liable,” he said. “But he shouldn’t be responsible for the actions of the co-ops, especially when the state of Texas [allows the consumption of raw milk by private individuals]. I’m defending Mr. Hooley because it makes sense. [Hooley] is engaged in a sustainable agricultural practice, with healthy products and is making those products directly available to consumers. We think that’s a model that should be promoted. It’s better for everyone. It’s better for the environment, economy, farmer, and the consumers.”

“While I don’t drink raw milk, I certainly support the sustainable farming practicing of others and the entrepreneurial spirit and free-market principles,” he said. “All taxpayers should be upset that officials are focusing on an issue like this when we have so many other issues to deal with.”

DePaula said there has been a lot of “public misunderstanding” about the case.

“This case was about food safety,” he said. “Fort Worth is not trying to get in anybody’s refrigerator. The intent is to follow state policy and keep our food safe.”

Have there been any recorded cases of raw milk poisoning in Fort Worth?

“Not that I know of,” DePaula said.

Hooley was undaunted by the ruling. He said he was touched by the tremendous support.

“It was our 25th wedding anniversary yesterday, and we always like to do something different each year,” he said. “Spending the day in court is the most different thing we’ve ever done. We have so much to be thankful for. I still have a wonderful wife and family, and God doesn’t allow us to be tried for more than we can take.”