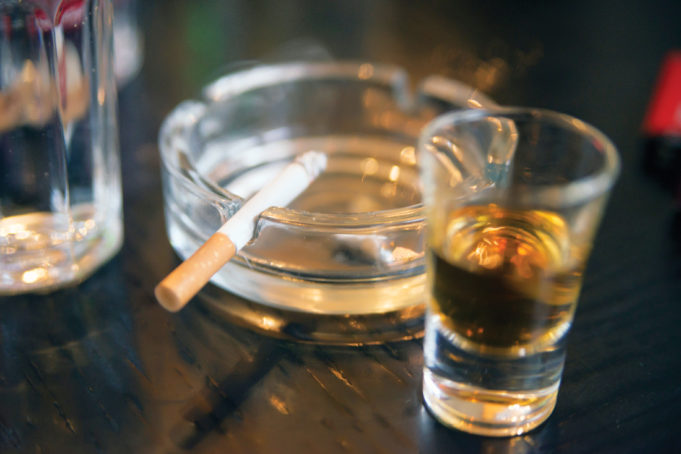 When I was thinking about all the places I wrote about in 2015 (this was after I’d written last week’s Last Call), I realized that I’ve had a comparatively tame year of roaming around the 817’s drinking scene. You’d think that “comparatively tame” might imply that I’ve been mellowing out. It’s true that I go out less frequently than I might have, say, even a year ago, but it’s also true that it hasn’t even been three weeks since the last time I puked in a parking lot. Technically, it was a gutter, and, frankly, what’s one more Jameson shot when you’ve already had five (more than you should have)? But anyway, when I went through the old columns, it seemed like I ran into far fewer dive-bar weirdos in 2015 than I used to. I feel like I went to just as many hole-in-the-walls, but maybe day-drunk degenerates just blend into my perception better. Perhaps I’ve been in enough crummy bars that the people who drink in them just seem normal.

Normal, obviously, is relative. In March, I took a date to the Basement Bar for drinks. She sat at the bar, I squeezed into the space between her barstool and some 400-pound sack of shit gleefully dry humping this lot lizard seated on his lap. He and she were having a grand old time, and though the bar was tightly packed, nobody seemed to take notice. The first few times I felt this guy’s back bump into mine, I didn’t think much of it –– I even laughed out loud the third or fourth time it happened. The next time he bumped into me, I figured he’d heard me laughing and was joking around. Boy was I mistaken. My date leaned in close to whisper in my ear. “We need to move right now,” she said. “That guy is going to kill you.” And sure enough, when I got up, he swiveled in his seat to face me so that I might see the rage manifested beneath his sweaty, beetled brow. Can jowls be hateful? Because this man’s looked like they were ready to murder me, my family, and probably my entire graduating class, not just from my high school, but from the year 1996. I moved right the fuck on. Months later, when I replayed the tape in my brain, it occurred to me that that interaction was probably de rigueur for that guy. So I thought, eh, I guess that’s normal. When you go to the Stockyards, don’t be surprised if someone wants to beat your ass.

Years ago, I used to make a big deal (especially in print) about how on this or that night, some friends and I stepped out to a bar’s patio or the alley behind to smoke weed. But now, in 2015, this also feels normal. Granted, I don’t know a single bar owner that explicitly condones this, and it’s not like Fort Worth has suddenly turned into Amsterdam or Barcelona. I just think fewer people care or even take notice when they happen upon a circle of friends passing a joint, pipe, or pen around.

And speaking of smoking, another rarity that’s becoming increasingly mundane: bars that won’t let you light up indoors. Oh sure, Fort Worth will probably go without a smoking ban for years and years and years, but more bars are trying to clear their air –– when I sat at Baker Street Pub for an hour and wondered why nobody had asked for an ashtray, I realized that smoke-free bars are a trend that doesn’t seem to be abating. So that’s pretty routine now, too.

I can’t say I mind too much. When shady Stockyards characters and casually public cannabis usage are stuff you encounter on the reg, you’re probably doing better than those who never go anywhere. I hope 2016 brings me plenty of weird stuff to get bored of. –– Steve Steward