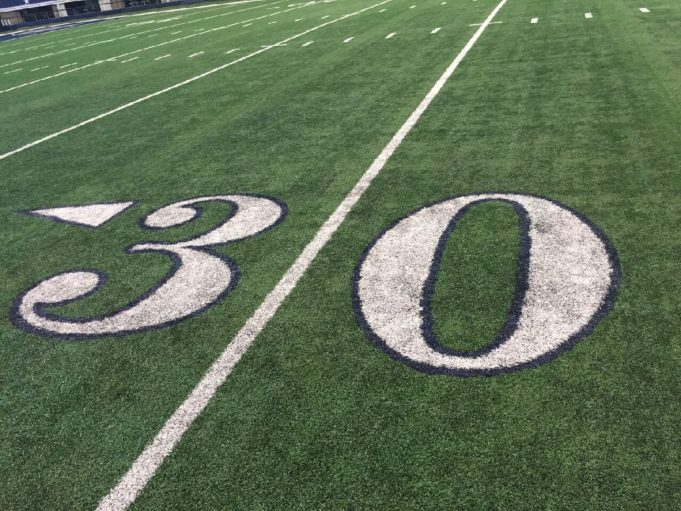 Football is different from other sports.

The ball’s not round, certain players aren’t allowed to touch said ball, and a game can fill 100,000 seat stadiums once a week with fans wearing colors not found in nature.

Should conference alignments reflect its unique character? A basketball game last week served as a reminder of how football’s singularity affects the rest of the collegiate sports world.

In men’s hoops last Monday, the West Virginia University Mountaineers visited their non-historical rival, the Texas Christian Horned Frogs. The ‘Eers traveled roughly a thousand miles to the game, just as their baseball, swimming & diving, women’s basketball, and volleyball teams did or will do this year. A number of TCU’s teams visit Morgantown, too. Why go some 1600 kilometers to play these games? It’s because football is different.

Football always has been the alpha male in the nation’s university environment. There was once a College Football Association to negotiate big schools’ TV contracts in the sport. No such equivalent existed for golf or cross country. Teddy Roosevelt never held a summit to explore making the pole vault safer.

Football has always gotten special treatment, and it’s easy to understand why. The gridiron game is the most popular spectator sport in college athletics. Reputations, egos, and huge dollars depend on it. Those dollars, in fact, drive much of athletic departments’ decision-making. Football’s large roster size and marketing needs, among other things, make it an expensive sport in which to field a team, especially at the FBS level. Choices get made, then with an eye to maximizing the revenue the football program generates.

Certainly any purveyor of sporting contests aims to generate maximal economic returns. Football plays a unique role in college athletics, however, because it is often relied upon to create enough revenue to pay not only for its own costs but also those of sports which do not generate enough funds from sales of tickets, broadcast rights, sponsorships, and “Beat Bama” shirts, plus donor contributions, to pay for themselves. Men’s basketball and, on rare occasions, other sports at certain schools occasionally pay for themselves as well.

There’s not necessarily anything wrong with this arrangement. Fans are certainly entitled to prefer watching one sport over another. If the monies they contribute and facilitate indirectly (like sponsorship and broadcast rights sales) allow students proficient in sports besides the fans’ favored one to realize the benefits intercollegiate athletics provide, that seems a reasonably happy result.

Not all schools break even on their athletic programs, of course. The Washington Post looked the public universities (because government institutions must make the data available) in the Power Five conferences. 28 of the 48 schools they examined lost money on athletics. A USA TODAY study found that more than 200 Division I public institutions didn’t bring in enough income to cover athletic operating costs. In cases where departments don’t fund themselves, student fees tend to make up the difference.

The Post noted that proponents of intercollegiate athletics cite benefits beyond athletic budgets, including publicity that increases applications. Athletic participation certainly also provides benefits to students involved in both the sports themselves and ancillary activities like band, student radio, and valet parking for suiteholders.

It’s an inexact calculation as to whether the costs of intercollegiate athletics outweigh the benefits, and we won’t get into that debate here. But given that even the biggest football schools often don’t pay their own costs, if we could come up with a way for them to run more efficiently, we should take a look at it. That would seem especially important given that many of the institutions in question are public ones, with taxpayers ultimately on the hook for yearly cost overruns plus the infrastructure student-athletes utilize outside the athletic sphere. Given the prevalence of government student aid, that likely holds true for most private institutions as well, since those loans and grants might pay for student athletic fees that subsidize unprofitable athletic departments.

Which brings us back to TCU versus West Virginia (a 95-87 WVU win). They played each other Monday because they’re in the same conference. They’re both Big XII members in large part because of football. When the conference had openings, would either school have gotten in if they didn’t bring national football profiles? No way. Football pedigree clearly factored in the decision more than, say, traditional rivalry or geographic proximity.

Student-athletes are conceivably supposed to be the most important thing about college athletics. The lessons they learn from playing are a valuable part of their preparation for life. They aim to put in enough time to get the benefits of their sport(s), but not so many hours that their commitment hurts other academic and extracurricular performances.

Football, as previously noted, is different from other sports. You play once a week, usually on Saturdays. Whether you play at WVU or Maine Tech or the Sorbonne, your travel time isn’t too different. Other sports play more frequently and often on school days. The more long road trips students endure, the more classes they miss.

Likewise, a half-dozen lengthy football road trips may not cost that much, and may well be worth the cost if you consider them vital to your gridiron success. Multiple long journeys from baseball, softball, basketball, and the rest of your department’s teams, however, quickly add much larger costs. For the unprofitable schools mentioned earlier, those costs get covered by state resources (like tuition collection, endowment depletion, property tax revenue) that could be directed elsewhere.

A pair of state schools in Texas also field teams that travel to West Virginia annually. They (and their fans) used to be able to travel the much-shorter distances to College Station, Texas for games of similar caliber. However, the public Texas A&M University made a football-related move to the Southeastern Conference and now makes its own trips to Alabama, South Carolina, and Florida.

Do these moves make sense from a student-athlete perspective? Maybe they do from a football standpoint. For the rest of the athletes, however, they miss more class and likely have fewer games their families can attend. The athletic experience they get from playing a Texas school of their caliber is no different from that gained playing one from further away. So we can conclude that football-based conference realignments may well not benefit non-football athletes.

Do the moves benefit the states in which the schools are placed? If long road trips create a lesser academic experience for student-athletes at the schools, that isn’t good. From a fiscal perspective, it seems likely they spend a lot of unnecessary money on non-football travel. The state’s residents may also be hurt economically from scheduling. Let’s face it, a Texas vs. Texas A&M game in any sport is going to be a bigger draw than A&M vs. Vanderbilt or the Longhorns vs. WVU. When the Aggies travel to TCU, Baylor, and Texas Tech, the sales tax dollars generated at local restaurants and hotels stay in-state instead of going to Mississippi or Georgia coffers.

The Aggies may make the case that they bring more TV money to Texas from their move to the SEC than they would have if they had stayed in the Big XII. Indeed, the $31.2 million distribution their conference gave them exceeded the $25.2 million Big XII schools pulled in from theirs. However, each Big XII school retains its rights to so-called third-tier games, and revenue from those might well have come very close to making up the difference. One has to also factor in losses from travel and in-state rivalries to perform a true analysis of the costs and benefits to the state as a whole.

These issues aren’t limited to Texas, either. The Rutgers to Minnesota, Miami (FL) to Boston College, and Arizona to Washington State sojourns leave a lot to be desired, too.

So what’s the solution? If the conference alignments work for football but not for other sports, perhaps the solution is to give football its own special treatment. Set up conferences for that sport that are as national in scope as you want them to be and put the other sports into conferences that make more sense geographically.

Would it work? We already have single-sport conferences in sports without universal participation, like Hockey East or the Midwestern Intercollegiate Volleyball Association, and a number of non-football Division I conferences. BYU’s and Notre Dame’s league arrangements cover most of their sports while leaving football independent. It’s not like colleges have placed any value on stability of conference membership in the last 20 years anyway. Frog fans, remember the WAC and the Mountain West? Or those car trips to Southwest Conference road games?

What would it take to blow up the conference structure? It might need to start with legislation from some budget-minded legislators (if that’s not an oxymoron) in affected states – probably large ones. Or perhaps it could result from a movement started by university presidents eager to make their bottom lines look more robust.

One of the trickiest parts would be the unraveling of current conference television deals, especially those with league-specific networks attached, like the Big Ten Network and the SEC Network. They need the non-football sports to provide enough programming for them to work. It’s possible they could transition to becoming general-interest collegiate sports networks (ESPNU 2, for instance), initially retaining the rights to the individual schools they currently serve through the incumbent system.

Men’s basketball, the second-largest revenue generator among collegiate sports derives most of its take from the March Madness TV deal. It would have to recalibrate the way it splits its money, too, since some of it gets distributed at the whim of conferences. It would take some complicated negotiation, but it could be done.

One hurdle will be stakeholders invested in the current conference system. I sympathize, because they have worked hard to build conference brands over the years. I suggest they embrace the change, because this solution would actually create more conferences. More conferences means more jobs for people like you and me.

In the long run, would a split of football into its own conferences mean more jobs for better-educated student athletes and for Texans who see more monies stay in-state? At the very least, it sounds like a good research project for some bright student-athlete Econ majors – once she gets back from that tennis trip to Morgantown, that is.