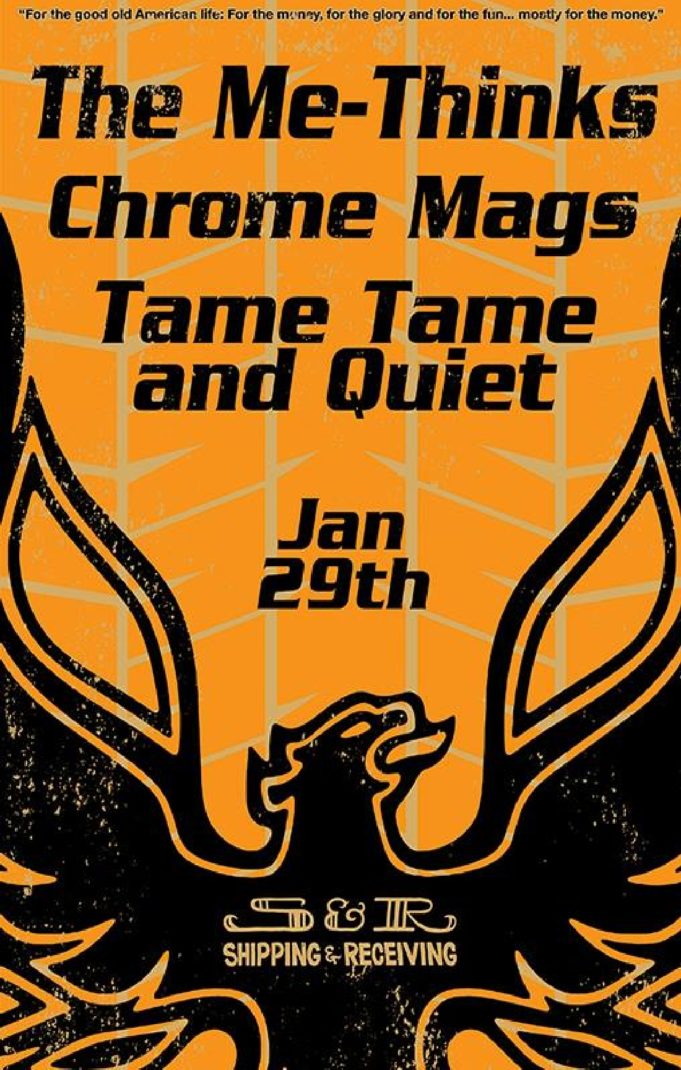 1) Tribute band listing alert: per the Keys Lounge website, on Friday (tonight), there’s a “national touring Rolling Stones tribute band” called Satisfaction. This is different than what Big Mike does in that this band evidently travels the country playing Stones covers, but they also dress up like the source material, putting them indeed in the “tribute act” category. As a point of information, Keys has a similar show on Saturday with Me and My Monkey, the long-running Beatles tribute from North Texas.

2) Shipping and Receiving gets loud and rowdy tonight, with Haltom City fuzz lords the Me-Thinks headlining a three-band bill that also includes surf band The Chrome Mags, and Tame Tame and Quiet. The Chrome Mags play a lot of classic surf material, so I guess they’re kind of a cover band, but all three of these acts make a lot of fun music.

3) Local art gang Piranha Bear is back in action after a brief period of dormancy with an art show at the Collective Brewing Project from 4-8pm on Saturday. Feast your eyes on a variety of work across multiple media from Jay Wilkinson, Jeremy Joel, Beka “Squirt” Johnson, Gemma Hobs, Jack Russel, Pussyhouse Propaganda, and a bunch of other local up-and-coming artists. Live music comes courtesy Americana chanteuse Summer Dean and folk singer Wesley Geiger. Better yet, the event is free admission, saving you cash for craft brews and art, so that artists may buy themselves their own craft brews.

4) The Grotto’s Saturday night lineup is heavy on sludge and doom: Dead Hawke anchors a high-gain bill filled out with Bathylite, Justinian, and Kin of Ettins. If you’re a fan of magical entities, Roman history, or two-headed D&D ogres, these names should pique your interest, as will the music should you like punishing, megalithic riffage.

5) The biggest show of the week is down here at the bottom, but don’t let that deter you because it’s War Party’s release party for To Love and Fear It, their latest full-length album. Of the handful of songs I’ve heard, it makes a pretty exciting stylistic shift – oh sure, they’re still a punk-leaning rock band with lots of singalong hooks, but the new material sounds like a band really hitting its creative stride. Sealion, War Party’s surf riding (well, in their imagination, probably) homies from Dallas are direct support, with the Thyroids and Andy Pickett in the opening slots. The venue is a place called the Under Where, which is actually the dearly departed Where House’s main man Casey Smith’s workshop. Viva la Where House, etc., but this show will feel more like a rad party because the place is small, and everyone in these bands seems to know each other, and you probably do, too. The Under Where is located at 2261 College Ave.