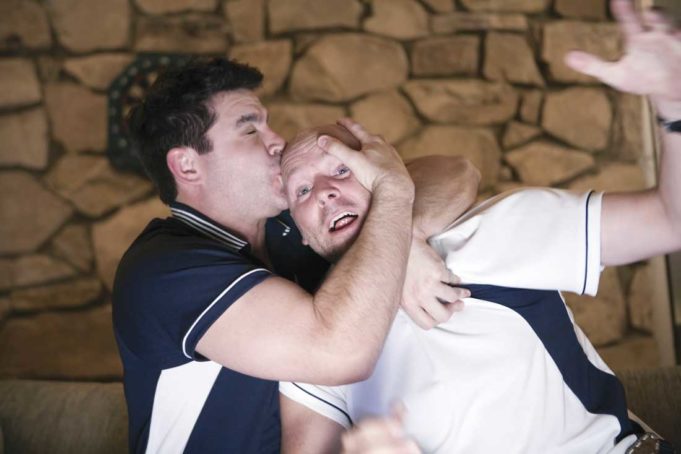 Sports isn’t a groovy kind of love. It’s a passionate, scream-at-your-partner, declare-your-undying-affection-10-seconds-later, sacrifice-your-dignity-for-a-moment-of-pure-ecstasy sort of love. Basketballer Michael Jordan famously had a “love of the game” clause written into his contract allowing him to play basketball whenever he wanted, just because he adored it so much. As we prepare for the holiday that honors former Rangers and Expos outfielder Ellis Valentine, we reflect on the most lovingly named players in sports.

Kevin Love, for instance, is a U.S. Olympian who plays for the Cleveland Cavaliers. The NBA has a pretty strong track record in the affectionate nomenclature department. Bob Love might have been the greatest pre-Jordan Chicago Bull, and 1950s standout Clyde Lovellette made the Hall of Fame. The latter’s last name kind of sounds like a pet name, yes? As in, “Oh my sweet little lovellette, you have eyes that shine like sapphires.”

The late Darryl Dawkins broke backboards like they were teenagers’ hearts and claimed to have come from the planet Lovetron. And forget-you-not former Portland Trail Blazer Darnell Valentine.

The other major U.S. sports have married into the loving family. The Rangers once employed Bobby Valentine as manager. A player called Slim Love played in the majors between 1913 and 1920, his moniker reflective of the chances single dudes with tribal arm tattoos and smokeless tobacco habits have of getting a date on Valentine’s Day.

The Tampa Bay Buccaneers recently broke up with their coach, Bears ex Lovie Smith. Receiver Edwin Lovelady played three games for the New York Football Giants in 1987. However, many of his fellows no doubt viewed him as a fickle harlot, for he was the side guy of the sport, a replacement player while the regular NFLers were on strike.

In the NHL, Ben Lovejoy plays defense for the Pittsburgh Penguins. Might he have a chance to score against the Blackhawks’ Scott Darling, who seems to be a real sweetheart of a guy –– the goalie bought a down-on-his-luck dude he had just met a hotel room and food. And you can’t talk lovely names and hockey without thinking of Flyers and Hurricanes great Rod Brind’Amour. His last name translates to “bit of love.” Probably some non-North American player has a name that means sweet baboo in his or her language, too, and I just don’t have the linguistic skills to realize it.

The nearly similarly spelled Brin d’Amour is a type of cheese, which is a pretty romantic food. So is chocolate, of course. How would you like to get a heart-shaped box of Chocolate Thunder? That was one nickname preferred by the aforementioned Darryl Dawkins.

Speaking of hearts, one of my favorite Rangers general managers was John Hart. OK, I recognize that the spelling says “deer” more than it does “dear,” but it’s pretty close. The Rangers had a player named Jason Hart, and there have been a handful of others with that name to make the majors. Gabby Hartnett became a Hall-of-Famer.

Tennis hall of famer Doris Hart passed away last year. We associate the word “love” with her sport more than any other since the L-word figures into the scoring system. When you have won zero points in a game (or games in a set), you are said to have “love.” Some believe the term came from the French word for egg, but it’s not out of the question that some tennis-playing playa introduced it after not scoring with any Renaissance Kournikovas at the previous evening’s alehouse.

Love makes its way into sports stadiums from time to time. A fan will hold up a sign asking some player to marry him or her. Someone will try a wedding proposal on the scoreboard video screen. The kiss cam might thrust romance upon unsuspecting couples. And if you go to a game in Toronto’s Rogers Centre (née Skydome), you always have a chance to see a whole lotta love going on in the field-facing rooms of the stadium’s built-in hotel. Some people don’t seem to realize that glass is clear (or maybe they do –– exhibitionists can love the national pastime, too).

Nothing says sports more than the term “bromance.” Men have been getting in trouble for years for seeming to care more about whether their favorite player wins a ring than whether they buy one for their lady.

Sports and love both inspire inexplicable passion. They really are a perfect match. Heck, the NBA even scheduled its All-Star Game for this Sunday, the 14th. Hopefully, I’ll get home in time to watch it after driving back from a rugby match in Round Rock the night before (for work –– really!). Sport doesn’t take Valentine’s Day off, because sports love is forever.