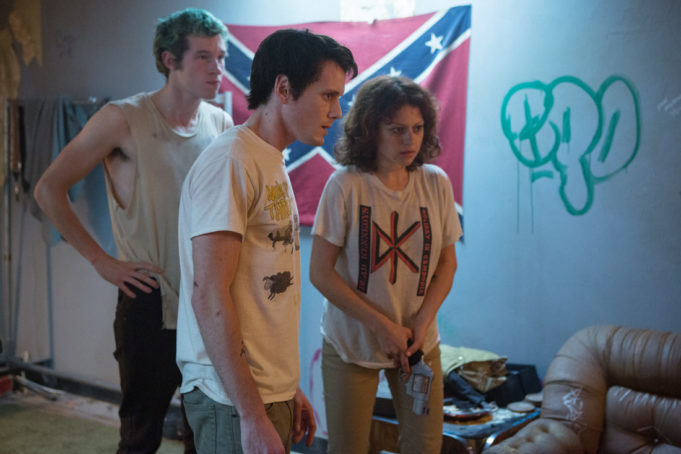 Jeremy Saulnier’s superb low-budget revenge thriller Blue Ruin made my list of 2014’s best films, but its scant distribution kept mass audiences from seeing it. His follow-up Green Room is opening on many more screens this week, and this intelligent, mordantly funny, unrelenting siege thriller is just as good an introduction to Saulnier’s blazing talent.

It begins with The Ain’t Rights (Anton Yelchin, Alia Shawkat, Joe Cole, and Callum Turner), a D.C.-area punk band winding up a disastrous tour of the Pacific Northwest, playing a bar in the Oregon backwoods despite being warned that the place is run and frequented by white supremacists. Bravely or stupidly, the band leads off its set with a cover of The Dead Kennedys’ “Nazi Punks Fuck Off,” but they don’t land in serious trouble until they go back for their stuff in the green room and find the headlining band there with a freshly murdered girl. The Ain’t Rights become hostages along with the victim’s best friend Amber (Imogen Poots), and these unarmed musicians must figure out a way past the neo-Nazis outside, who have guns, superior numbers, and attack dogs trained to rip out people’s throats.

If you didn’t see Blue Ruin, you may be unprepared for the gruesome deaths that meet both the band members and the skinheads. The gore frequently overlaps with the film’s black comedy, as people on both sides prove incompetent, with one bad guy making dreadful hash out of pulling his knife from the dead girl’s head. A running gag about the musicians’ “desert island” bands leads to a great joke at the end, as well as a Prince reference that’ll hearten the late singer’s fans. These human touches make the chaos more horrifying, as do the tenderer moments when Amber stops to kiss her dead friend’s forehead or when the Nazis’ dog handler (Kai Lennox) expresses concern for his vicious animals’ welfare. Stressful circumstances bring out the resourcefulness in Saulnier’s characters, and the Ain’t Rights find ways to use duct tape as bandaging and the club’s sound system to repel the dogs.

The Nazis are no slouches in this department, either, which they get from their leader (Patrick Stewart). Much has been made of Stewart being cast against type as a villain, and the British actor smartly underplays as a hate-filled man with surprisingly little anger. This makes him all the scarier as he arrives at the club and calms his panicking followers, directing them in an efficient, businesslike manner about killing the musicians so their deaths can be staged as an accident. Stewart’s unflashy evil centers the movie, and he does it without even raising his voice.

He’s matched by his compatriot Poots, who seems medicated here as she stands in the background and tonelessly gives commendable advice to the musicians, ranging from blocking the door to executing her former friends. Amber’s flat affect, comfort level with bloodshed, and history with the white-power people are all accounted for in a single unexplained line: “The people who hurt me weren’t white.” Even when she’s using a boxcutter to open up a large bouncer, she’s eerily disengaged from the carnage. In the midst of all this violent mayhem, the cooler heads prevail, and both she and the villain embody the icily controlled brutality that characterize Jeremy Saulnier and Green Room.