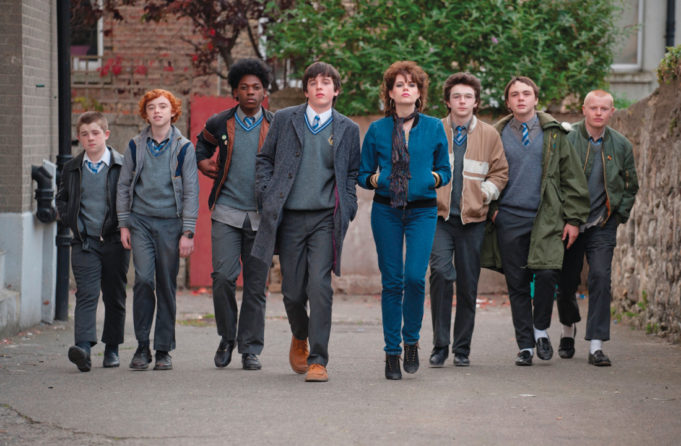 It’s official: John Carney is making the best movie musicals anywhere in the world. The Irishman burst onto the scene with his Oscar-winning 2007 debut Once and his 2014 American follow-up Begin Again. His autobiographical latest film may just be his best work yet. Sing Street is certainly the best of the glut of music films currently out, a better Irish romance than Brooklyn, and the most inspiring thing I’ve seen all year. If it sounds like I’m overselling this, well, this jewel stars no one you’ve heard of and needs our help as it expands to Tarrant County this week.

The movie begins in Dublin in 1985, where 14-year-old Conor Lawlor (Ferdia Walsh-Peelo) has been pulled out of school because his parents (Aiden Gillen and Maria Doyle Kennedy) can no longer afford the tuition. Transferred to a repressive, all-boys, Christian Brothers-run institution, Conor finds one nice thing about his new school: Raphina (Lucy Boynton), a pretty, tragically hip girl who hangs out on a stoop across the street. When she says she’s an aspiring model, Conor tells her that he’s in a band that needs a model for a music video, then goes about hastily recruiting his fellow students to make his lie come true. The new band is called Sing Street, a play on their school’s name.

Acting in his first film, Walsh-Peelo is a hell of a find. He turns 16 this year and looks 12 in the movie, but he sings in a devastatingly confident tenor and exudes stage presence when Conor is fronting his band. He’s called on to do even more than this when Conor gets beaten down, by the school bully (Ian Kenny) and later — not to mention worse — by the headmaster (Don Wycherley) after he dares to show up to class wearing makeup. This kid doesn’t put a foot wrong. The part needed a rock star, but Walsh-Peelo is a real actor, too, which is even better.

Conor needs his resilience, because he’s surrounded by people with broken dreams. His country’s mired in a recession. His parents are too busy screaming at each other to notice him. His supportive, hash-smoking, dropout older brother (Jack Reynor) is inwardly seething over the waste of his own life. The bully is, unsurprisingly, being beaten at home. Raphina’s too-cool-for-school hauteur hides a tortured background, an abusive older boyfriend, and empty-seeming talk of leaving to find work in London. The miserable backdrop makes this movie’s musical joys that much more piercing and lends a near-existential urgency to Conor’s quest to find his musical voice — if a kid this talented and driven can’t make it, what are we all here for?

Luckily, his fictional band kicks actual ass. Carney, a former musician himself, always shows us his characters doing things that musicians actually do, listening to records together, testing out new ideas, and fine-tuning the results. The songs, written by Carney himself and 1980s sophisti-pop singer Gary Clark, are consistently shiny and high-quality. The Duran Duran-influenced “The Riddle of the Model” boasts an infectious stomping rhythm, while the romantic ballad “Up” is an enchanting breeze off the Irish Sea, and the punk song “Brown Shoes” is a pleasingly tuneful ode to sticking it to The Man. Even these pale beside “Drive It like You Stole It,” a headlong-rushing carpe diem anthem that practically dares you not to clap along to the chorus.

That last number is where the movie soars highest, because it becomes the music video that Conor imagines for the song, a Back to the Future-inspired 1950s sock hop with Sing Street in burgundy tuxedos on the stage and choreographed dancers on the floor of their gym. Conor doesn’t have the money to make his vision a reality, but Carney (who’s roughly the same age as his hero would be today) now does. Whether by experience or the bigger budget afforded to him here, Carney has added visual flair to his repertoire, and he executes some assured tracking shots and musical montages as well as a loving pastiche of 1980s music videos when Sing Street shoots its first. When the sock hop starts up, though, it’s pure magic. You get the sense that Carney has been waiting to film this since his adolescence, and how many of us have brought our teen fantasies so gloriously to life?

It’s ironic that Carney made his cinematic reputation in Ireland when all his movies are about musicians who leave their homelands to start their careers. Sing Street ends with Conor looking blissfully happy while he’s being pelted with seawater on his way to England. His future may be uncertain, but he’s going everywhere.