Would it seem stereotypical to assume tackles, guards, and centers should really love an event that revolves around food?

New Dallas Cowboys center/guard Joe Looney thought the characterization fit. “You get to eat and have a good time – nothing better for an offensive lineman,“ he said of Sunday’s 12th Annual Taste of the NFL event at AT&T Stadium. The Cowboys and their co-hosts, the North Texas Food Bank, bill it as the Ultimate Tailgate Party, and even the running backs do go there to eat.

“Some great eats and it’s benefiting a great cause“ said newly signed ‘Boys rusher Alfred Morris. “I tried every meal they had except the pork bellies.”

Morris had heard that the pork bellies were, in fact, superb and vowed to sample them before leaving. All of the food should taste good, considering the event books 20 of North Texas’ top chefs to prepare it. Kent Rathbun of Abacus in uptown Dallas organizes his local brethren to each prepare a single original dish. Attendees wander from station to station filling up on the various concoctions.

“Having a good mix of chefs and foods and wines makes the party,” said Rathbun. 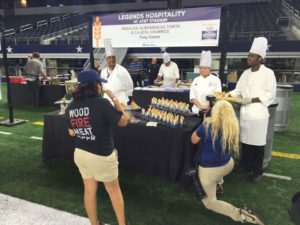 Despite the myriad of tasty options, it turns out the Cowboys players and alums who involve themselves in the event do so for reasons beyond feeding their own bellies.

“Childhood hunger is near to my heart,” said center Travis Frederick.”It’s (the Taste of the NFL event) a great way to raise money.”

Frederick has become a leader among the linemen in supporting the Taste of the NFL. This year, he even volunteered himself to accompany some live auction winners on a bowling trip to PINSTACK. His enthusiasm for the cause inspires his teammates to participate as well.

“He volunteers for everyone to come here. He doesn’t tell us we have to come, but we want to be here for that guy.“ said Looney.

Four members of the o-line even got to play quarterback Sunday. During the live auction’s final phase, auctioneer Wendy Lambert invited the crowd to contribute to an NTFB fundraising goal. The first twenty or so donors got an autographed football thrown to them from the stage by Frederick, Jared Smith, Tyron Smith, or Charles Brown. We saw more spirals than ducks from men whose day jobs often revolve around helping someone else pass effectively. Some of the donors/receivers even successfully caught the passes standing on the turf where the Cowboys play their home games.

The event took place mostly outdoors last year, with food stations and a stage set up on the plaza just west of the stadium. Weather concerns moved the 2016 event inside, where chefs, musicians (Downtown Doug and Jack Ingram played sets), and other VIPs could be sheltered. The function exceeded its fundraising targets, perhaps allowing the Cowboys to declare it the first win of the year on their home field. Those funds will provide nutrition for some important recipients.

“All the proceeds go to our child programs for the North Texas Food Bank. That includes Food 4 Kids. That includes our after-school programs,” explained Lora Farris, the food bank’s Senior Manager of Marketing.

In addition to the good they have done for local youth in need, the Cowboys can also make the case they have one-upped their biggest rivals.

“This is an awesome event. At the Redskins, we didn’t do this one,” said Morris of his former team. “I’m going to give them a call and tell them to do this one.”

His first call should probably go to the linemen.

Disclosure : An event company associated with the event hired me to produce some videos for it