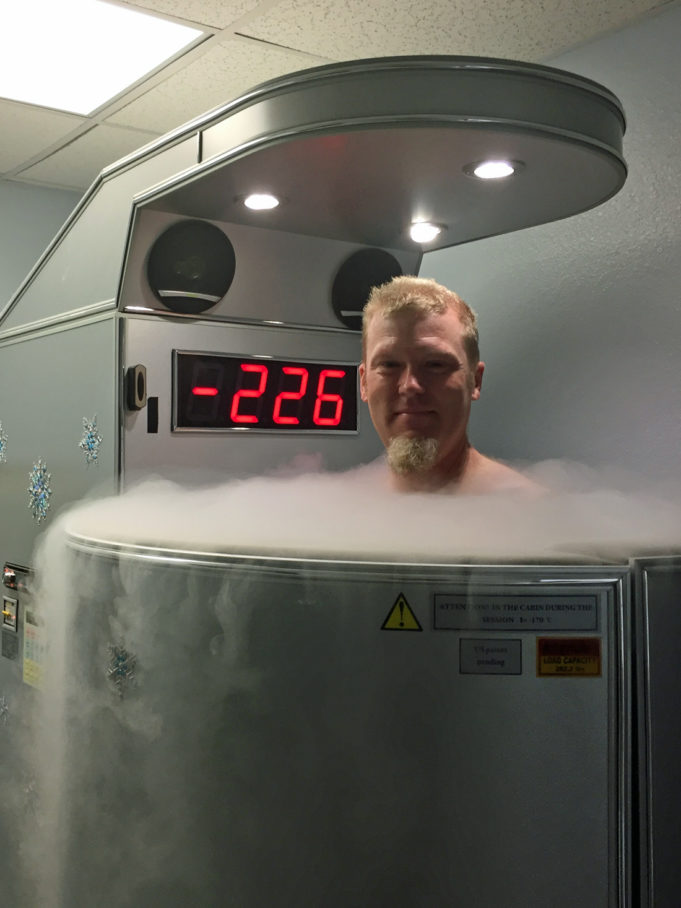 I just tried the hottest trend in sports recovery.

Or at least as hot as you can get at 240 degrees below zero.

When you play sports your whole life, you inevitably run (or stumble) into situations where you have to “put some ice on it.” We’ve all filled plastic bags from the freezer to place on sprained ankles and sore shoulders. The method I sampled is an ice bag on steroids (OK, bad choice of recovery metaphor there).

Wearing only gloves, socks, and a pair of plaid boxer shorts (your underwear selection may vary), one steps into a shoulder-high cylinder which floods with chilled nitrogen gas. Then the chamber gets cold. Really cold. Snow Miser cold.

I had my session at C3 Cryo Club in Burleson. Owner Lisa Flynn monitored the machine as it rapidly lowered the numbers on the attached thermometer.

I had played softball the night before and run more than usual (fallen over more, too). I hoped the cryotherapy would alleviate some of the inevitable muscle soreness. Flynn became aware of cryotherapy thanks to an injury of the diamond.

“My son was a freshman in high school, 14 years old. He rolled his ankle running to first base. The trainer told us we needed to take him to have an x-ray. It swelled up pretty bad. He had a high ankle sprain. The orthopedic told us he’d be out of playing three to five weeks. So he came to the trainer and he went and did cryotherapy every other for two weeks, so he did six treatments. After that sixth treatment, he was back on the field running, sliding, playing like he’d never gotten hurt before.” 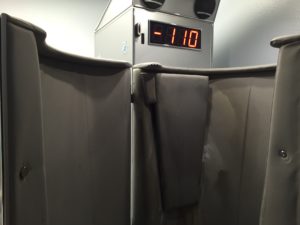 Athletes at all levels have started using the procedure, most prominently in place of ice baths. After her son’s experience, Flynn, a nurse by profession, began to investigate the procedure before eventually opening her own shop.

“We discovered that cryotherapy was actually developed in the 70s in Japan and it was originally developed for rheumatoid arthritis patients. However, it had gotten popular here in the United States in 2011, actually in Texas in 2011, when the Dallas Mavericks used it for their winning season.”

“A lot of people will come in with joint pain, inflammation, just in general throughout their body. They may be or may not be diagnosed with rheumatoid arthritis, fibromyalgia, (or) lupus,” she explained, “It has helped symptoms with those clients so they can have a better quality of life. It doesn’t necessarily cure it, but it does help with the inflammation they experience in their bodies.”

The science behind the treatment involves fooling your body into rushing blood to a core it believes is in mortal danger. Research is ongoing. How did it make me feel? I felt cold. Duh.

I grew up in Texas. I don’t like cold. I’d rather it be 100 every day than ever drop below 60. Luckily, the operator (Lisa Flynn in my case) talks to the subject the whole time to take one’s mind off one’s goosebumps. She also doesn’t leave the groceries in the freezer too long.

“We control the time that you’re in there. You cannot stay in there any longer than three minutes,” Flynn said. “Some people, two minutes, that’s it, every time they get in. The average time is two and a half minutes.”

It was hard for me to evaluate whether I felt better afterward than I would have otherwise after just a single cryo session. But the endurance athlete who recommended it uses it regularly and plenty of other sportspersons do as well. I may have a better idea after the next time I play softball and don’t use it. In the meantime, you can guess what I’ll be thinking about every time the air conditioner comes on.