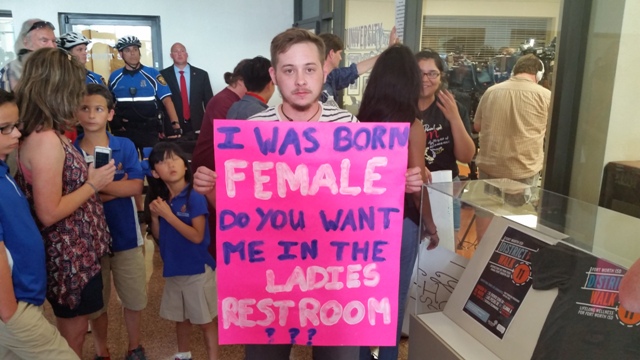 Lt. Governor Dan Patrick took time out of his busy and important job yesterday to come to Fort Worth to remind transgender students that their choice of gender means nothing to him. Patrick was greeted boos and hisses from several protesters. Speaking at Fort Worth school district headquarters on University Drive, Patrick told reporters at the closed press conference that he would start his speech as soon as the camera crews were ready. He used the extra time to adjust his tie.

“When you ask for someone’s resignation, you owe an explanation why,” Patrick said during his opening comments. “That’s one of the reasons I came here today. I believe this policy is ill-advised, wrongheaded, and it violates the Texas education code.”

As Patrick spoke, protesters outside were left to guess at his comments. Many pressed signs against a partitioning glass wall that read “Discrimination Kills. Support trans students.”

One sign, presumably directed at Patrick, simply read “Boo!” Patrick wasn’t without a few outside supporters, though. A young man with a shirt that read “Hillary Clinton for Prison 2016” appeared uneasy surrounded by openly gay and transgender activists.

Alternating with his frequent mentions of “social engineering” were statements reiterating his belief that “every student be protected and not bullied or harassed.”

Patrick estimated the number of transgender students in Fort Worth to be very small, around 1 percent of the student body. In that case, he said, Fort Worth school district officials are asking 78,000 students to change their behavior for a few hundred.

“When parents leave their children [at] school, they expect the students’ rights and privacy to be protected as well,” he said in closing. “In this case, the superintendent is putting the privacy and comfort of 78,000 people in the back seat for a few. Once again, the superintendent needs to rescind this guideline. I believe he needs to step down because he has acted in a way that superintendents [should not]. He’s not focused on the real issue, which is educating students. This has nothing to do with any of that. If he wants to try social engineering, he’s in the wrong job. I do not believe the vast majority of parents support this. This will do nothing but bring chaos and confusion in the school day.”

Fort Worth school district board member Ashley Paz told the Weekly that she was surprised by the recent media attention and visit by Patrick. The guidelines, she said, are aligned with recent decisions by two federal agencies: the Office for Civil Rights and the United States Department of Justice.

Timing may play a role in the right-wing backlash. Several controversial transgender “bathroom bills” recently passed by state legislatures have made headlines.

Last Monday, Patrick released a public statement that called on Scribner to resign.

“Every parent, especially those of young girls, should be outraged,” Patrick said. “I call upon the parents within the Fort Worth [school district] to take immediate steps to repeal this stealthy scheme and remove Dr. Scribner from his post.”

The not-so-subtle fear mongering ploy plays off the idea that hormone-frenzied teenage boys might use the loophole to prey on unsuspecting young girls.

Outside of the press conference, a young, mustachioed man held a sign that read, “I was born a female. Do you want me in the ladies restroom?”

Lou, who asked that his last name be omitted, is 26 and lives in Dallas. He underwent hormone treatments four years ago. The notion that transgender people are a danger to anyone is a lie, he said.

“The reality is that trans people are more terrified of using the bathroom than anyone else,” he said.

“I hate that everyone focuses on the bathrooms, but it is the issue at hand,” he continued. “I’ve been using the men’s restroom for years, and now it’s a problem? It’s not a societal problem. This is being pushed by people who hate us. If they can use the restrooms, they will use it to take away people’s rights.”