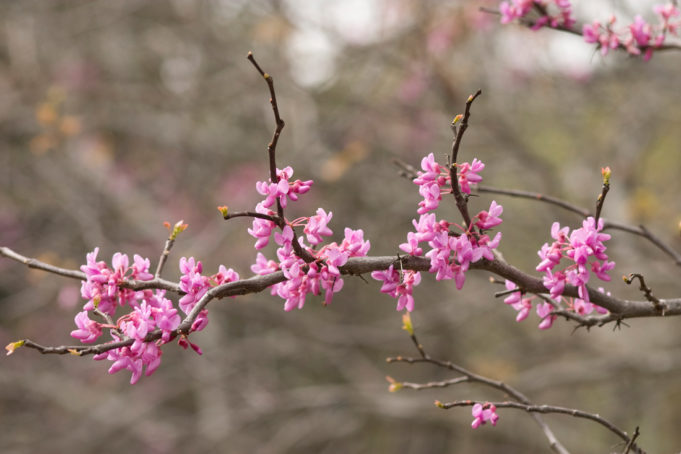 Driving along East 1st Street and Randol Mill Road these days is part reality, part fantasy for longtime East Side commercial realtor Jerry Barton. The reality lies in seeing dozens of young trees freshly planted alongside roadways and inside medians.

“Those are all Texas redbuds,” Barton said the other day, nodding toward trees staked down in a median near Highwoods Trail.

The fantasy is envisioning what will be.

“If you will just see in your mind this whole area planted with trees,” Barton said, “you will be looking at a wall of flowering trees.”

Barton is among about two-dozen residents volunteering with Eastside Blossoms, a group that wants to plant 2,000 flowering trees near streets. They’ve planted about 50 already. Each spring, the trees are expected to explode with flowers and create a colorful canopy. Few things in nature are more beautiful than the pink and purple blossoms that appear on redbuds in spring.

The group is also urging private property owners to plant their own flowering trees. A few residents have responded. Nolan Catholic High School administrators planted 60 blooming trees along Oakland Boulevard. City officials have shown interest as well, vowing to plant 250 trees a year as part of the program.

Eastside Blossoms is trying to raise about $1 million to pay for its flowery dream. The trees must be purchased, planted, staked, and watered at least a few years until the roots are established.

“What we’re trying to do is make our own landscape a living art,” Barton said.

People drive to Washington, DC, to see cherry trees, and they travel to East Texas to see the dogwoods.

“We want those people to have a reason to drive to Fort Worth,” he said. “We think people will come here to see our trees.”

After providing a tour of the area, Barton drove us back to his Eastside office, where various volunteers and movers and shakers congregate on Friday afternoons to enjoy cold beverages, discuss neighborhood concerns, and come up with grand schemes and plans. A dozen or so people were visiting when the door opened and in walked four-time Major League Baseball All-Star and former Texas Rangers General Manager Eddie Robinson, who lives in the nearby Woodhaven neighborhood. He and his wife, Bette, and sister-in-law, Peg Farlow, had each arrived with a $1,000 donation, adding $3,000 to the bankroll.

“That makes $8,000 we’ve raised this month,” Barton said to the applause of volunteers.

The group has about $25,000 in the bank currently, and has already spent about $8,000 to plant trees. They plan to plant 76 more redbuds in the fall at the main entrance of Gateway Park. Beautification plans don’t begin and end on the East Side. Volunteers are spreading their efforts to other parts of the city. For instance, former Fort Worth City Councilmember Danny Scarth is seeking permission and funding to plant flowering trees alongside I-30 from AT&T Stadium to downtown Fort Worth. Eventually, Eastside Blossoms hopes to change its name to Fort Worth Blossoms and spread the green love citywide, Barton said. He points to a similar group called Trees for Houston that has overseen the planting of more than 500,000 trees citywide since the 1980s.

Fort Worth shouldn’t have any trouble besting that piddly little city.