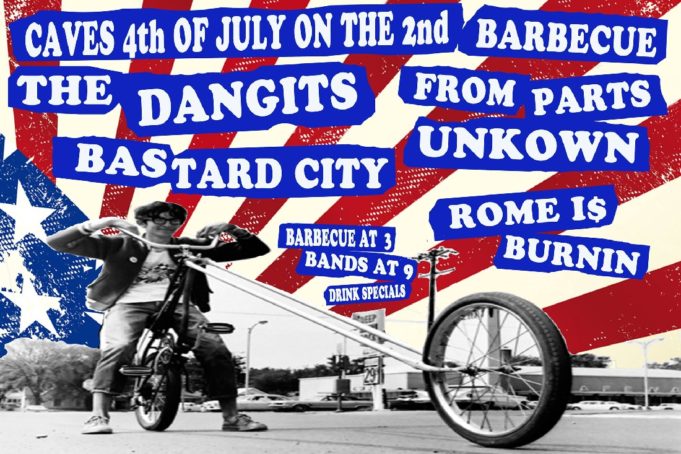 1) Lot of fun stuff coasting into America Fireworks Weekend, though it’s probably a little lower key than last weekend’s MAF2016 double-day showcase, aka the annual Fort Worth music scene fiesta celebrated by drinking years off our own lives over the course of a couple afternoons. Anyway, one option on Thursday: those Dreamy Life doods are spinning vinyl at Republic Street Bar starting at 8pm (Jim Vallee and co. provide a good drinking soundtrack that mixes funk, R&B, rock, and reggae) and there’s free burgers, nachos, and wings. Besides the free food, if you buy a pint of a Rahr beer, you get to keep a limited edition Dreamy Life pint glass. This is a video of Goldfinger playing “Lonely Place” on the Keenan Ivory Wayans show; that show was cancelled in 1998, though I hope it had nothing to do with booking a ska punk band as a musical guest:

2) Un Chien frontman Stephen Beatty is moving to Austin, so it’s fitting that his send-off includes playing a show at Lola’s on Thursday night. Opening for his long-running psych-rock outfit are St. Louis folk-pop band The Hollow Ends, Denton s’90s-indie-influenced rockers The Demigs, and a band from Dallas called Sagacious Zoo. Tip for songwriters: in case you didn’t already know, sagacious, which means “wise,” rhymes with “salacious,” which is a synonym for “lustful.” Words are great, aren’t they? Anyway, be sure to give Stephen Beatty a high-five or a hug, and wish him well on his next endeavors. Check out Un Chien from last year’s Chevy Music Showcase video series:

3) Still need another option for Thursday? Geez, are you also one of those people who bogs down the decision-making process for a group meal by meh-ing over everyone else’s suggestions? Why can’t you just settle for CiCi’s? Not every meal has to be a four-star affair that caters to your highly specific, spoiled child’s palate.

Just kidding, finicky friends! Though I did just have a flashback to a meal I had a long time ago with some buddies, where the super-picky guy in the group made do with whatever restaurant everybody else had agreed upon, only to embarrass us all by dramatically hating whatever it was he’d ordered thinking his sensitive taste buds could tolerate it. Honestly, that guy’s eating motto should be “plain and dry or I’ll act like I’m about to die.” If you’re familiar with how Bugs Bunny can drag out a death scene, imagine a grown man applying those theatrics to spitting food out onto a plate.

Well, regardless of that trip down Meal Memory Lane, the Grotto has a meeting of the Wondercrust Movie Watchers Club, during which its resident comedians will deliver their MST3K-esque riffs and wisecracks over a screening of 1995’s Cyborg 3: The Recycler. Cyborg 3 was the direct-to-video sequel of Cyborg 2, which – fun fact alert – featured the film debut of Angelina Jolie. The original Cyborg has its merits, as it stars Jean-Claude Van Damme when he was more or less reaching the height of his popularity, but I can only imagine that the sequels are increasingly and exponentially terrible, which means it’s ripe for Wondercrust’s team of talented smartasses. Besides the movie, there’s free popcorn courtesy Pop N Cream and a free show courtesy area Foo Fighters tribute, The Foo. The movie starts at 9pm. The following video is of the L.A. Beast eating a cactus, and might not be for the faint of heart:

4) There’s a show in Dallas at the Bomb Factory on Friday that benefits the Feeding Texas’ statewide network of food banks. “Whoa, it’s at the Bomb Factory? They must’ve booked some big bands to fill that place!” you might say. Well, as a matter of fact, the lineup includes Charleston-based folk duo/married couple Shovels & Rope, Austin’s Okkervil River, fronted by singer-songwriter Will Sheff and Matthew Logan Vasquez of Delta Spirit(!), and San Antonio indie-rock trio Girl in a Coma. So yes, pretty big bands. Apparently Matthew Logan Vasquez lives in Austin now and has a solo project, which will undoubtedly interest a lot of Delta Spirit fans. Incidentally, I just noticed that band is named after a couple of airlines. Probably an accident, but still kind of funny if you ask me! Tickets for the show are only $10, and I think that’s kind of a steal. If you like Okkervil River a lot, have you heard this new song? Here it is if you haven’t:

5) Caves Lounge is celebrating the Fourth of July on July 2, with free barbecue on the patio (starting at 3pm until it’s gone) and a four-band bill of rock bands that starts at 9pm with Rome I$ Burnin, followed by From Parts Unknown, Bastard City, and headliners the Dangits. Grilled meat and high-volume rock ’n roll are two of my favorite ways to celebrate American Independence; they’re certainly realer and preferable to the no-nothing, racist and/or say-anything lesser-of-two-evils national sloganeering we’re bound to find crowding its way into our newsfeeds. Hope that didn’t bring you down; here’s a video of Louis CK on Jeopardy from a month ago: