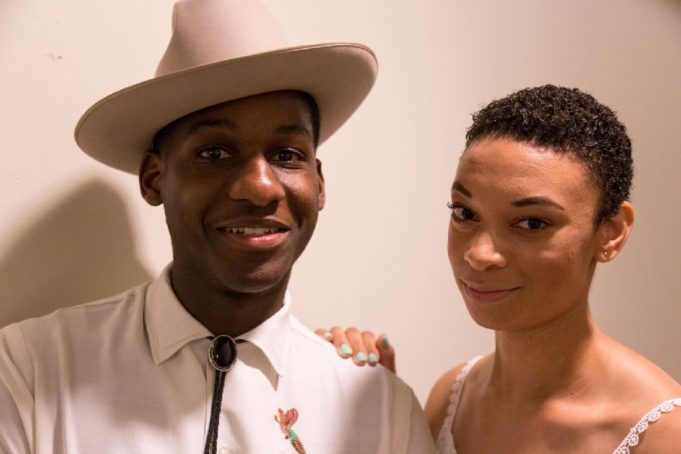 What an incredible year and a half it has been for Fort Worth’s Leon Bridges. A major label released debut album; performances on just about every late-night talk show and Saturday Night Live; an invitation by President Obama to perform at the White House; an Apple commercial; a Grammy nomination … The list goes on and on and on. But there is one thing that can’t be denied: The Kid loves his hometown. Last night, Bridges took advantage of a brief break in his arduous touring schedule to stop by Shipping & Receiving, which was ground zero for Bridge’s meteoric rise –– the studio where he recorded his album is in the same building.

The show was billed as a special screening of “This is Home,” Danny Clinch’s short-form film that focuses on Leon Bridges’ return to Fort Worth following his first world tour, with an acoustic set by the impeccably dressed troubador to follow. The details of the show’s particulars were a little fuzzy. For example, the doors opened at 5pm but the screening didn’t start until 9pm.

No matter. All it seemed anyone cared about was getting through the door, and those who did were treated to a one-of-a-kind evening from a performer who has grown bigger than anyone could have imagined over the past year. The capacity crowd rubbed elbows with a veritable who’s who of the local music scene, Leon’s friends and family, and “Mr. Fort Worth” himself, Ed Bass.

Clinch’s film is a sublime look at Bridges’ return home from his first trek across the globe. It featured a stops in Memphis, where he was asked to perform at halftime of an NBA game, and Little Rock, home of White Water Tavern, the venue that played host to his first sold out show outside of Texas. Clinch, who has built a stout resume shooting some of the biggest names in rock ’n‘ roll, does an incredible job getting to the heart of what home means to Leon. There are cameos by some Fort Worth folk in the film, which can be viewed on YouTube and Leon’s website.

Just after 10pm, Quaker City Night Hawks’ co-frontman Sam Anderson stepped to the mic to introduce Bridges. The presentation was a fitting nod to the days when Bridges, then known around town by the moniker “Lost Child,” would fill the time between Anderson’s sets during his long-standing Tuesday night residency at Magnolia Motor Lounge. Outfitted in gray slacks, a white button-up, tan Open Road Stetson, and bolo tie, the hometown kid took the stage with just his guitar. A short, humble greeting to the crowd followed and the show was underway.

Before the third song, Bridges was joined on stage by a pair of his bandmates, backup singer Brittni Jessie and saxophonist Jeff Dazey, and the show hit its stride. The trio powered through some of Leon’s biggest hits, “Smooth Sailing,” “Twistin’ and Groovin’,” “Better Man,” and “Coming Home,” before Bridges took a break to wax ecstatically about the crowd, his hometown, and the fact that both of his parents were in the crowd. He then kicked into a longtime favorite among those who were lucky enough to have caught one of his shows back in the day: a tribute to his mother, “Lisa Sawyer.” Bridges and Jessie closed the set with a powerful rendition of “River” that had the entire crowd singing along.

Shipping & Receiving demonstrated it is able to handle a show of such magnitude while thrusting itself into upper tier of Fort Worth venues. And the hometown hero, Bridges, proved himself to be the star we all knew he could be, sticking around to sign every autograph and pose for every picture that was asked of him, creating a bottleneck at the opening of the venue’s inside bar.

His homecoming was just as much about the superstar returning to the place it all began as it was a continuation of Bridges’ rise to fame.