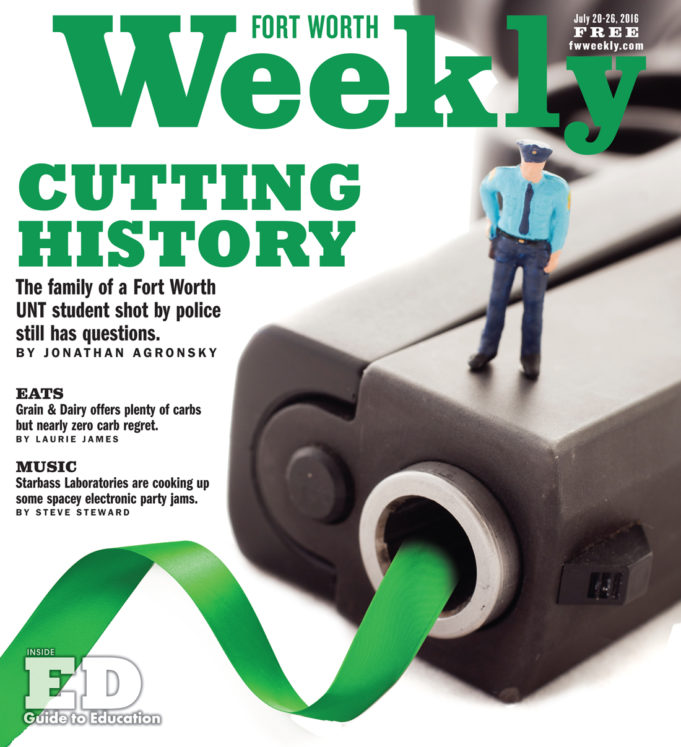 When the first police car rolled up, its blue roof lights flashing in the night, the vandalism suspect — a tall, slender young man with a blond goatee — was standing on the sidewalk of Oak Street in central Denton with two other young men.

Despite the fact that the suspect was holding a hatchet, everyone at that point, based on the images from the police dashcam video which have been made public, looked surprisingly calm.

After the cruiser stopped just a few feet in front of the trio, one of the young men, Ryan McMillan, a sophomore transfer student at the University of North Texas, crossed in front of the car and began to approach the UNT police officer. Corporal Stephen L. Bean had just exited his vehicle to confront the man suspected of damaging several cars in the neighborhood with his hatchet.

It was at that moment, based on published news reports and interviews conducted by the Fort Worth Weekly, that everyone present could tell that McMillan was either intoxicated or in a state of extreme mental agitation. Or perhaps both.

“Shoot me!” McMillan can be heard saying to the 27-year-old lawman, who had immediately drawn his service pistol.

“Back away!” ordered Bean, who himself had begun backing away from McMillan. But the suspect continued to walk toward the officer and to repeat his provocative demand.

Just 15 seconds after arriving on scene, and 10 seconds after putting boots on the ground, Bean pumped four high-powered slugs into the chest, arm, and abdomen of the spaced-out college student. McMillan dropped his hatchet, then crumpled onto the pavement like a puppet whose strings had been cut.

“Shots fired, Fry and Oak!” Bean can be heard barking into his lapel mic a few seconds later. “I’ve got a white male down with a hatchet in his hand.”

Just eight seconds after Bean unleashed his deadly fusillade, another UNT police officer arrived on scene, soon to be followed by eight additional patrol units from both the UNT and Denton police departments.

At least half a dozen people witnessed the shooting, including a 22-year-old Denton resident. Alexzia Jaramillo was walking along Oak Street, toward the Fry Street bars with her boyfriend, Antonio Gutierrez, and another couple, when Bean’s patrol car pulled up directly across from them.

“We saw the cop jump out of his car,” she recalls, “and we were like, ‘Oh, someone’s getting arrested. You know, that happens a lot on Fry Street. So we stopped and watched, and it felt like a split second. Bean said, ‘Freeze!’ Ryan looked like he stumbled, took like three or four steps, and then got shot. And then we’re like, ‘What the fuck just happened!?’ So that’s when I got out my phone and started recording. It was about 20 to 30 seconds after the shooting happened.”

“You just killed a man!” Jaramillo can be heard shouting at Bean on the video as two police officers crouch over the dying suspect, one of whom appears to be handcuffing him as other officers holding flashlights secure the scene. “Why!?” she angrily demands.

Bean did not answer the young woman’s question, and because UNT rejected my request to interview him, I cannot tell you what went through his mind in the two or three minutes that elapsed between his hearing a police radio report about a “criminal mischief in progress” and his pulling the trigger. 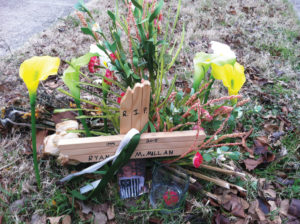 While Bean’s motives for shooting McMillan could eventually be revealed in a future civil court proceeding stemming from a lawsuit that McMillan’s parents, Walter McMillan and Gina McMillan-Weese, may bring against UNT, we may never know what caused McMillan to go on a car-bashing rampage, then challenge a pistol-packing police officer to an unwinnable duel. Nothing in McMillan’s background would suggest he was capable of such behavior. In separate interviews I conducted with friends, family members, and one of McMillan’s former employers, the native Fort Worthian is described as gentle, sweet-natured, and shy almost to the point of meekness. They stressed that he had never been in trouble before — not at home, not in school, not at work, and certainly not with the law. What could possibly have caused such an agreeable, squeaky-clean young man to suddenly and violently snap?

While there may be no definitive answer to this question, everyone familiar with these events knows that alcohol played a role. The autopsy released by the Tarrant County District Attorney’s office revealed that McMillan’s blood alcohol level was .21. That is nearly three times the .08 legal limit for driving in Texas. Had the young man continued drinking, say experts on the medical effects of alcohol consumption, he would have soon become comatose (after reaching a level of .3) and possibly could have died of alcohol poisoning.

McMillan’s story, while tragic, is hardly unique. Last year, excessive drinking by college students reportedly led to 1,825 deaths, and, says the National Institute on Alcohol Abuse and Alcoholism, more than 690,000 assaults. Some universities, such as Stanford, Tufts, and Maryland’s Frostburg State, have taken aggressive, sometimes quite imaginative steps to tackle this troubling issue head-on. But many others, apparently including UNT, have no effective programs in place to address it.

At these institutions, the responsibility for dealing with students abusing alcohol or drugs frequently falls to the campus police, who often are understaffed and overworked. At UNT, whose campus is an enormous 875 acres, just 44 sworn peace officers are dedicated to policing and protecting nearly 37,000 graduate and undergraduate students, along with almost 5,000 additional members of the teaching faculty, athletic department, maintenance, and administrative staffs. An analysis of the department’s daily activity logs, copies of which were obtained by the Fort Worth Weekly, shows that, day after day, week after week, UNT officers’ most frequent contacts with students involve illegal drug possession, underage drinking, and public intoxication –– in other words, students like Ryan McMillan getting wasted and doing stupid things.

Normally, an intoxicated student will receive a written citation (ticket), or, if proving to be particularly unruly, he or she might be arrested and compelled to spend the night in jail. Incidents such as the one that took McMillan’s life are extremely rare. Until Cpl. Bean shot the student, according to published news reports, no UNT officer had discharged his weapon in the line of duty for at least 23 years. I could find no evidence showing that any UNT student was ever killed by a campus police officer, dating all the way back to the school’s 1890 founding as a teacher’s college. Stephen Bean was placed on desk duty not long after the shooting. In March, he also was cleared of any wrongdoing in McMillan’s death by a Denton County grand jury, whose members had found his actions legally “justified.”

Fort Worth attorney Renee Higginbotham-Brooks doesn’t agree. At a press conference in February in Denton, the attorney representing McMillan’s parents pretty well summed up their position when she said, “Eyewitnesses report Ryan McMillan held a Boy Scout hatchet in his hand in a non-threatening manner as he was shot by the UNT police. No Tasers, no chemical sprays, no tolerance was afforded this young man. Nonlethal force should have been the obvious choice.”