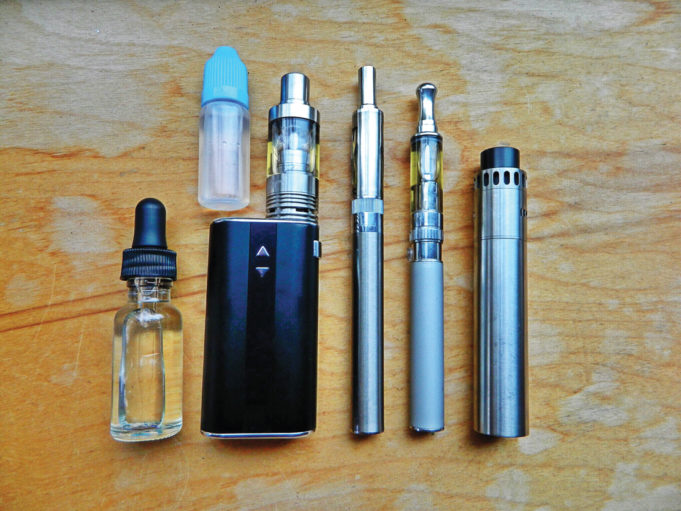 Many people view nicotine vapor products as an alternative to smoking tobacco and more importantly as a path to smoking cessation, said Greg Conley, president of American Vaping Association, a national nonprofit group advocating on behalf of vaping.

And if the Cole Bishop Amendment is passed, vaping might not go down in history as just a passing fad.

Introduced into the Agriculture Appropriations bill for fiscal year 2017, the amendment, H.R. 2058, seeks to go back in time and change a date on the calendar.

In 2009, the Tobacco Control Act granted the Food and Drug Administration regulatory authority over tobacco products and products containing nicotine derived from tobacco. The FDA also was given the authority to bring new products under review.

The act set February 15, 2007, as the predicate date for the products Congress intended for the FDA to regulate. This means that any product on the market before this date is permitted to stay on the market without FDA approval.

The Cole Bishop Amendment, which passed through House committee on April 19, seeks to change the predicate date to August 8, 2016. Conley said this would allow more than 100,000 nicotine vapor products to stay on the market.

Cole/Bishop also would allow manufacturers of any new vaping products to file a substantial equivalence application, which requires manufacturers to show that their new product is substantially equivalent to a product on the market before the predicate date in such a way that the new product doesn’t raise new questions of public health, Conley said.

Tobacco companies and manufacturers of smokeless tobacco products use substantial equivalence or “SE” applications today based on the February 2007 date when attempting to bring new products onto the market, Conley said.

“As of now, the vapor industry will never have substantial equivalence available,” Conley said. “Say a flavor maker goes out of business, and you have to use a new watermelon flavoring, you couldn’t use an SE application. The new predicate date would allow for SE.”

It would still be somewhat costly for smaller manufacturers to do if the date is changed but much less costly than having to file a pre-market tobacco application.

“This means any flavor, flavor strength, coil, battery, or tank part would have to have a separate PMTA filed,” Conley said. “You can see how just one of these would be crippling to a small vapor manufacturer or shop producing its own flavors.”

Like Mid-Cities Vapor. Employees at the Euless-based store make all of the juice in-house and create custom flavors for customers as well as high-end products for consuming or vaping the juice, said Mid-Cities front-end manager Chase Newsome.

A large majority of the customers Newsome sees switched to vaping as a path to quitting smoking, and many have done just that. In fact, the shop recently held a promotion in which customers could bring in a pack of cigarettes and pledge to quit smoking by throwing them away in the store’s trashcan for a vaping starter kit and bottle of juice.

Conley said a big problem in the fight is the lack of awareness of the law and regulations among even manufacturers and shop owners and what can be done about it.

Mid-Cities Vapor, Newsome said, has always tried to stay current on the issue and has attempted to educate consumers.

“We’ve been trying as hard as we can to teach people and to become aware ourselves of what is happening and could happen,” he said. “We want to stay open and help people who want to quit smoking cigarettes. And also to keep money in the community to be able to offer jobs to [U.S. military] veterans and others in the local community.”

The outcome should be known sometime around the end of the year but the wait has already had an effect on the industry and its consumers, Conley said.

Eastern Vapor, the first vapor company to open, located in Boston, recently closed its doors, Conley said, and more closures could follow, simply because of the uncertainty surrounding the issue.

“In terms of what can happen,” Conley said, “stores that have leases coming up for renewal and are asked to sign say a three-year lease may not want to because they don’t know how [the vote] is going to turn out.”

The worry and uncertainty has also trickled down to the consumer, Newsome said. Many are worried about investing in the equipment and enjoying being tobacco-free only to have it taken away.

“I do have quite a few customers that are worried about starting to smoke cigarettes again and not having a choice for an alternative,” he said.

Euless’ Kathryn Johanning has been tobacco-free for three years. She also is taking steps to be nicotine-free in the coming years as well.

“Vaping is a great alternative to smoking for many reasons,” Johanning said. “It’s cleaner, your clothes don’t stink, and, like me, you can gradually lower the nicotine amount in your juice to kind of wean yourself off of it altogether.”

Johanning said she is worried about people who have put in the effort to quit smoking being forced to decide between stopping cold-turkey or going back to cigarettes if the amendment doesn’t get voted in.

“I used to smoke about a pack and a half a day before vaping,” she said, “and I’m sure there are others in my shoes that won’t have an alternative like I did to help them stop.”

Opponents of the amendment say vaping could lead to an increase in youth smoking since some of the flavors appear to be targeted directly at the under-18 crowd.

A joint letter to the U.S. House of Representatives, written on behalf of several organizations, including the American Lung Society, the American Cancer Society, the American Academy of Pediatrics, and the Campaign for Tobacco Free Kids, expresses concerns that the Cole Bishop Amendment would undermine the FDA’s ability to protect the public’s health.

“It would take away an important tool that the FDA could use to make sure that candy and fruit flavors now on the market today do not increase the number of youth who use these products,” the letter states.

Another concern is quality standards, particularly among the shops like Mid-Cities Vapor that produce their own juice, according to The New York Times.

“There are retailers selling these products, but in the back room they are also mixing,” Mitch Zeller, director of the Center for Tobacco Products at the FDA, told the Times. “That means under the law, they are manufacturers.”

Conley said that modernizing the predicate date to August 8, 2016, would allow many shops and manufacturers to stay open and continue the process of acquiring fair regulations.

Keeping the original 2007 date, he said, constitutes a modern-day prohibition.

“Modernizing the date is far from a get-out-of-jail free card,” Conley said, “but it allows a fair way forward for thousands of small businesses.”